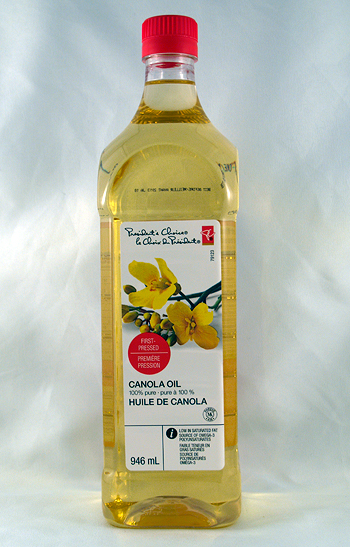 Canola Oil is a cooking oil pressed from a special variety of rapeseeds.

The oil has a very mild, neutral flavour resulting from the high temperature pressing process it is put through.

You can also get Cold Pressed, which has a fuller flavour with a subtle nutty taste, a silkier texture, and is a deep yellow colour. It has a shorter shelf life, though, and is not good for frying in.

The fields that the rapeseed grows in are bright yellow from the flowers. You will see these fields all over England, particularly Essex and Cambridge, and in Canada. The variety grown was developed specially to be low in Erucic Acid (regular varieties of rapeseed are high in it.)

Canola Oil is also known as rapeseed oil, but it was felt that it couldn’t be marketed in North America under that name, owing to a misunderstanding of the “rape” part of the name. It is also called “Low Erucic Acid Rapeseed” (LEAR) oil, but anything that sounds like “leer” probably wouldn’t have done anything to get consumers minds away from the “rape” part. Producers insist, though, that while the Canola seed strain was developed from rapeseed, it is not rapeseed nor is the oil “rapeseed oil.”

Be that as it may, there’s also the fact that the renaming conveniently produced a name that could be trademarked, while the name “rapeseed” could not be.

Canola is a very popular oil now in Canada, China, India and Japan. It is now available in the UK, though still sold there under the name of “rapeseed oil.” In Europe, the Cold Pressed kind is sometimes referred to as “virgin rape oil” (sic.)

Some people say they detect a slight fishy smell to Canola, especially when heating the oil to high temperature.

Canola is one of the healthiest oils. It has only 6% saturated fat (compared to olive oil at 14% and soy oil at 15%).

During the Second World War, Rapeseed Oil was used by the Royal Canadian Navy as a lubricant for ships’ engines.

Rapeseed Oil also had the problem of containing high levels of Erucic Acid, which has shown itself toxic to the hearts of rats in tests. Mustard oil has the same Erucic Acid problem. Canadians kept breeding rapeseed until they developed varieties with very low erucic acid. They bred out the high erucic acid levels, from 40% down to 0.02 to 0.01%, and released the new plant in the 1970s.

The name “Canola” was trademarked in 1978. In 1980, the trademark was transferred to the Canola Council of Canada which encouraged its widespread use, and which even allows it to be used in other countries. The only item that they keep tight control of is the image of the “Canola” flower that appears on some bottles of oil. This image’s use is licensed already in about 2 dozen countries.

Rapeseed is related to the cabbage, mustard and turnip family. The name “rapeseed” comes from the Latin word for turnip, rapum.

The name Canola was invented from the words Canadian oil low acid; though now marketers are saying it stands for “Canada” and “oil.”

Schatzker, Mark. Why Canadians should soak up a canola oil revolution. Toronto, Canada: The Globe and Mail. 30 August 2011.