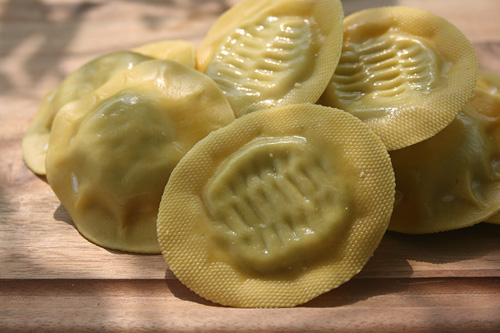 Cappellacci are pasta dumplings, often described as stuffed pasta squares or rounds. They are large, so usually 5 or 6 is enough per person, given that they are usually used in a recipe with other food items such as radicchio, etc.

A typical filling is ricotta and spinach.

They are popular particularly in Ferrara, Emilia-Romagna.

To make them, pasta dough is rolled out into thin sheets, and cut into 7 1/2 cm (3 inch) squares or rounds. The dough pieces are then let rest 5 minutes. Next you turn the squares so that they appear diamond shaped in front of you. You put a small dollop of filling in the centre, mist them with water, fold them in half to make a triangle, then bring the end points together to form a pointy hat like a mitre. (Alternatively, they can be made as large rounds.) You let them rest another 5 minutes, then cook them in simmering water.

Alternatively, at this stage they can be frozen. To freeze, arrange them on a plate not touching each other, then freeze, then bag, then freeze for up to 1 month.

Zucca is often translated as pumpkin, but in fact it is squash. The filling is squash, breadcrumbs, nutmeg, salt and parmesan; some fancy versions add walnuts.

The sauce served with them can be melted butter with sage it in, or a pork and tomato sauce.

Discount stories that say Cappellacci were inspired by a hat worn by Lucrezia Borgia.