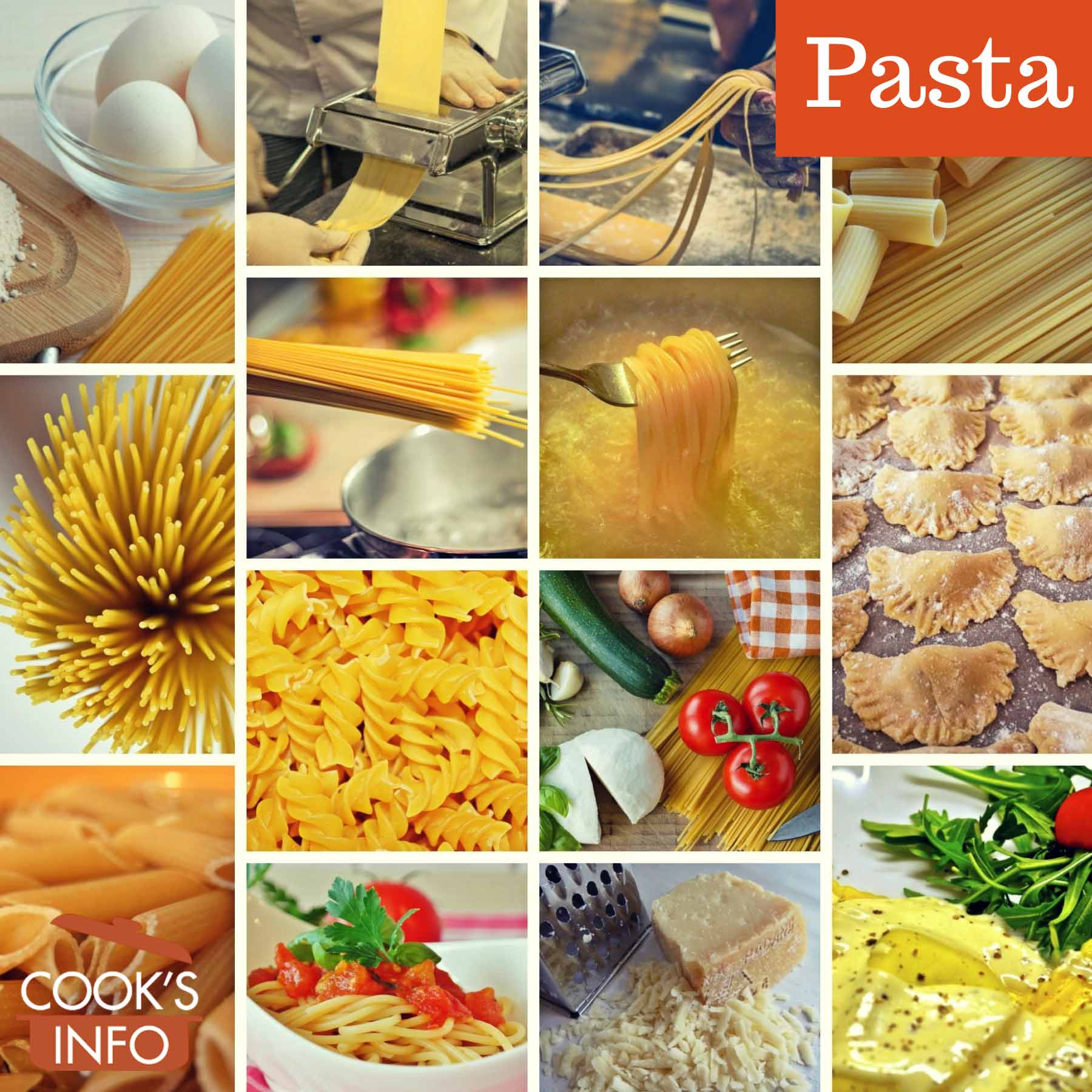 Pasta is dough that is kneaded into small shapes for cooking. The size and shape is based on the function: for instance, very small pasta is used in soups, larger pasta with grooves is meant for chunky sauces as it can get a grip on them, and very large pasta are meant for stuffing and baking.

When eggs are added to pasta dough, it is mainly for the taste and colour they add.

Generally, eggs are added to long pasta and to wide pasta (lasagna, cannelloni, etc.), but not to short pasta.

Unless a specialty pasta is being made, the wheat used in pasta is durum wheat semolina which contains very little starch.

Less water is required to make pasta dough with semolina, as there is less starch to compete with the flour proteins for water. Less water is an advantage if you are going to be drying the pasta, rather than cooking with it immediately, and this is why semolina is favoured in commercial production.

Semolina-made pasta is also stronger, less easily broken, and less prone to go mooshy, because its gluten is very strong.

Pasta is traditionally yellow rather than white because Mediterranean semolina had a colour pigment about double that of normal wheats. Because that is the colour that has come to be expected, semolina is not bleached. See also: Semolina

How pasta is served in Italy

Pasta in Italy is almost never served as a course in itself. In a traditional Italian meal, you may or may not have some antipasti. (These “starters” are called “antipasto”, or “before the pasta.”) Then, you have your first course, the “primo”, which can be pasta, soup, or risotto. The second course, called the “secondo”, is usually meat, and refers to just the meat itself. You have some side dishes with that, usually vegetables, which are called “contorni.” Salad is never served until after the secondo is finished.

Despite the great variety of pasta available, all types usually fall into one of four traditional categories:

The divisions aren’t hard and fast: some pasta for instance you stuff, then bake, and other pasta, such as macaroni, can be used for many different purposes. And, we non-Italians have opened up a fifth, non-traditional use, which is pasta salad.

Even if pasta is to be baked, it is always boiled first. Even the “no-boil lasagna noodles” sold have actually been precooked at the factory.

Understanding why and at what stage of cooking pasta sticks can help you prevent a sticky disaster at dinner time.

“Noodles stick to each other during cooking when they’re allowed to rest closed to each other just after they’re added to the cooking water. Their dry surfaces absorb the small amount of water between them so there’s none left for lubrication, and the partly gelated surface starch glues the noodles together. Sticking can be minimized by constantly stirring the noodles for the first few minutes of cooking, or by adding a spoonful or two of oil to the pot and then lifting the noodles through the water surface a few times to lubricate them. Salt in the cooking water not only flavors the noodles, but limits start gelation and so reduces cooking losses and stickiness. Stickiness after cooking is caused by surface starch that dries out and cools down after the noodles have been drained, and develops a gluey consistency. It can be minimized by rinsing the drained noodles, or moistening them with some sauce, cooled cooking water, oil or butter.” [1] McGee, Harold. On Food and Cooking. The Science and lore of the Kitchen. Second Edition. New York: Scribner. 2004. Page 576.

Any vegetable in your pasta dishes is supposed to be the same size as the shapes of pasta that you use.

Fresh pasta cooks faster than dried, as it doesn’t need to rehydrate first.

There are really only two things that can lead to pasta disasters. Too little water, and forgetting about the time and overcooking it.

It’s a myth that you should put oil in the cooking water. This myth started a few decades ago. You would only add a bit of oil if you were boiling sheets of lasagna, to stop them sticking to each other and tearing when you try to get them apart. Otherwise, oil in the water really just floats on top (basic physics, if you think about it), and because it will adhere to the pasta as you dump the pasta out, it can stop your sauces from coating your pasta properly.

Noted food research Harold McGee found that the oil on the surface of the water is only of any benefit if you lifted the cooking pasta a few times out of the water, so that surface oil can coat the pasta, but few home cooks are likely doing this.

How to cook fresh pasta

To cook fresh pasta, bring the water to a boil. Dump the fresh pasta in, and when the water returns to the boil, the pasta is cooked.

How to cook dried pasta

Plan to have twice as much water in the pot as you do pasta, enough that the pasta can move freely about in the water. Bring the water to a boil. Definitely salt the water. Meanwhile, bring your tea kettle to the boil as well.

Add the pasta when the water in the pot has started boiling, and stir a bit. If the pasta takes up 3 inches (7 to 8 cm) in the pot, you want the same depth again of water on top of that to be safe, and you can top up from the kettle if you need to because you were clever and had it boiling. Most pasta disasters come from being stingy with the water.

Don’t cover the pot. Let the water come back to the boil, then stir again to loosen the pieces from each other. Start counting your cooking time from when the water returns to a boil. Most dried pasta takes 10 to 12 minutes to cook, so stir once or twice again during that time.

When cooked (just tender to the bite, as everyone knows by now), drain in a colander. Many cooks advise to never, ever rinse your pasta. It will have some starch on it, but you need that starch on it for the sauce you are about to put on it to adhere well to the pasta.

A reason you might want to rinse it is if you are going to use the pasta for a pasta salad, and want to prevent the pasta sticking together in a gluey mess.

If you cook up too much pasta, or miss the timing on a batch and it goes too soft for your taste, then toss into a freezer bag (plain, before you add sauce) and freeze for your next soup; makes a great addition.

Use fresh pasta within 5 days; store refrigerated well wrapped so that it doesn’t dry out. pasta freezes well for up to 4 months. If you are using frozen pasta, don’t thaw before cooking.

It is a complete myth that Marco Polo brought pasta back with him from China. He found pastas being made in China, that is true, but if you actually read his book, he compared them to pastas already being made back home.

The Etruscans were, in fact, the first that we know of to make pastas in Italy, and the pastas are depicted on Etruscan tombs dating from 300 BC. The Romans made and used pasta a lot, often in soups. For them, it was a great way to convert grain into something that could be stored in a way that was less interesting to pests. In Roman society, the rich would eat fresh pasta, and the poor ate dried (just like today). Dried pasta was mostly popular with the poor in the city of Rome itself. Our word “lasagne” comes from the Roman word “lagana“, meaning wide pasta ribbons. Some Roman pastas were made from chestnut flour.

Pasta started to become popular again in the early 1700s. pasta-making machines were invented in Napoli, making larger production possible. And, this was the time of the grand tour by wealthy English tourists coming to Italy. They picked up a liking for it. “Macaroni” became a term used to describe someone who had developed foreign tastes for non-English food.

Pasta started becoming popular in North America in the 1920s, with the arrival of Italian immigrants.

Most pasta names in English come from the Italian, and are used with little or no change to their spelling (though what we do to the pronunciation is another matter!) We took our word for “noodle”, though, from the German word “Nudel”.