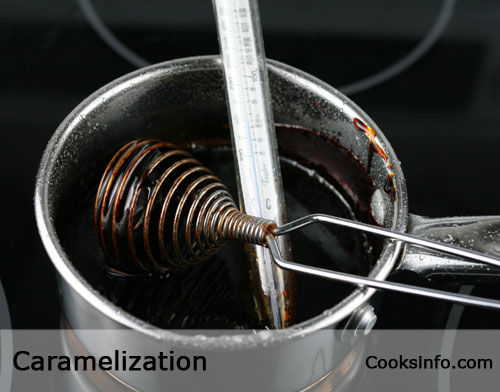 Caramelization (strictly speaking) is the process of sugar turning brown through heat being applied. Water may or may not be added.

To Caramelize is the process of causing caramelization to happen.

It can be done with sugar, by adding sugar, or working with the sugars naturally already in a food item.

In addition to the change in colour, the flavour changes as the simple compounds in the sugars break down, and new ones are formed. What gives caramel a buttery taste and scent is one of the new compounds formed as a result of heating, called “biacetyl”(C4H6O2.) The other new compounds formed are a range of sour, bitter and sweet tastes, which gives caramel its complexity on the palate.

Different types of sugar caramelize at different rates, depending on how much fructose, glucose, etc, the actual sugar is made of. Fructose, for instance, caramelizes faster than glucose. Honey, which has more fructose in it than does white table sugar (which is fructose and glucose), will therefore caramelize faster than table sugar.

Caramelization generally happens after water is gone from a sugar substance, because water limits the temperature to 100 C (212 F.) However, it can start occurring where surface contact makes the immediate area hotter (e.g. the bottom of a pot.)

In classical French cooking, caramelization can be done in several ways:

And, however educated one can be about the science of caramelization and how to make it happen and why it is happening, it still remains a challenge to stop it from happening sometimes, such as when you are making peach jam, or apple sauce, and don’t want any such science taking place at the bottom of your pot.

High altitude: For every 1,000 feet (300 metres) that you are above sea level, subtract 1 degree C (2 degrees F) from the temperatures given in your candy recipe.

The best way to clear a pot in which you’ve caramelized something (by accident or on purpose) is to put lots of water in it and boil it.