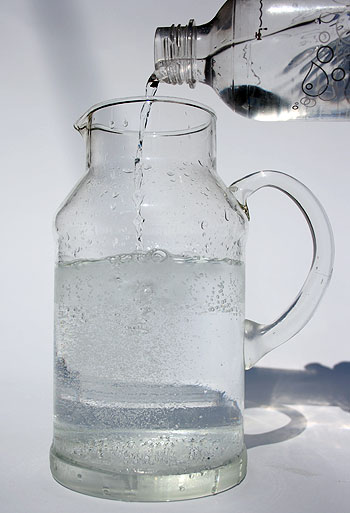 Carbonated water is water that contains a high amount of carbon dioxide in it, CO2, which makes the water bubbly and gives it a tangy taste. It is also known as Seltzer Water.

Carbonated water can be used as a mixer in alcoholic beverages, or to make soda pop from. Some swear by it as a thirst quencher on its own. Some like to use it in making their matzoh balls; they say it makes them lighter.

Carbonated water can be made at home.

One way is through a machine such as the one called “Soda Stream.” These machines are useful if you go through a good deal of carbonated water. Syrups can be purchased that you can add to the carbonated water to make flavoured soft drinks.

Another way to make soda water at home is with a soda siphon. You fill the soda siphon bottle with water, and put the lid on. You then attach to it a small cylinder of CO2, sometimes called a “charger.” They usually come in boxes of a dozen. You should only use food grade CO2 cartridges meant for the soda bottles. Other ones might have some lubricants in them. You screw the cylinder on until it is pierced and the CO2 is released into it. Then, you shake the bottle. Many of the older soda siphons were attached to glass bottles, usually coloured blue.

You get also get flavoured carbonated water, particularly fruit-flavoured. They taste like a weak soda pop.

Joseph Priestley (born 13 March 1733, Leeds, England) was an amateur scientist. He was studying air that was heavier than normal air — we now know what “heavier air” to be carbon dioxide. He figured out how to make carbon dioxide in his own laboratory.

While experimenting with dissolving this heavier air in water in 1767, he discovered that the water got a tangy taste. He received awards from the French Academy of Sciences (1772) and the Royal Society (1773) for his discoveries. In 1794, he emigrated to the States, settling in Pennsylvania. he died 6 February 1804.

In 1783, a process for carbonating water as Priestly had done, but more effectively, was patented in the UK by Jacob Schweppe.

The next challenge was to keep the carbonation in the bottle once the water was carbonated. Previously, corks had been used to keep liquids in bottles, but as the corks dried out and shrunk the carbonation leaked out leaving the water flat.

Though our solution today is to use tight-fitting metal caps, those hadn’t been though of yet, so what Schweppe did instead was make sure that the corks wouldn’t dry out: he used bottles with round bottoms so that people had to lay the bottles on their sides.

The name “Seltzer Water” is adapted from waters from Nieder Selters, a spa town in Weisbaden area of Germany. There, the water is naturally carbonated.

This web site generates income from affiliated links and ads at no cost to you to fund continued research · Information on this site is Copyright © 2022· Feel free to cite correctly, but copying whole pages for your website is content theft and will be DCMA'd.
Tagged With: Soft Drinks, Water