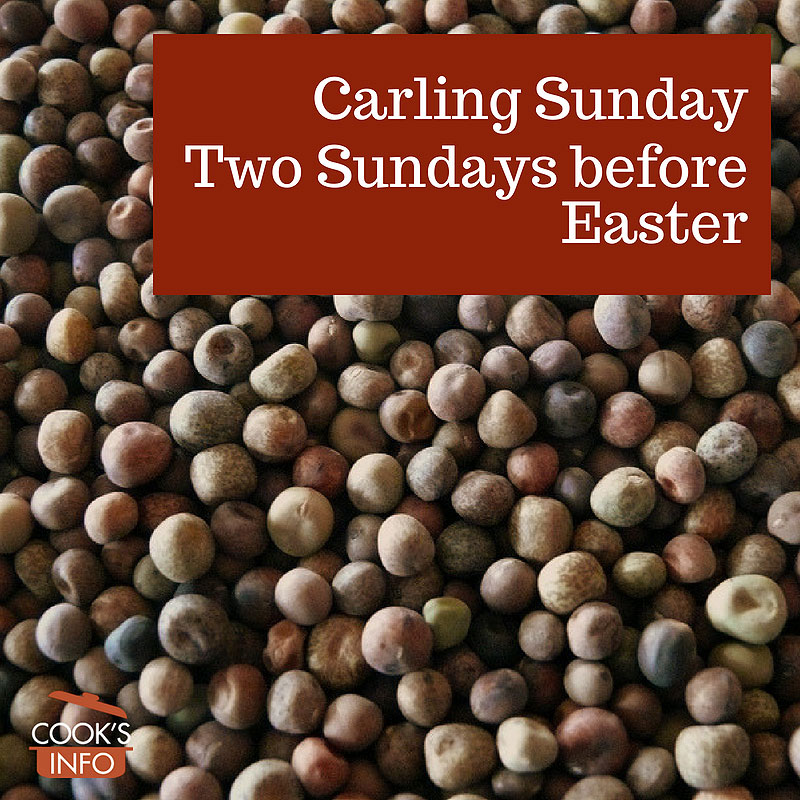 Carling Sunday, otherwise known as Passion Sunday, is celebrated in Scotland and in northern England on the fifth Sunday in Lent, two Sundays from Easter.

Why’s it called Carling Sunday? Why, because Carlings are served, of course — small, dried beans that are re-hydrated then fried. Seasoning is added while frying, then the fried beans may be served with a dash of vinegar or rum.

In Yorkshire, Carlings were made on Mothering Sunday instead of on the fifth Sunday in Lent.

The day was sometimes called “Care” or “Carline / Carlin” Sunday. There are only guesses as to where the “Care” comes from, but Carling is almost certainly “care” with “ling” stuck on the end. Some think it’s actually just from the word “care”, with older meanings such as “mourning”, etc, attached to it.

“So what’s special about carlins? Well, they’re peas, but not as we know them. They’re maple peas, an old variety of field pea with a nutty flavour and a texture like chickpeas. To make carlins, the dried peas are soaked overnight, rinsed, boiled, then fried in butter and seasoned with pepper. This basic recipe was tweaked by adding chopped bacon, onions, and vinegar or a dash of rum. Carlin Sunday survived into the twentieth century in less affluent villages and urban areas, where pubs offered salted carlins in paper cones to drinkers spending their “carlin groat”. The custom was found in Cumberland, and in the east from the Scottish borders to the Humber, but there are no mentions of it elsewhere.” In ancient times when pulses symbolised immortality, ritual dishes of beans were served to guests at Roman funerals. Carlin is thought to derive from care, which used to mean sorrow and grief; Passion Sunday, and Care Week that follows, is a solemn time for Christians who are contemplating the betrayal and death of Jesus.” [1]Elvidge, Heather. Turning Year: A special meal for Passion Sunday. Scarborough, Yorkshire: The Scarborough News. 13 March 2016. Accessed July 2017 at http://www.thescarboroughnews.co.uk/news/turning-year-a-special-meal-for-passion-sunday-1-7785773

“Carling Sunday is so called by the lower orders in the north of England, because it is their custom to eat immense quantities of small peas, called carlings, fried in butter and pepper and salt, on the second Sunday before Easter. This is said, by an old author, to take its rise from the disciples plucking the ears of corn, and rubbing them in their hands.” [2]Pulleyn, William. The Etymological Compendium. London: Thomas Tegg. 1828. Page 192.

Following is an extract from John Brand’s Popular Antiquities. (London: Charles Knight and Co. 1841. Page 61 to 68.). At one point, the author wonders if eating beans in a spring festival could date back to the Roman festival of Lemuria.

“Of Carlings. (4) At Newcastle-upon-Tyne, and many other places in the North of England, grey peas, after having been steeped a night in water, are fried (5) with butter, given away, and eaten at a kind of entertainment on the Sunday preceding Palm Sunday, which was formerly called Care (6), or Carle Sunday, as may be yet seen in some of our old almanacks. They are called Carlings (7), probably, as we call the presents at fairs, Fairlings. Marshall, in his Observations on the Saxon Gospels, elucidates the old name (Care) of this Sunday in Lent. He tells us that ‘the Friday on which Christ was crucified is called, in German, both Gute Freytag and Carr Freytag.” That the word Karr signifies a satisfaction for a fine or penalty; and that Care, or Carr Sunday, was not unknown to the English in this time, at least as such as lived among old people (8) in the country. (9) “

(4) “Carle Sunday is the second Sunday before Easter, or the fifth Sunday from Shrove Tuesday.

(5) In the Glossary to The Lancashire Dialect, 1775, Carlings are thus explained: Carlings — Peas boiled on Care Sunday are so called.” So in the popular old Scottish song, “Fy! Let us all to the Briddel”:

Ther’ll be all the lads and lasses
Set down in the midst of the ha,
With Sybows [onions] and Rifarts [radishes] and Carlings
That are both sodden and ra.

(6) In the Gentleman’s Magazine for 1785, p. 779, an Advertisement, or printed Paper, is copied, which mentions that ‘Careing Fair will be held on Friday before Careing Sunday’ and Mr. Nichols remarks on this passage, that he had heard an old Nottinghamshire couplet, in the following words:
Care Sunday, Care Away;
Palm Sunday, and Easter-Day.

(7) In Yorkshire, as a clergyman of that county informed me, the rustics go to the public-house of the village on this day, and spend each their Carling groat; i.e. that sum in drink, for the Carlings are provided for them gratis: and he added, that a popular notion prevails there that those who do not do this will be unsuccessful in their pursuits for the following year.

(9) The soft Beans are much to our purpose: why soft, but for the purpose of eating? Thus our Peas on this occasion are steeped in water….

Fabis Romani saepius in sacrificiis funeralibus operati sunt, nec est ea consuetudo abolita alicubi inter Christianos, ubi in Eleemosinam pro Mortuis Fabae distribuuntur. ‘The repast designed for the dead, consisting commonly of Beans, Lettuces, etc.’ In the Lemuria, which was observed the 9th of May, every other night for three times, to pacify the ghosts of the dead, the Romans threw Beans on the fire of the Altar, to drive them out of their houses.

Brand also points out the similarity of the word Care / Carr with the German Charwoche and CharFreytag, with the word ‘Char’ there meaning expiation for a sin: ‘satisfactio, muleta pro delicto’