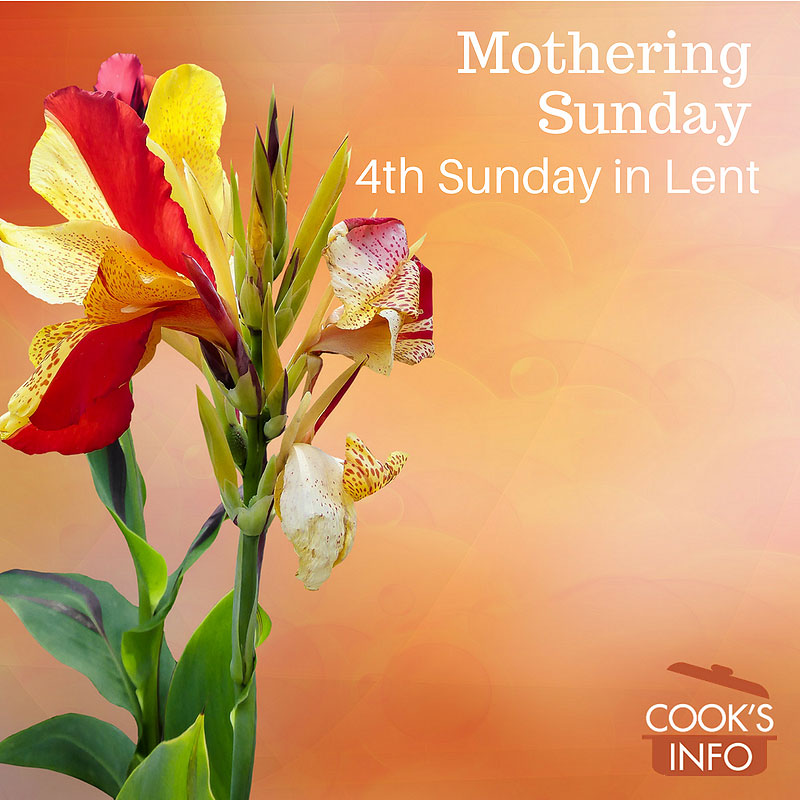 Mother’s Day in the UK has been celebrated on the fourth Sunday in Lent since at least the 1500s. For a long time, it had nothing to do with mothers.

Instead, it was the day when people who had moved away from parish churches that they had attended when they were young would return to visit those churches — their “Mother Churches”, if you will. This gave people a chance to reunite with their old friends and their family. They would often bring presents for their mother.

Later the tradition became more associated with actual mothers. People who were servants would even be given the day off to visit their Mums. Church services picked up the theme of giving thanks to and for mothers.

In Yorkshire, carlings were made on this day as well, instead of on the following Sunday (the fifth Sunday in Lent) as was the practice elsewhere in England, particularly in the north.

Today is also known as Lætare Sunday in the Church calendar.

In her 1883 book “Shropshire Folk-lore” Charlotte Sophia Bume recounts the practice of Mothering Sunday, and its association with veal, and simnel cakes:

“Half-way through Lent the fast is interrupted by the kindly home-festival of ‘Mothering Sunday.’ Whether this was suggested by the occurrence of the history of the Feeding of the Five Thousand, and the mention of ‘Jerusalem which is above, which is the mother of us all’, in the Church services for the day, or whether the Epistle and Gospel were chosen to suit the customs of the season, who shall say? But in very recent days, old-fashioned families might still be met with here and there, who observed the ‘pious’ custom of visiting their mother on Mothering Sunday. I could name one old lady in South Staffordshire, whose four sons yearly dined with her on that day up to within the last fifteen years, one of them making a railway journey of some length in order to do so: and I am told of a large family at Aston Boterel, under the Brown Clee hill, who kept up the same custom even more recently. Around Ludlow it appears to be generally observed in the humbler ranks of life. The Shrewsbury Journal of March 26th, 1879, says that ‘Sunday last being Mid-lent or what is generally called in some parts of Shropshire ‘Mothering Sunday’ a considerable number of lads and lasses observed the feast in Ludlow and its neighbourhood. A good sprinkling of young people came into the town, notwithstanding the biting north-east wind which was blowing during the whole day.’ It is further added, that the butchers’ shops at the end of the preceding week were stocked with an unusually large supply of veal, in preparation for ‘the veal and rice pudding the family dish always placed before the young folk according to tradition on Mothering Sunday’.

Whether from a reminiscence of the fatted calf killed to welcome the returning prodigal, or simply from the fact that veal is the meat specially in season at the time of year, a roasted loin of veal is the favourite piéce de résistance for the Mothering Sunday dinner of ‘bettermost’ families wherever the festival is observed and at Pulverbatch it was customarily supplemented by a dish of custard and ‘the last of the mincemeat’ which some people carefully keep till Easter Day. At Stottesden in South Shropshire, in the early years of the present century, the Mothering Sunday supper consisted of ‘fraises’ — thick pancakes, more solid than those of Shrove Tuesday, eaten with sweet sauce.

The very name of Mothering Sunday seems to have vanished from the popular mind in North Shropshire. In the South it is still retained, in places where the custom which gave rise to it is no longer generally observed. The famous ‘Shrewsbury Simnels’ have no doubt helped to keep it alive. These cakes are still made and displayed for sale by the confectioners of Shrewsbury every year in preparation for the family feast of Midlent and are eaten by many who do not heed the pious habit of mothering which they were intended to celebrate.” [1]Bume, Charlotte Sophia. Shropshire Folk-lore: A Sheaf of Gleanings. London: Trubner & Co. 1883. Pp. 323-324.