The type of field pea is the pea known botanically as “(Pisum sativum var. arvense” of which there were apparently several differently coloured cultivars such as black, grey, maple (dark brown) in different areas, with the maple one apparently being the predominant surviving cultivar today. [1]Balic, Adam. Grey, Black, Carling, Pigeon Peas and “Burning the Witch”. Citing food historian Laura Mason. Blog entry: The Art and Mystery of Food. 18 February 2007. Accessed July 2017 at http://adambalic.typepad.com/the_art_and_mystery_of_fo/2007/02/left_maple_peas.html

What all the cultivars have in common is that, like chickpeas, they hold their shape well when cooked. They have a nutty taste and are close to chickpeas in consistency.

The dried peas are soaked overnight in water, then simmered until soft, about 20 minutes, but not until they get mooshy or fall apart. The peas are then drained.

The peas are then cooked by frying butter, and seasoned with salt and pepper. Some people’s more modern versions add a bit of chopped bacon — though that of course may not have been the practice if Lent were being strictly observed.

They are served on a plate as part of a meal, or as a snack in a greaseproof paper and newspaper cone. You can garnish them with more salt and pepper, along with bread and butter, and vinegar, or, a dash of rum and sometimes some sugar in some areas such as Northumberland. (An acid such as vinegar or lemon juice is an old trick for making bean dishes come alive.) In Lancashire, they are sold from food waggons, which call them “parched peas.” 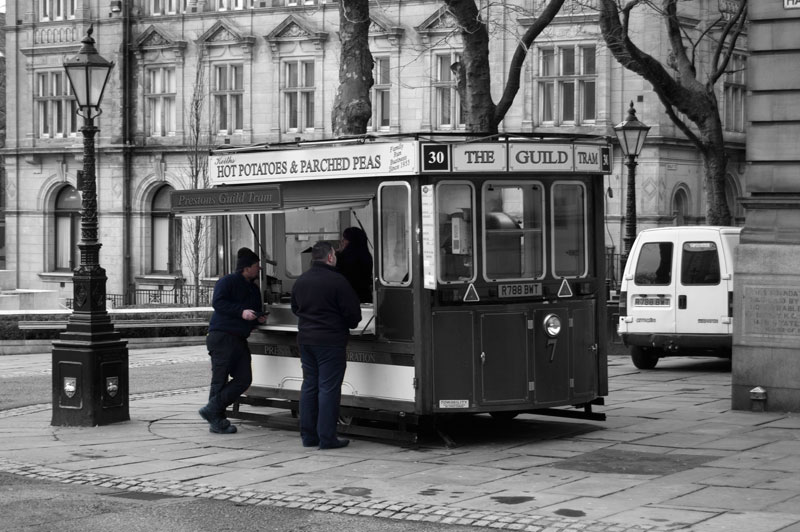 In some traditions, the cooked peas are formed into fritters for frying. If so, often breadcrumb, onion and herb added as binding and seasoning. Then beef dripping or butter is melted in a frying pan. When the fat is hot, dollops of the beans are fried for 2 to 3 minutes to heat them. The dollops spread out and form small pancakes.

Because these fritters were traditional to make particularly on Carle Sunday, they got called “Carlings” or “Carlins.”

Some called the peas used “carling peas” or “carlin peas”.

“So what’s special about carlins? Well, they’re peas, but not as we know them. They’re maple peas, an old variety of field pea with a nutty flavour and a texture like chickpeas. To make carlins, the dried peas are soaked overnight, rinsed, boiled, then fried in butter and seasoned with pepper. This basic recipe was tweaked by adding chopped bacon, onions, and vinegar or a dash of rum.” [2]Elvidge, Heather. Turning Year: A special meal for Passion Sunday. Scarborough, Yorkshire: The Scarborough News. 13 March 2016. Accessed July 2017 at http://www.thescarboroughnews.co.uk/news/turning-year-a-special-meal-for-passion-sunday-1-7785773

“….classic dark brown Carlin Pea, also know as Black or Grey Peas and popularly served as Parched Peas in Lancashire, simply boiled up and eaten with vinegar and salt. With their firm texture and delicious nutty flavour, Carlin Peas make an excellent British substitute for chickpeas.” [3]Accessed July 2017 at https://hodmedods.co.uk/collections/peas/products/black-badger-carlin-peas

If there are stray peas in the pan at the end of cooking, whomever you give the last stray pea to will be the first to marry.

“Ling” can be a diminutive suffix in English. The creation of the word “carling” from “care” or “carle” is the same as that from darling (from “dear”), fairling (a small gift bought for someone at a fair), foundling, hireling, underling, princeling, duckling, etc.

This web site generates income from affiliated links and ads at no cost to you to fund continued research · Information on this site is Copyright © 2022· Feel free to cite correctly, but copying whole pages for your website is content theft and will be DCMA'd.
Tagged With: English Food, Fritters & Pancakes