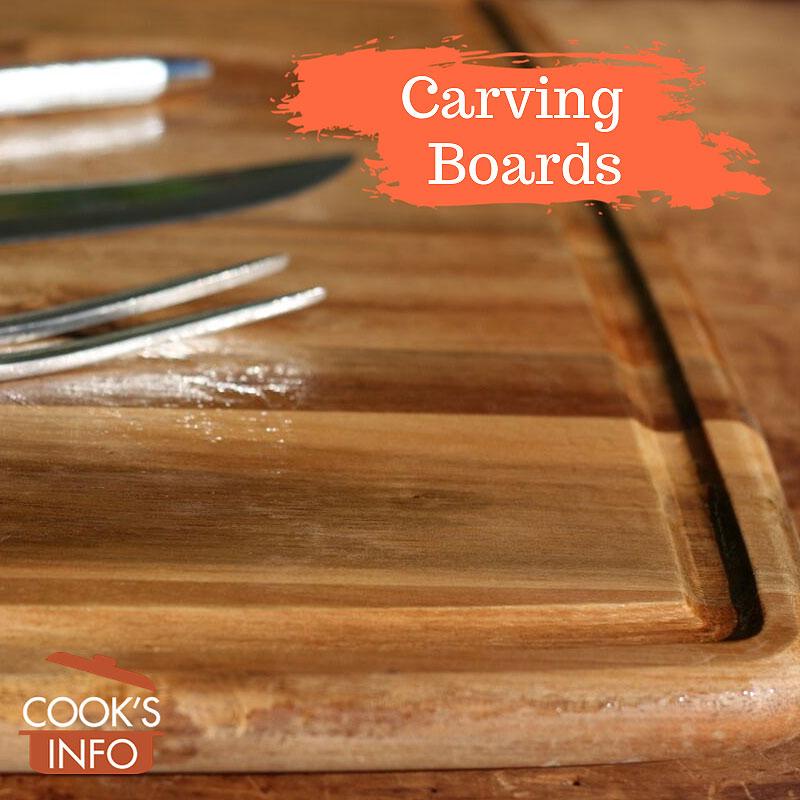 A carving board is a board that is used both to slice meat on and serve the sliced meat from at the dining table or a sideboard. It will have grooves to catch juices running off the meat. Owing to the presentation aspect, it will also generally have a nicer appearance than other forms of cutting boards.

Carving boards are typically made of wood, but you can also get plastic ones. You can refresh the colour of wooden ones with mineral oil.

A carving board will always have a wide, deep groove around its edges to catch juices flowing off meat as it is being carved. Some also have grooves throughout the board. Sometimes in addition to these grooves there is a depression (often referred to colloquially as a “moat” or a “well”) in the centre or at the front of the board. It will be deeper that any of the grooves, which will run into it to channel the juices thus preventing overflow off the board. Some have a slight slope towards the well to assist the flow. These wells can be oval, round, square or rectangular.

Other cutting board features

Some carving boards have handholds carved in the side to help you get a firm grip when lifting, as they can be quite heavy when loaded up with a large bird or joint of meat.

Other carving boards have spikes in varying configurations coming out of them to help hold the meat in place while it is being carved. A common configuration is spikes on a ring that fits into a carved-out ring on the board. To store without the spikes sticking out, you invert the ring so that the spikes fit into specially drilled holes in the board.

Usually the reverse side is flat, so it could potentially be used for cutting should you choose, but some carving boards have feet, which would prevent this. The top of the board could in theory be used as an everyday cutting board, though some grooves may be so prominent and deep as to get in the way of chopping up certain items and make clean-up more difficult, and the presentation appearance would certainly be impacted by everyday use.

Use a cutting board large enough for the joint or meat being carved to allow room for a few advance slices to be placed on the side. If there is no room make sure to have a serving plate nearby.

Before taking your loaded carving board to the table, in the kitchen, remove as many skewers and as much string as you can from the meat, if present, without causing the meat or bird to fall apart.

Meat (excluding steaks and chops) should be allowed to rest on a carving board for 20 minutes to allow the juices to be drawn back into the meat. Cover with tin foil (or a serving dome, if you’re lucky enough to have one.)

You can now stand while you are carving. At one time, it was considered bad form to stand up while carving. But for most people, it’s easier.

You can use a cutting board, but beware of juice running off.

This web site generates income from affiliated links and ads at no cost to you to fund continued research · Information on this site is Copyright © 2023· Feel free to cite correctly, but copying whole pages for your website is content theft and will be DCMA'd.
Tagged With: Meat Cooking Tools, Roasting Meat, Roasts, Sunday Roast, Treen