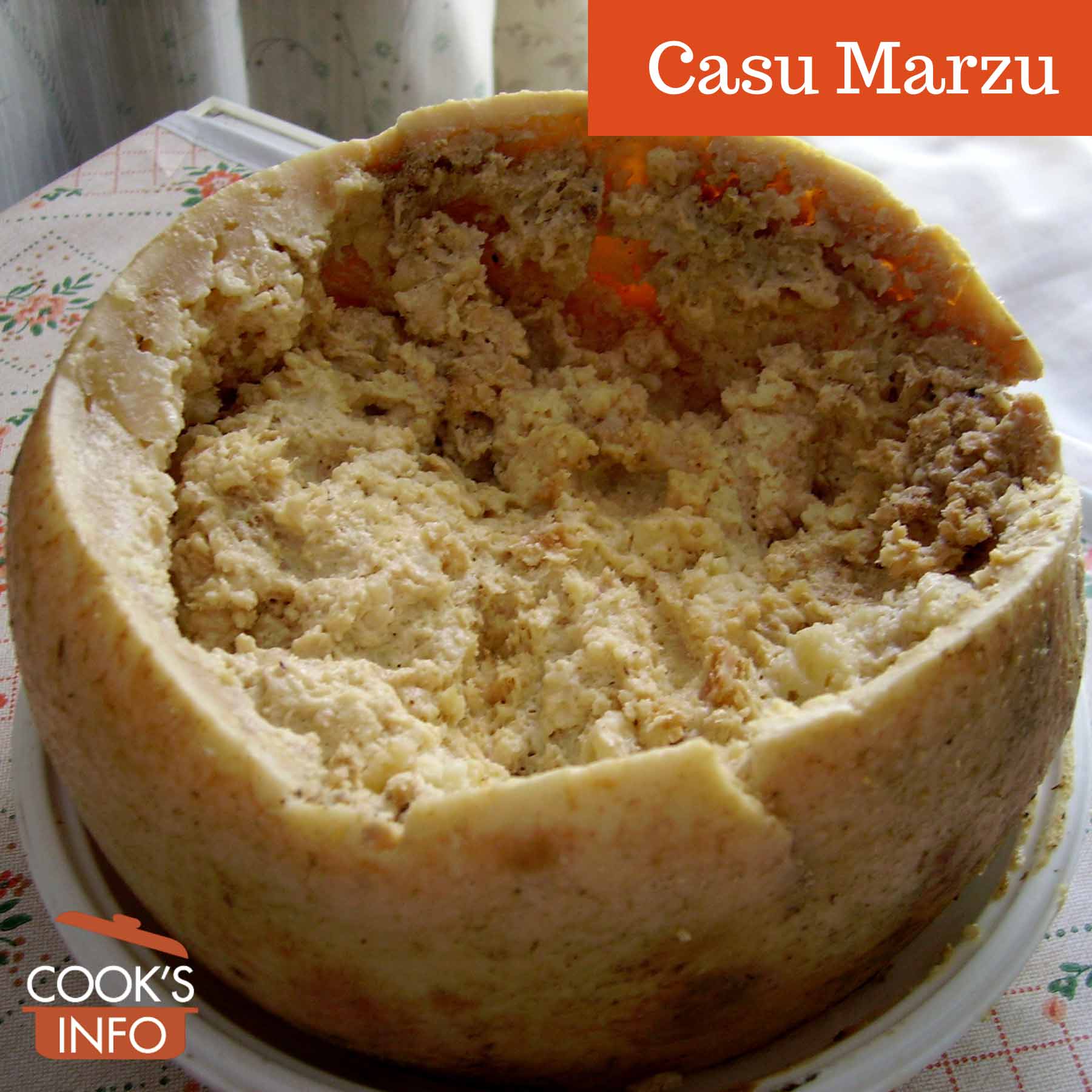 Casu Marzu is a cheese made in Sardinia, Italy.

To make, you start with pieces of Pecorino Sardo cheese. You set the cheese out in the open, uncovered, and allow cheese flies (scientific name “Piophila casei”) to lay eggs in the cheese.

The eggs hatch into transparent white maggots about 8 mm (⅓ inch) long. Sometimes, instead of waiting for the flies to lay eggs, already-formed maggots are introduced into the cheese to speed the process along.

A piece of the pecorino cheese can be populated by thousands of maggots. As the maggots feed on the cheese, they cause the cheese to ferment and the fats in it to decompose. The cheese becomes very soft, with liquid weeping out of it. The drops of liquid are called “lagrima“, meaning “tears.”

The finished cheese has a very strong, pungent burning taste. It is generally served with the Sardinian bread called “pane carasau” and red wine.

Casu Marzu is seen as a manly thing to eat. Most women tend to avoid it.

People consuming it reputedly run the risk of the larvae, which can remain unaffected by stomach acids, taking up residency in the intestines and boring through their flesh. It cannot legally be sold in Italy, but it is sold on the black market in Sardinia. At markets in Sardinia, it is often kept under the table for trusted customers.

It is served at special occasions such as weddings, birthdays and bachelor parties. The ban on Casu Marzu for some has given the eating experience an extra edge.

“Casu marzu” in Sardinian means “rotten cheese.” As there is no formal spelling or vocabulary for Sardinian dialect, you may also see it spelled “casu modde”, “casu cundhídu”, or “hasu muthidu.”

This web site generates income from affiliated links and ads at no cost to you to fund continued research · Information on this site is Copyright © 2023· Feel free to cite correctly, but copying whole pages for your website is content theft and will be DCMA'd.
Tagged With: Italian Cheeses, Sardinian Food