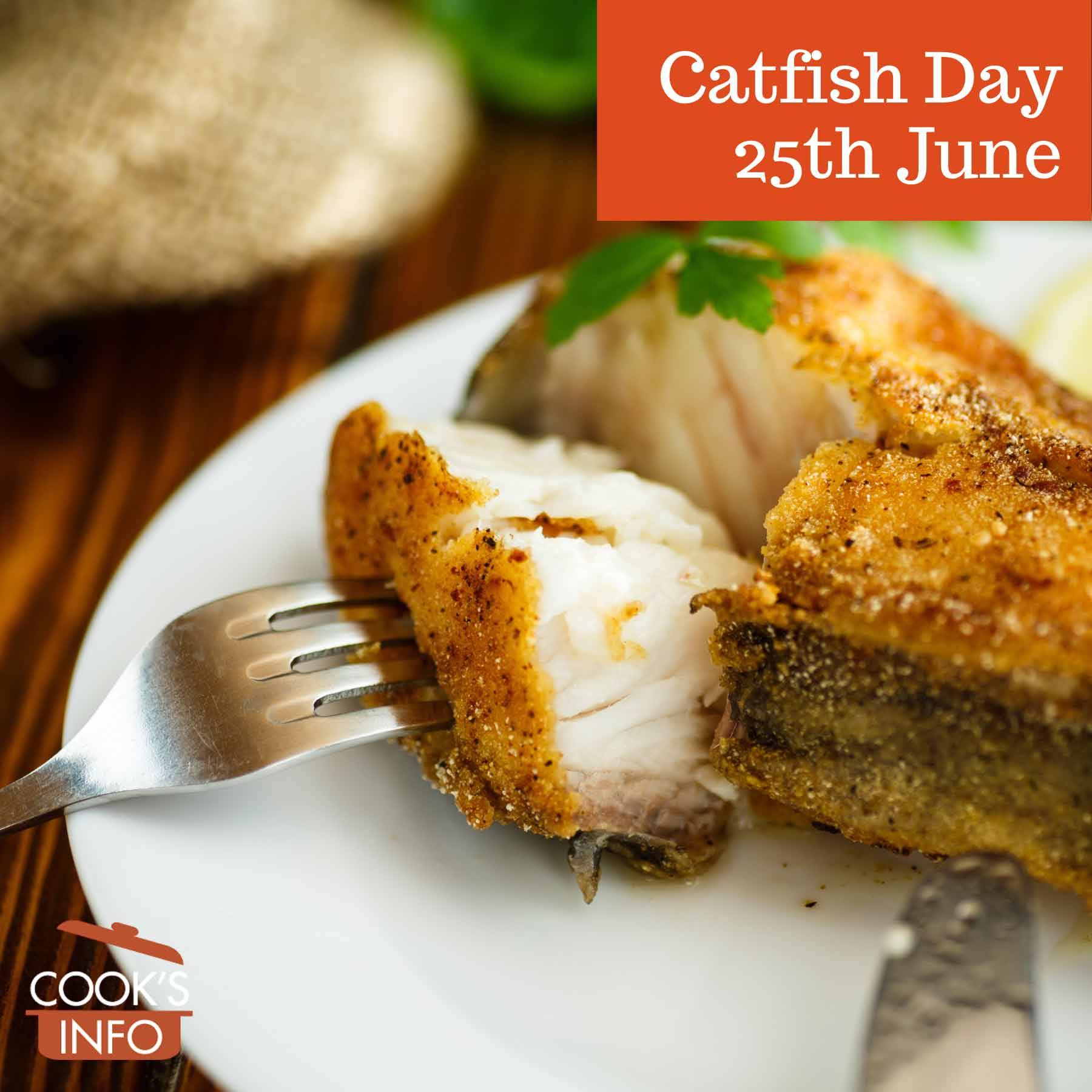 The 25th of June is Catfish Day.

Specifically, the day is supposed to be about farm-raised catfish, which is environmentally sustainable “The National Audubon Society, Monterey Bay Aquarium, and Environmental Defense all recommend U.S. Farm-Raised Catfish as a safe environmental choice” [1] FAQS. Accessed May 2021 at https://www.uscatfish.com/faqs and has a clean, mild taste.

The catfish farming business in the United States is largely in four states: “Ninety-four percent of all U.S. Farm-Raised Catfish is raised in Alabama, Arkansas, Louisiana and Mississippi.” [2] FAQS. Accessed May 2021 at https://www.uscatfish.com/faqs

It is often traditionally coated in cornmeal and fried. It can be easier to debone after it has been cooked whole.

Many people who don’t like fish find that they like farmed catfish, because it doesn’t have a fishy taste.

Des Allemands, Louisiana calls itself the “Catfish Capital of the Universe.” Each summer since 1975 (the exact date seems to vary) the town has held the 3-day ‘Louisiana Catfish Festival’.

While it’s important to bear in mind that, officially, those types of proclamations only apply to that day in that year, and not subsequent years, at least this food day has some basis in reality, unlike many others.

Ninety-nine percent of all these catfish were farm-raised. Between 1975 and 1985, production of farm-raised catfish increased by 1200 percent. Most observers expect that production will continue to increase in 1987. Production costs of catfish farming, which have averaged only 65 cents per pound over the past 8 years, have resulted in a stable income for growers and an economical food product for consumers. The accompanying growth of the catfish processing industry also has created thousands of permanent jobs.

Farm-raised catfish have come a long way from their bottom-feeding ancestors. The catfish that are available today, fresh or frozen in markets nationwide, are products of state-of-the-art methods of aquaculture. They thrive in clean freshwater ponds on many American farms, where they are surface-fed soybean meal, corn, fish meal, vitamins, and minerals. Farm-raised catfish not only furnish American consumers with a tasty delicacy but also provide a nutritious, low-calorie source of protein that is also low in cholesterol.

In recognition of the value of farm-raised catfish, the Congress, by House Joint Resolution 178, has designated June 25, 1987, as “National Catfish Day” and authorized and requested the President to issue a proclamation in its observance.

In Witness Whereof, I have hereunto set my hand this twenty-fifth day of June, in the year of our Lord nineteen hundred and eighty-seven, and of the Independence of the United States of America the two hundred and eleventh.

Arnold, Jon. Where to find the best catfish in Mesquite for National Catfish Day. Dallas, Texas: The Dallas Morning News. 25 June 2020. Accessed May 2021 at https://www.dallasnews.com/food/2020/06/25/where-to-find-the-best-catfish-in-mesquite-for-national-catfish-day/

Ode to the catfish: A key part of Nashville’s cuisine and culture. Nashville, Tennessee. 24 June 2018. Accessed May 2021 at https://www.tennessean.com/story/entertainment/2018/06/24/nashville-predators-catfish-tradition-catfish-day-june-25-biggest-catfish-record/706888002/

This web site generates income from affiliated links and ads at no cost to you to fund continued research · Information on this site is Copyright © 2023· Feel free to cite correctly, but copying whole pages for your website is content theft and will be DCMA'd.
Tagged With: Fish