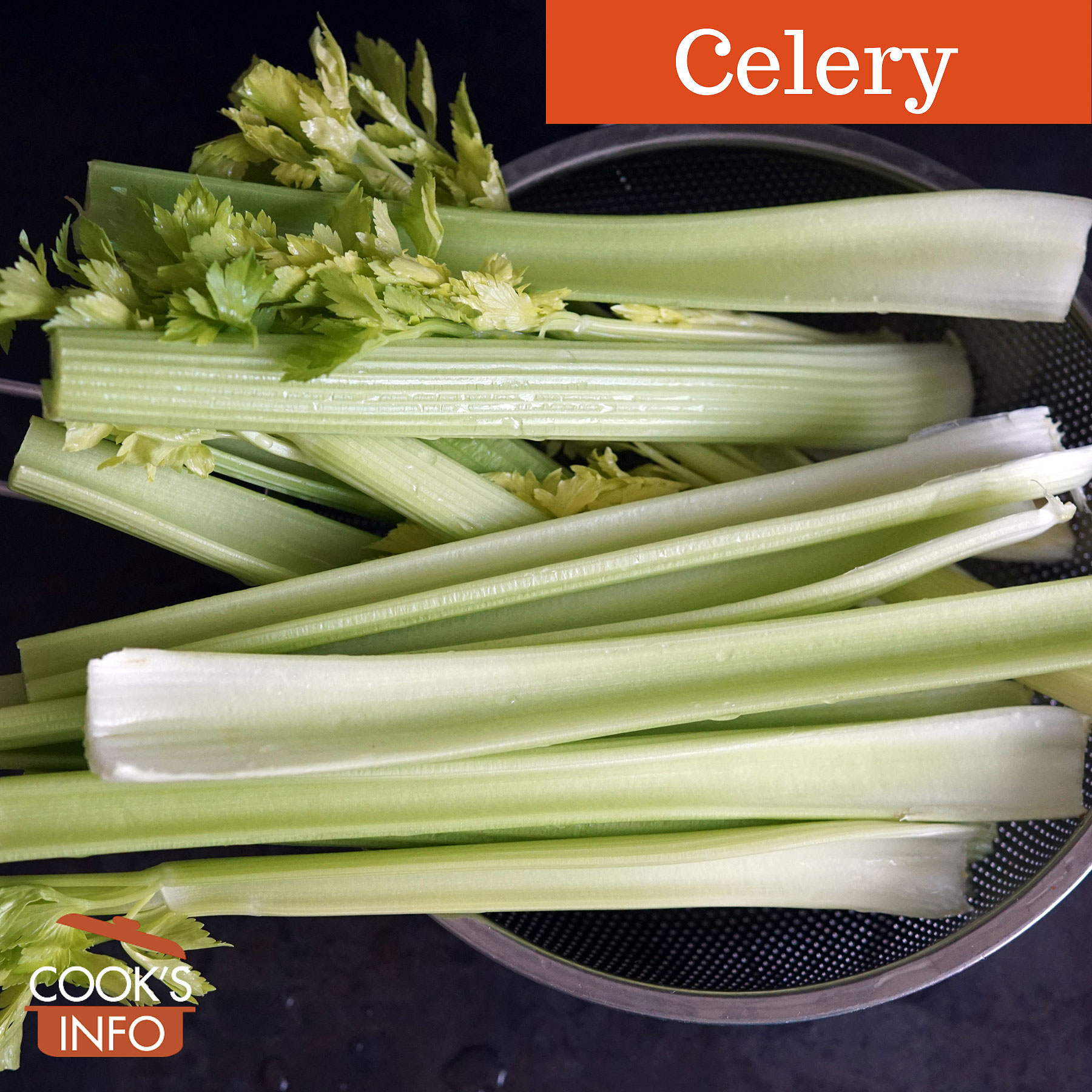 Celery is a green vegetable grown for its stalks and leaves. Its most popular use is to impart its flavour to a dish.

Celery can also be eaten on its own, raw, but its wonder comes from its use as a flavouring ingredient, giving depth and aroma to stews, soups and sauces. Consider keeping chopped celery in your freezer as a staple to toss into dishes for instant flavour.

There are actually several different varieties of celery, which range from light to dark green. There’s even a red variety, called Violet de Tours (this is probably best used fresh in salads, because it promptly turns green if cooked.)

When buying celery, you want stems that look crisp and leaves that look fresh; the whole bunch should still stand rigidly together.

You will see the individual stalks of celery referred to either as “stalks” or “ribs.”

Break off the stalks that you need, and wash them under cold running water, using your fingers to rub off any clinging soil. Chop and use as needed.

If you aren’t planning to use the leaves right away, chop them up and freeze them, so that you will have them on hand to toss into soups and sauces.

If your celery has wilted a bit, you can revive it by soaking celery pieces in ice water for an hour.

It has generally been accepted that celery is not what you would necessarily call a nutritional powerhouse. It is a myth that you use more calories to chew it than it has. It is, however, very high in fibre.

It also contains apigenin, which may help in converting cancer cells into normal cells that die as scheduled. [1]The compound in the Mediterranean diet that makes cancer cells ‘mortal’. Pam Frost Gorder, Ohio State University Press Office. Retrieved May 2013 from http://www.eurekalert.org/pub_releases/2013-05/osu-tci052013.php

Some people can be allergic to celery:

“Allergy to celery tuber (celeriac), a member of the Apiaceae family, belongs to the most frequent pollen-related food allergies in some European countries such as Switzerland, France, or Germany. Celery is consumed as raw or cooked vegetable. Severe allergic reactions to celery are mainly observed after ingestion of raw celery but can also occur after intake of foods containing technologically processed or heated celery roots. This is particularly important since dried powder from celery roots is used as a cheap spicing ingredient in many processed foods such as spice mixtures, soups, broths and salad dressings. The allergenicity of celery spice has been shown for patients with known allergy to raw celery in our recent food challenge studies. Thus, commercially used celery powder is not safe for patients who are allergic to raw celery. Furthermore, the allergenic potential of celery was sustained for some patients even after extensive thermal treatment (>60min, at a temperature of 100°C), suggesting a high heat resistance of some of the celery allergens.” [2]University of Manchester. Faculty of Biology, Medicine and Health. Allergy information for: Celery, Celeriac (Apium graveolens). Accessed September 2020 at http://research.bmh.manchester.ac.uk/informall/allergenic-food/index.aspx?FoodId=18#:~:text=Allergy%20to%20celery%20is%20associated,as%20anaphylaxis%20have%20been%20reported.

If celery is present as an ingredient in an item produced in the EU, it must be specifically declared as an allergen on the package labelling. [3]EU Food Information Regulation No. 1169/2011, passed on 13th December 2014. 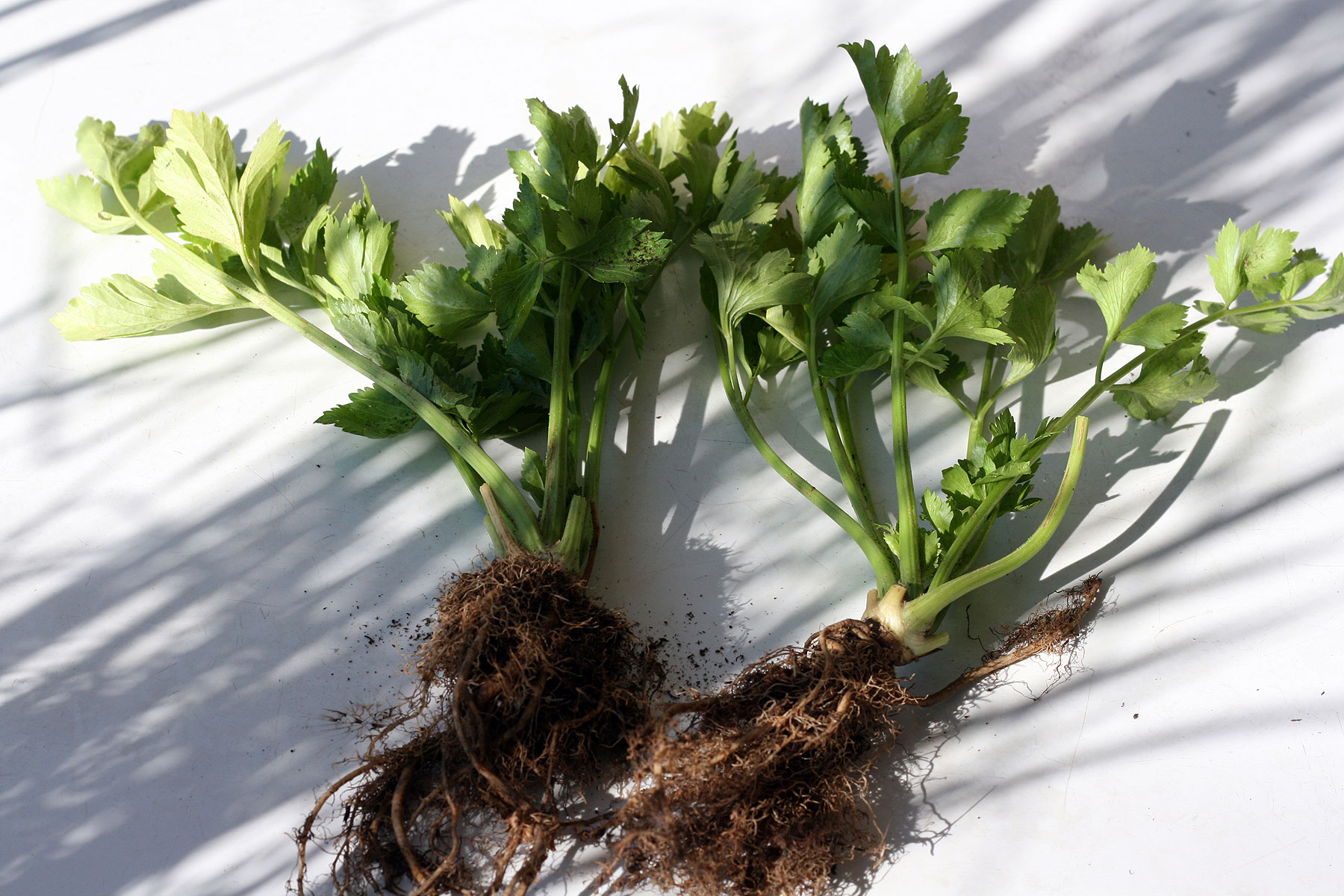 To store celery in refrigerator for up to a week, either chop into pieces and keep in a tub of water, changing the water every few days, or wrap it in paper towel and place in plastic bag (the plastic bag keeps moisture in; the paper towel absorbs excess moisture.)

Celery cannot be home canned plain. It canned be water-bathed, as it is low-acid, and it can’t be pressure canned, as there are no lab-validated processing times from reputable sources. It can, however, be used in tested, modern recipes that call for it in tracklements such as relishes, chutneys, pickles, etc.

Dehydrating celery and freezing it are good longer-term storage options for celery.

Celery does not need to be blanched before freezing. Chop it thinly, either by hand or in a food processor. To prevent solid bunches in the bags, spread the slices out on plates or a cookie sheet, freeze for a few hours, break up the forming masses with your fingers, and then pack and freeze. (Don’t leave it sitting in the freezer on the cookie sheet for a few days or it will just all dry out.) You can only use frozen celery for cooking. Frozen this way, it should be used up within a month or two, or it will start to brown in the freezer. For longer storage, blanch first in boiling water for 1 ½ minutes.

To the Greeks, celery was a holy plant. Celery leaves were awarded to winners of the Nemean games (held every second year in the southern city of Nemea, starting in 573 BC). When they did use it in cooking, they used it as a flavouring agent. The Romans ate celery, even using it in desserts, but something of the old holy superstition must have hung about as they suspected that at times it could bring bad luck.

The first recorded use of cultivated celery as a food is in France in 1623. For the next hundred years, it was used to add flavour to other food. By the middle of the 1600s, the French and Italians were eating it with a salad dressing.

The breed continued to improve through the 1600s and 1700s. The flavour was very strong; breeds were developed that had milder flavours so that the stalks could be eaten in their own right.

Earth used to be mounded up around celery to blanch the stalks. Self-blanching varieties are now grown.

Our word “celery” comes from the French “celeri.” The classical Greek writer Homer mentions something called “selinon” in his Odyssey, which many assume to be celery, but you can’t make that assumption because it can also be translated as “parsley” or even just “herbage”:

“And all around soft meadows bloomed of violets and parsley (selinon), yea, even a deathless god who came thither might wonder at the sight and be glad at heart.” — Homer 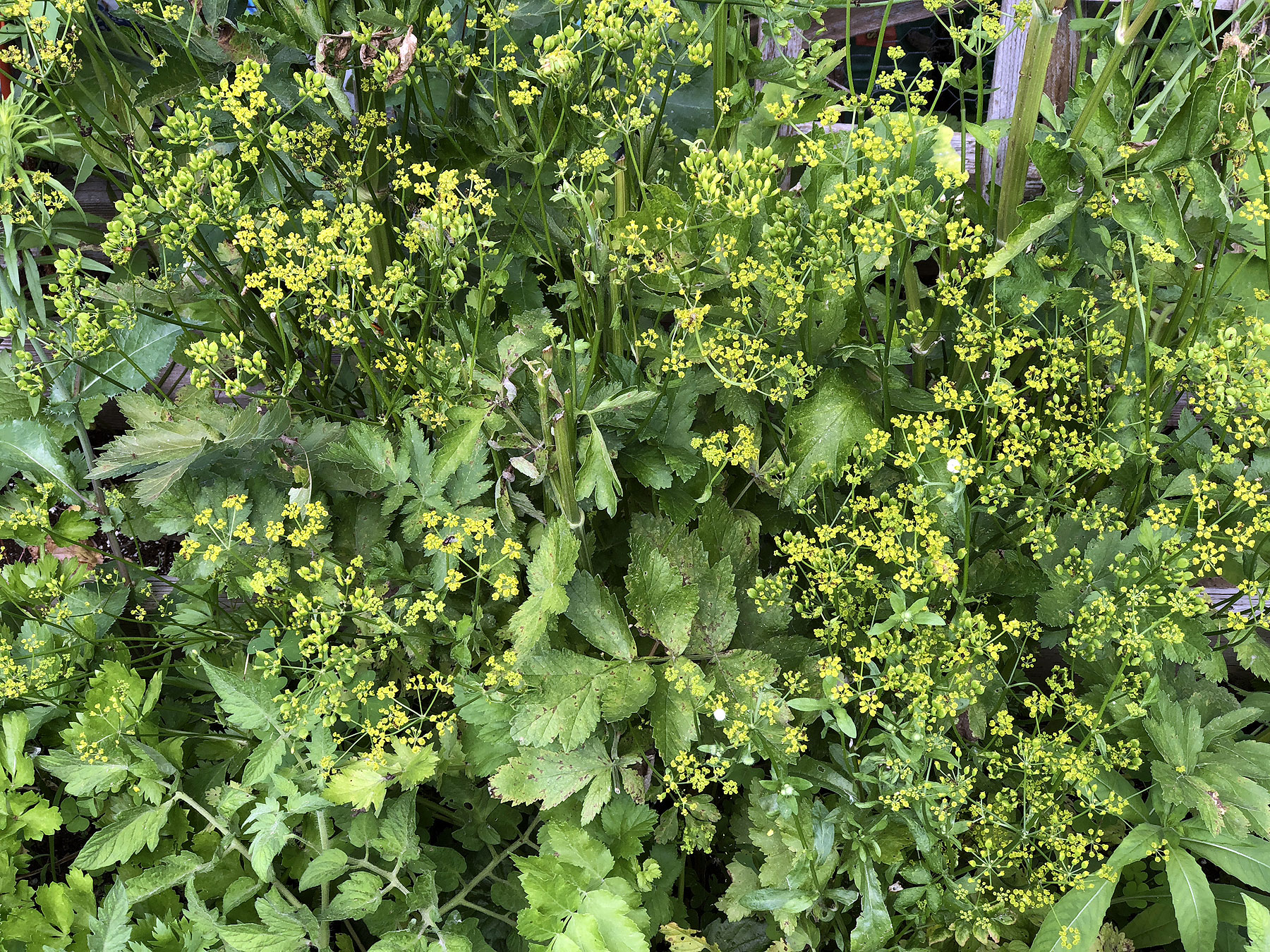