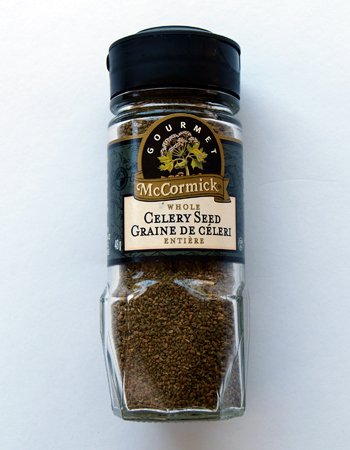 Celery seed doesn’t actually come from the same celery plant that we eat.

The seeds are taken from smallage. Smallage produces white flowers in its second year, and then seeds. One acre of plants will produce around 500 pounds (225 kg.) Reputedly, it takes 760,000 seeds to weigh 1 pound (450 g.)

Very little seed is produced in North America; most is imported from Asia.

Celery seeds are brown and very small in size. They have a powerful celery flavour with a tinge of bitterness, so use sparingly.

Celery seed is used in a lot of pickling mixes.

Instead of buying and using celery seed or salt, consider the tip on frozen celery in the main entry for celery. Or, try lovage seed (though that’s pretty much impossible to get hold of these days, unless you grow it yourself.)

The seed was used as a medicine by the Egyptians, Greeks and Romans. It wasn’t used for any cooking purposes until the 1600s.

This web site generates income from affiliated links and ads at no cost to you to fund continued research · Information on this site is Copyright © 2023· Feel free to cite correctly, but copying whole pages for your website is content theft and will be DCMA'd.
Tagged With: Ancient Egypt, Ancient Greece, Roman Food