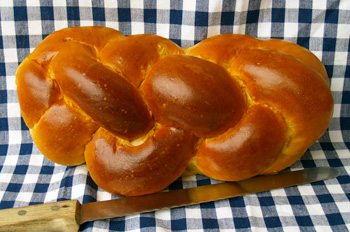 Challah is a Jewish yeast-risen wheat bread. It is traditional on the Jewish sabbath.

Challah is a rich bread, but not as rich as brioche, even though there is no dairy (butter or milk) to keep it parve, nor any eggs either, though it might be brushed with egg before baking. It is made from just yeast, flour, salt, sugar, and water.

It can be heavy and crusty.

The dough is divided into three strands, and braided, then brushed with a wash of egg yolk (sometimes mixed with a little water), or egg white, then sprinkled with poppy or sesame seeds before baking. You put the three strands of dough beside each other, squish them together at one end of them, then start overlapping them to make the braiding. Three strands are traditional but ambitious people can do more strands.

It can also be made as braided rolls called “bilkele” or “bulkel.”

The bread can be baked free-form, or in oiled pans. 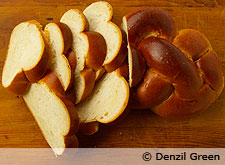 At Rosh Hashana, raisins might be mixed into the dough and the bread formed in a circle, representing a crown, being brushed with honey.

At the first Sabbath after Passover, it might be baked with the impression of a key on top of it, or a key made from a piece of dough. This is called Schlissel challah, with Schlissel meaning “key.” It symbolises hopes that the door to a good livelihood will be open.

Bshis is a challah “water challah”

Challah is very good when used for French toast. It is good with beef sandwiches, particularly corned beef.

Modern versions of Challah might use honey or molasses as the sweetener, and whole wheat flour. There are also bread machine recipes — you make the dough in the bread machine, then take out and braid. 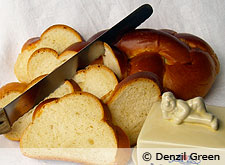 Challah is usually made two loaves at a time for the Sabbath. A blessing is said at the table over the bread, “Blessed are you, Lord our God, king of the universe, who brings forth bread from the earth.”) It is covered with a cloth until the blessing is said.

During the making of the bread, there’s a ritual, called “hafrashat challah,” in which you set aside a small piece of the dough for the priests. You say this blessing over the dough: “Blessed are You, Lord our G-d, King of the Universe, Who has sanctified us with His commandments and commanded us to separate Challah.” Then you take a piece of dough off about the size of an olive, and say “this is challah.” However, since the Temple was destroyed by the Romans, there are no more Jewish priests, so the piece of dough is discarded. You wrap the piece in foil, put it in the oven, and let it burn then discard, or put in a small bag and toss in the trash bin. Back when people had hearths, it would be tossed into the fire.

It is really only considered necessary to do this when you are making quantities of challah that involve more than 12 ½ cups (3 pounds, 12 oz / 1.7 kg) of flour.

It is actually that discarded piece of dough that is called “challah”, but the word is now applied to the whole loaf.

If you forgot, you can say the blessing over the baked loves, and cut off a slice.

Most boxes of Matzo will say on the side of them “Challah taken.”

This web site generates income from affiliated links and ads at no cost to you to fund continued research · Information on this site is Copyright © 2022· Feel free to cite correctly, but copying whole pages for your website is content theft and will be DCMA'd.
Tagged With: Jewish Food, Yeast Breads