×
You are here: Home / Archives for Yeast Breads

Boston Brown Bread is a yeast-risen, very moist brown bread made with molasses that is traditionally steamed in cylindrical 13 oz (400 ml) volume metal coffee cans, to make loaves of bread that yield round slices of bread. It is usually served warm. Traditionally, it is made from wheat flour mixed with rye flour and…

END_OF_DOCUMENT_TOKEN_TO_BE_REPLACED 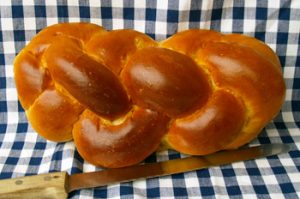 Challah is a Jewish yeast-risen wheat bread. It is traditional on the Jewish sabbath. Challah is a rich bread, but not as rich as brioche, even though there is no dairy (butter or milk) to keep it parve, nor any eggs either, though it might be brushed with egg before baking. It is made from…

END_OF_DOCUMENT_TOKEN_TO_BE_REPLACED

Damper Dogs are stove-top baked bread made from white bread dough made in Newfoundland. Traditionally, they were made on top of a cast-iron wood or coal stove, on the flat dampers that served as burners for the stove. You’d clean the top of the stove, then heat it. Meanwhile, you would cut off egg-size pieces…

END_OF_DOCUMENT_TOKEN_TO_BE_REPLACED 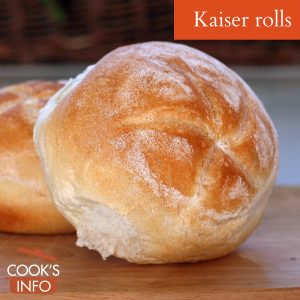 Kaiser rolls are yeast-risen bread rolls, typically made of white wheat flour. They are large and round, crisp on the outside, and soft on the inside, They have a five-point pinwheel design on top, which is meant to represent a crown. The pinwheel design exposes lots of surface to get crispy during baking. Sometimes their…

END_OF_DOCUMENT_TOKEN_TO_BE_REPLACED

Kalach is a yeast-risen bread made throughout Eastern Europe. There are many variants of Kalach Bread. Russia In Russia, it is a loaf made of white flour formed into the shape of a ring. The word Kalach came to mean any kind of white bread in Russian. In Arkhangelsk, on the White Sea, bakers boiled…

END_OF_DOCUMENT_TOKEN_TO_BE_REPLACED 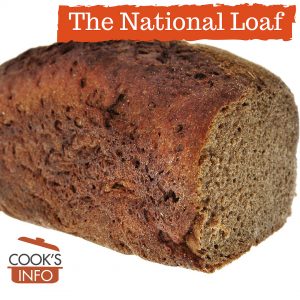 The National Loaf was a loaf of bread sold in the UK during World War Two. It was based on a form of whole-grain bread in order to make wheat imports go further.

Pain d’habitant is plain, white homemade bread made in Québec, Canada. Baked in bread pans, the dough is proofed as two rounds of dough in each pan, that rise to join together and form one loaf with an indent in the middle. Traditionally, Pain d’habitant is baked in brick or stone ovens outside the house,…

END_OF_DOCUMENT_TOKEN_TO_BE_REPLACED 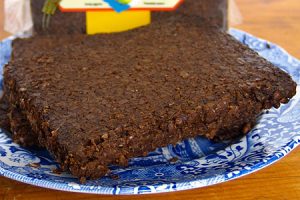 Pumpernickel is a bread that is traditional in the Westphalia region of Germany. Pumpernickel is very dark brown, almost black at times, with a heavy, coarse, dense texture and almost no crust. The taste is slightly sweet and slightly sour. There are no caraway seeds, as there are in the America version. It is made…

END_OF_DOCUMENT_TOKEN_TO_BE_REPLACED

Quignon usually refers to the heel end of a loaf of crusty bread, such as a baguette, particularly when torn off. Sometimes people use the word “Quignon” to refer to a thick wedge of bread from any part of the loaf, whether cut or torn off.