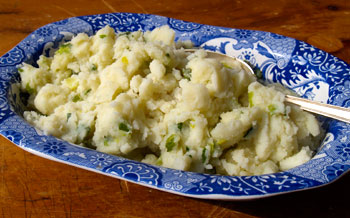 While the peeled potatoes are boiling, some greens or onions are simmered in milk. The potatoes are mashed, then the hot milk and veg mixture is stirred in.

It’s served in hot mounds on plates with a well on top in which you put butter that melts into a pool of butter sauce, into which you dip forkfuls of the mashed potato.

This dish is very similar to Colcannon.

“Champ” is an older English word that has largely fallen out of usage in its meaning of “chew, chomp.”