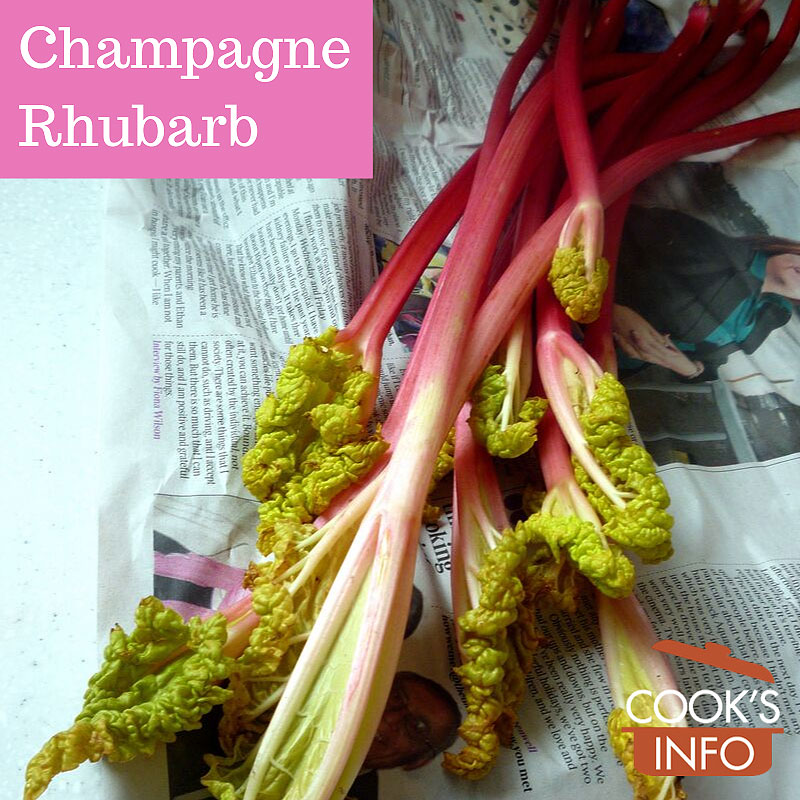 Champagne rhubarb is rhubarb grown by a special technique.

The rhubarb is “forced” to grow very early in the season, in “forcing sheds.” Though it is still winter outside at the time, the sheds provide warmth to cause the rhubarb to grow earlier than it would outside. Restricted light in the sheds causes the stalks to be less tart, less fibrous, lighter in colour (a very pale pink), and more delicate overall — hence the name “champagne.”

In Wakefield, Yorkshire, England, producing champagne rhubarb has become an industry. The rhubarb is started outside in the cold, then moved into long, low, “forcing-sheds” sheds. The warmer sheds fool the Rhubarb into thinking that spring has arrived, so that the stalks will begin to grow in earnest. The rhubarb is grown in near darkness, traditionally by candlelight, and is even harvested by candlelight to avoid any encouragement of photosynthesis.

As of 2010, there were 12 commercial growers of the product in Yorkshire, mostly located in a triangle between Morley, Wakefield and Rothwell. [1]Easton, Mark. Map of the Week: The Rhubarb Triangle. BBC News. 25 February 2010.

In England, champagne rhubarb first comes on the market at the end of December and is available until around the end of March.

On 25 February 2010, champagne rhubarb grown in Yorkshire was awarded European PDO status, under the product name of “Yorkshire Forced Rhubarb.”

The rootstalk used is specially prepared two years in advance so that enough energy is stored up in it for the forcing.

Forced rhubarb is also grown in Holland, with somewhat different techniques from those used in Yorkshire.

There is also an actual variety of rhubarb called Champagne “Rhubarb” that gardeners can buy. It is ready to harvest early, has green stalks when it is ready, and tastes surprisingly like gooseberries.

When buying champagne rhubarb / forced rhubarb, choose thin, pale pink stalks with no bruising or green shading on them at all. They may have small, yellow leaves on them trying to sprout.

Champagne rhubarb needs only very light cooking, but because it is still quite tart, always needs a healthy dose of sweetening for most uses. As with all rhubarb, discard the leaves.

If you have your rhubarb in your garden, you can try it. Just as the rhubarb starts to poke its head above the ground, you cover it with something tall — an upside down bucket, a terra-cotta chimney pot, old bin, etc, and allow just a bit of light to get in. Shading the plant stalks from the light stops stalks from becoming tart, and also for some reason causes them to be ready earlier.

The first known discovery of forced rhubarb appears to have been in Chelsea, London, in 1815, in the Chelsea Physic Gardens by a man named William Anderson [3]”It wasn’t until a chance discovery in 1815 by William Anderson while working at the Chelsea Physic Garden that the blanched stems became important.” — Chelsea Physic Garden. Points of Interest March 2008. London: Chelsea Physic Garden. 2008. Page 1. . Anderson (1766 – 1846) was a curator at the gardens from 1815 to 46. [4]History of Chelsea Physic Garden Staff. London: Chelsea Physic Garden. Retrieved March 2010 from http://www.chelseaphysicgarden.co.uk/aboutus/former.html [Ed: note that the date of 1817 for this discovery is often incorrectly cited by food writers.] A trench being dug accidentally heaped up some soil on top of rhubarb beds, causing the rhubarb that forced its way up through the heap of dirt to grow blanched, with better flavour. Anderson reported his findings to the Royal Horticultural Society in 1816. Within a year or two gardeners began experimenting with forcing rhubarb under extra tall, inverted flower pots with manure heaped around the outside. [5]Rhubarb Pot Horticulture Ware, Page 6. In: A Place to Take Root: A History of Flower Pots and Garden Containers in North America. Exhibition 15 October to 15 December 2005. Botanic Garden of Smith College. Retrieved March 2010 from http://www.smith.edu/garden/exhibits/flowerpots/potpage6.html

By the late 1800s, there were over 200 producers in the Yorkshire area. [8]Application to Register: Yorkshire Forced Rhubarb. PDO. No 510/2006. Retrieved 2010 from: http://www.defra.gov.uk/ After the Second World War, with the advent of year-round fresh fruit, demand for early-spring rhubarb decreased. This, combined with a perception of rhubarb as “old-fashioned”, caused the number of producers in Yorkshire to slowly decline until only 12 remained in 2010. [9]Easton, Mark. Map of the Week: The Rhubarb Triangle. BBC News. 25 February 2010.

Jack, Ian. In a few sheds near Wakefield, you can hear the rhubarb grow. Manchester: The Guardian. 19 January 2008.

This web site generates income from affiliated links and ads at no cost to you to fund continued research · Information on this site is Copyright © 2022· Feel free to cite correctly, but copying whole pages for your website is content theft and will be DCMA'd.
Tagged With: Blanch, Etiolation, Rhubarb