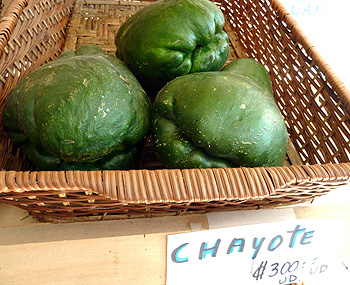 Chayote are sold as “Chayote Squash”, though they are not really a squash — they’re gourds that are treated as Summer Squash in cooking.

They grow on a vine that can grow up to 30 feet long (9 metres.) The rough leaves can grow up to 8 inches wide (20 cm.) The vine produces small, greenish white, male and female blossoms. After blossoming, the vine needs at least 12 hours of sunlight a day to produce fruit. The vine is a perennial, and will bear fruit for 3 to 5 years. To grow a Chayote vine, you can’t just plant a seed: you need to plant an entire fruit to give the seed the energy it needs to grow.

Chayote has pale green or greenish-white skin, depending on the variety. Some varieties have skin that is mostly smooth, others have skin that has furrows in it, others are just downright gnarly. Some even have skins with some pricklies on them.

Inside each Chayote, there is one large, soft seed that can be eaten (unlike true squashes, which have many seeds.) The white flesh is firmer and crisper than a cucumber, and sweeter than a zucchini would be. The flavour is actually quite bland and not that interesting.

When buying Chayote, choose firm ones with no bruising to the skin.

This is the Chayote that has the pricklies on its skin. The skin is not edible, not only because of the pricklies, but because it will be tough. These need to be peeled, either before cooking, or you can bake cut in half as you would a squash, then scoop the insides out afterward.

The root of the Chayote plant is called “chinchayote” in Mexico. It is a tuber with brown skin. They can be cooked like potatoes. Boil them in their skin, then peeled and served with butter. 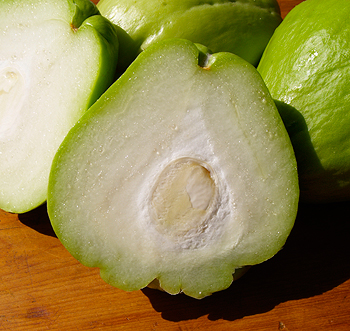 Chayote can be eaten raw, cooked or pickled.

To boil peeled: Halve or quarter the Chayote. Boil in half an inch of water (1 cm) for 7 to 9 minutes. Drain.

Peeled Chayote can also be fried up like hash, or cut into chunks and microwaved with a bit of water in the dish. To bake them, remove the seed, dig out a little more around it , stuff the cavity and bake.

Chayote have a little bit less water in them than does Summer Squash, so they will stay a bit firmer after cooking (unless you really go to town on the boiling.) They are more likely to retain their crunch, though, if steamed, sautéed or microwaved.

The seed can be fried.

A 200g medium Chayote has 50 calories, and is a good source of potassium.

Though the leaves are edible, just touching them can give rashes to some people.

Store in a loosely closed plastic bag in the fridge for up to 7 days.

Chayote is native to Central America. It was brought back to Europe by the Spanish.

Pronounced cha-YO-tay. Called “xu xu” or “chuchu” in Brazil. The Aztecs grew Chayote; their name for it was “chayotl.” Called “Choko” in Australia.

This web site generates income from affiliated links and ads at no cost to you to fund continued research · Information on this site is Copyright © 2022· Feel free to cite correctly, but copying whole pages for your website is content theft and will be DCMA'd.
Tagged With: Cajun Food, Latin American Food, Mexican Food