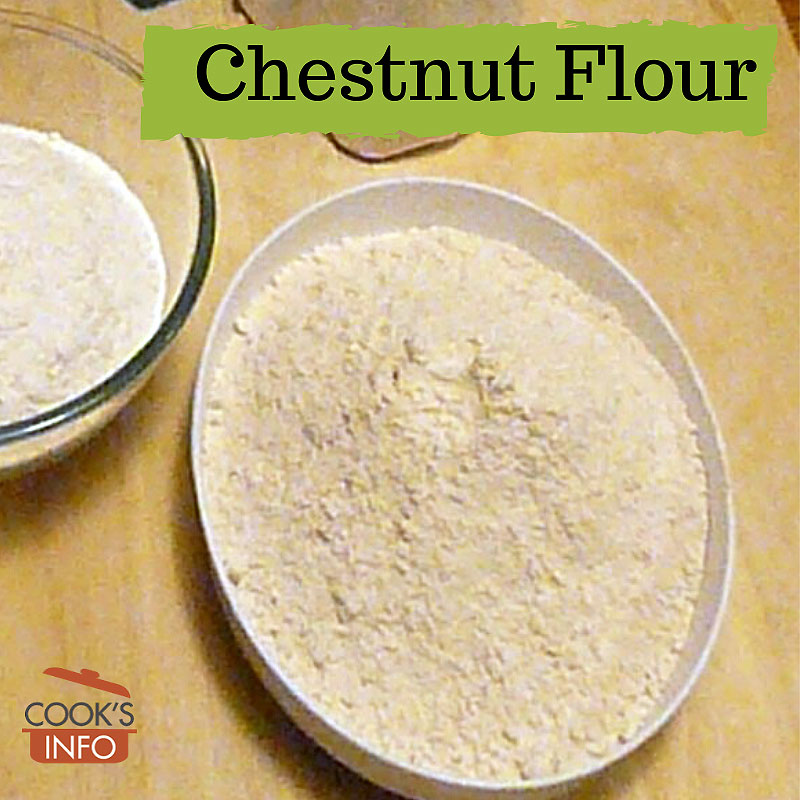 The chestnuts are dried for anywhere from 30 to 40 days, peeled, skinned (as the skin is bitter) then ground into a fine flour.

While chestnut flour has about the same amount of protein, fat and starch as does wheat flour, it doesn’t develop gluten for use in bread. Traditionally, this was seen as a weakness to be worked around, but in a era where awareness of gluten-sensitivity has developed, this natural “gluten-free” property has come to be marketed as an advantage.

“Chestnuts are preserved by drying, and flour is made from them. This flour, which is white with red particles here and there (debris of the outer skin) in inferior types, has a sweet flavour, an agreeable smell, and makes a non-elastic paste when combined with water.” [1]New Larousse Gastronomique. Paris: Librarie Larousse. English edition 1977. Page 217.

It is used in some European dessert recipes.

It is quite expensive, about $6.00 US for ½ pound / 225 g (2004 prices.) If the flour is fresh, it will smell of chestnuts. If there is no smell, then it is last year’s flour and will have no taste, so it’s not worth buying: at those prices, you want to make sure it has some taste.

You can add small amounts to wheat-flour bread recipes, or make flat breads out of it.

Don’t swap in more than one-fifth chestnut flour, as it weakens the dough of whatever you are making. That much will give you the flavour, without rendering what you are making just plain stodgy.

The Romans used chestnut flour to make pasta from.

It was subsistence food for peasants during the Dark Ages and Middle Ages. Polenta could be made out of it. Now, it is an expensive gourmet item. If only our ancestors could see what we pay for it now.

This web site generates income from affiliated links and ads at no cost to you to fund continued research · Information on this site is Copyright © 2022· Feel free to cite correctly, but copying whole pages for your website is content theft and will be DCMA'd.
Tagged With: Chestnuts