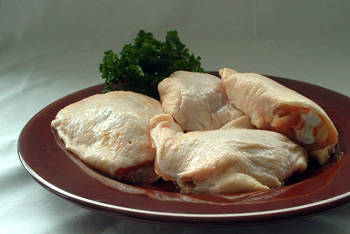 Chicken Thighs are the thigh of the chicken leg, just above the part of the leg called the drumstick.

They have dark, very tender meat.

Chicken Thighs are amongst the best chicken pieces to throw on your barbeque grill. Their fat content helps keep them moist and succulent.

Bone-in ones are usually sold with the skin on.

Boneless thighs may be the next big thing, according to some industry insiders (as of 2009.) Many people just don’t like bones in their meat, because it can remind them that they are eating an animal. Other people don’t mind the bones, but feel that chicken parts with bones are more work to cook with. Ones sold boned are sometimes called “Chicken Thigh Filets.” The boneless are usually sold skinned as well, though they can be found with the skin still on. 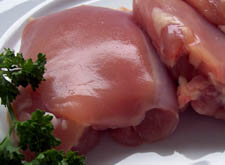 Discard the bone (or freeze for soup stock.) Trim away any tendons or sinew.

This web site generates income from affiliated links and ads at no cost to you to fund continued research · Information on this site is Copyright © 2022· Feel free to cite correctly, but copying whole pages for your website is content theft and will be DCMA'd.
Tagged With: Chicken Legs