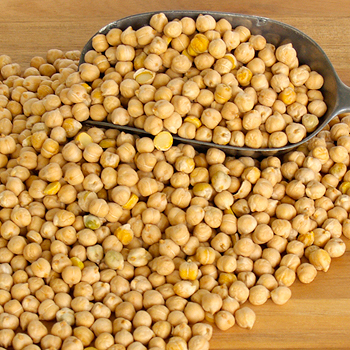 Chickpeas, aka Garbanzo Beans, are round legumes with a nutty taste. They are not a true bean.

They are popular in Greece, North Africa, India, Middle East, southern Italy, and particularly, in Spain, where they are prominent almost daily in one-pot meals and stews. Some Spanish regions such as Badajoz, Cádiz, Segovia, and Zamora are well-known for the chickpeas they grow.

There are several different kinds of chickpeas.

There’s a “Desi” type of chickpea, which is blackish, and a “Kabuli” type, which is golden. The Desi type is popular in Indian and Pakistan (where 90% of the chickpeas in the world are grown.)

The Kabuli type is more a category for various varieties, such as “castellano”, “pedrosillano”, “blanco lechoso”, etc. The castellano is the most commonly-grown variety in Spain and Mexico. It is yellowish, with a rough skin and is medium-sized for a chickpea. The pedrosillano variety is smaller, with smoother, darker-coloured skin and an almost perfectly round shape. Blanco lechoso is larger, with an irregular shape and pale skin; it is popular in the Andalusia region of Spain.

Most of us usually see the Kabuli type of Chickpeas canned in supermarkets, and the good news is, most people would be hard pressed to tell the difference between tinned Chickpeas and those you had cooked yourself. (The bad news is how much sodium is in those canned Chickpeas.)

Chickpeas have one of the longest cooking times of all beans (right up there with Red Kidney Beans and Soya Beans.)

If you come across a recipe that suggests adding a pinch of baking soda to the cooking water, this is no longer necessary, unless your water is very hard. It was thought to soften the varieties of Chickpeas on the market at the time.

Chickepeas are naturally low in sodium. Canned ones, however, will usually be very high in sodium. Drain from can into a bowl, wash with water, and rinse off to get rid of some of the excess sodium.

Chickpeas have a higher fat content than most other beans, which is part of the reason pastes such as Hummous made from them are so popular.
Good source of lecithin and potassium. Rich in calcium, iron, fibre, low in sodium.

Canned Chickpeas can last up to 5 years (unless advised otherwise by dates on tin.) When you cook dried Chickpeas, they can be kept in fridge covered for several days, or freeze them. Dried can be kept for up to a year.

Chickpeas are thought to be native to the Orient, or to the area of what is now Turkey. Chickpeas were eaten in the Mid-East as early as 4000 BC. The ancient Egyptians grew them.

They were well liked and heavily used by the Romans. The famous Roman orator, Cicero, had an ancestor that had a wart on his face that looked like a chickpea. The Latin word for chickpea is “Cicer”, hence the family name of Cicero.

You could buy Chickpeas as street food in Rome mixed with lupin seeds and sold hot. At festivals, Chickpeas were frequently thrown at and caught by the crowds.

Homer in the Iliad compares futile arrows bouncing off Menelaos’s breastplate to beans and Chickpeas. Garbanzo, the alternative word we use in English, comes from Spanish.

Chickpeas belong to what Indians in India call the “kabuli” group of Cicer arietinum. This is an allusion to Kabul, capital of Afghanistan, through which Chickpeas arrived in India in the late 1700s.