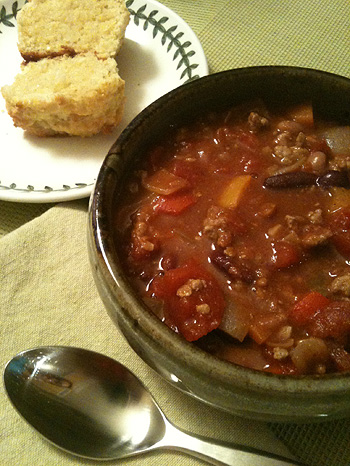 Contents hide
Chili con Carne is not a Mexican dish, as many think. If it were Mexican, the dish would likely still be there in Mexico: Mexican cooking has changed over the centuries to take advantage of new tools, labour-saving commercially-prepared ingredients (such as Masa Harina), and to take in new ingredients (such as beef and pork), but the traditional dishes have not gone away. In Mexico, it is only made in a few places for American tourists, because it is actually an American dish.

Some people call chili “a bowl of red.” Many regard the book “A Bowl of Red” (Frank X. Tolbert, Texas A&M University Press, 1953) as the “Chili Bible.”

There are many regional variations in America such as Tex-Mex, New Mexico, Cincinnati, etc. And that is where the debate over chili con carne starts. The controversy over what exactly constitutes chili con carne, and beyond that, what constitutes a good one, is perhaps only equalled by that over the correct way to make a Martini.

Some of the most basic recipes are basically spaghetti sauce with meat in it, flavoured with a little chili powder. Most chili fans, though, dismiss this as just a bland meat sauce.

In general, most people will start by agreeing that chili con carne is a meat-based stew. In the chili aficionado world, the ingredients for the dish are beef, chiles, oregano, ground cumin, garlic and water. Purists insist that there be no tomato, and no bean. The chile, onion (not sweet onions) and garlic (lots) should be the only vegetables. The focus is on the meat.

Purists say the meat should be stewing beef that is finely chopped — not minced (aka ground) beef, because it is too finely ground. The meat should be about the size of a shelled pecan nut. Note, though, that the name “Chili con Carne” doesn’t mean “chili con beef” — it just means “chili with meat.” It’s only in modern times that the meat got restricted to beef. Historically, it could have been anything from goat to deer to rabbit. In fact, American President Lynden Johnson preferred venison in his.

Chiles should be thought of as the vegetable base of the dish, not tomatoes. Anchos are good chiles to use for flavour depth, though Anaheim chiles also work well. A generous teaspoon of chili powder is assumed to be the equivalent of a chile. Many say a good rule of thumb is 2 to 3 chiles per pound (450g) of meat for mild, 4 for a hotter flavour. The chiles are cooked, skinned and mashed first (thus the popularity of chili powder for its ease of use.)

For the liquid, many old hands say that beef stock, tomato juice, beer, or wine are just wasted, and that you should just use water. If a thickener is use, it is sometimes masa harina.

Beans lovers say that without beans, Chili is just a meat sauce. And, they point out, beans should certainly act as a meat supplement in a recipe like this, particularly outside the cattle-trade areas of Texas where beef might not be as cheap.

As much as purists like to say what can’t be in other people’s chili, many of them also break the rules for themselves to allow their own “secret ingredient.” It varies from cocoa to peanut butter, pineapple, etc.

Some people add paprika in the absence of tomatoes to redden the sauce.

Chili can be served with crackers, tortillas, cornbread or tamales. The side beverage is often milk or beer.

In Texas, chili is not a stew, nor a sauce nor a ragout. It’s meat with sauce. There is no bean in it. Beans are cooked and served separately, maybe with rice as well. If you want, you can put some chili on top the beans and rice. One version of Texan Chili, Pedernales River Chili, which uses Tabasco sauce and tomatoes but leaves out beef suet, is said by some to have been President Lynden Johnson’s favourite. Johnson, though, preferred venison over beef in the recipe.

In New Mexico, red or green chile peppers can be used. There is also no bean. The meat is in larger chunks than for Texas-style, but there is less meat overall than in Texan versions, and more chiles.

Some say Chili con Carne was a way for poor people to stretch out meat, but that’s too simplistic — if so, other ingredients such as tomatoes, beans, etc surely would have been added as well.

Sadly, as nice as it might be to let Texans have their claim that they invented it, it seems we can’t, though no one would dispute that if it weren’t for them, we may not have heard of it. And certainly, people in Texas made the dish into the Chili con Carne that we know now.

Meat stews with chiles in them would have been made for thousands of years. Some even say that it Chili con Carne was an Aztec dish, but whatever meat stews the Aztecs added their chiles to, it wasn’t Chili con Carne as we know it. They didn’t have beef — or pork. Some wags have suggested mischievously that the meat in Aztec Chili was people, but the plain fact is that the Aztecs actually didn’t have a lot of meat of any kind in their diet.

Some attribute the first written Chili con Carne recipe to a Spanish nun in the early 1600s who never left Spain, but who would go into trances so that her spirit could walk amongst people in Mexico, and they gave her a chili recipe that called for antelope meat. There is no explanation as to how the Mexicans imported the antelope meat from Africa, and sadly, the recipe is no longer extant.

Something like Chili con Carne was already being made in what is now Texas, New Mexico, and northern Mexico during the Spanish period in those areas.

The actual term “Chili con Carne” to describe it started making its appearance in restaurants and bars in San Antonio, Texas, in the late 1840s. By 1850, the places serving it had added garlic, onion and oregano. One place known for serving it was the Meger Hotel, opened a bit later by the Kampmann family in 1859.

Women street vendors in San Antonio, dubbed “Chili Queens”, started selling Chili con Carne once the bars and restaurants had popularized it. They operated from carts in the Military Plaza Mercado and the plaza in front of the Alamo. The women had been there since Spanish times, selling food such as tamales, tortillas and enchiladas to Spanish soldiers, In 1887, the market area was moved to the place now called “Haymarket Square”, and the women moved with it. People from all walks of life bought their chili. The women made it at home and built small fires on the square to heat it for serving to customers. People ate it right there, sitting at wooden tables or on wooden stools, often in the evenings, when Mariachi street musicians came out to play. Not all the Chili Queens were Mexican, though, as might be assumed: some were American, with names such as Sadie and Martha.

In the early fall of 1937, all the Chili Queen street vendors were ordered closed down because they didn’t adhere to new sanitary regulations that had been passed. Some say the regulations were deliberately designed so that they couldn’t pass them, in order to stop them competing with restaurants that brought in more tax revenue. A few of the women made the transition to cafes, in order to carry on their businesses. In 1939, the Chili Queens were allowed to operate again, but shortly after America entered the Second World War (two years into the war, at the end of 1941), they were shut down again. Now, chili is only sold in Haymarket Square on Memorial Day weekends, a relaxation which started in the 1980s.

In 1881, William Gerard Tobin (1833-1884) negotiated a contract to sell canned chili to the American army and navy. In 1884, the Range Canning Company of Fort McKavett, Texas started to make canned chili made with goat meat, but the guiding spirit for the project, William Tobin, died just a few days after production started, and without him the product line failed. Its use of goat meat didn’t help, either.

Some say chili powder was made by small individual entrepreneurs and sold to tourists in San Antonio as early as 1855. These sources don’t happen to mention exactly how booming the tourist trade was in San Antonio at that time (though it was the largest town in Texas, the population is estimated to have been 3,488 in 1850 and 8,235 in 1860.) But they seem quite sure of this, even mentioning that the powder was sold in very small little boxes made from green Huisache wood (reputedly on display at the Institute of Texas Cultures in San Antonio.) In any event, the first larger scale, documented commercial sale of chili powder was done by a man named DeWitt Clinton Pendery in 1890 in Fort Worth, Texas. His grocery store had burnt down, so he formed the Mexican Chili Supply Company, and sold chili powder through it. Competition arrived four years later, when a William Gebhardt began making it in San Antonio, Texas (actually in New Braunfels, now a suburb of San Antonio.) He made it from ancho chiles. He called the chili powder “Tampico Dust” at first but renamed it in 1896 to “Eagle Brand Chili Powder.” The company, now called “Gebhardt Mexican Foods Company”, has been a subsidiary of Beatrice Foods since 1960.

The oregano that was first used in the Chile con Carne that we now know wasn’t in fact “Mexican Oregano”, as some mistaken zealots like to advocate for, but actually Mediterranean Oregano, reputedly brought over as seeds by immigrants from the Canary Islands in 1731.

In 1893, Chili con Carne was served at the Columbian Exposition in Chicago, at the “San Antonio Chili Stand.”

The Wolf Brand canned Chili con Carne was started in 1921 by Lyman T. Davis of Corsicana, Texas (owned as of 2005 by Stokley-Van Camp in Dallas, Texas.)

By the 1950s, there were already debates about the place of beans in chili.

The first Chili con Carne cook-off appears to have been held in October 1952 at the Texas State Fair. The contest was won by a woman, a Mrs F.G. Ventura.

In 1977, Chili con Carne was proclaimed the official state food of Texas by the Texas legislature.

In 1993, the Illinois State Senate poked a stick at Texas, declaring that Springfield, Illinois was to be the “Chilli Capital of the Civilized World” (in Springfield, chili is spelt with two “l’s”.)

Chili con carne, meaning “chile with meat”, is actually redundant — traditional chili always has meat in it. Almost all purists agree that there is no such thing as “vegetarian chili.” A stew with vegetables and chiles it might be, they say, but it ain’t chili.

“Stagg” is the name of the most popular canned chili in the UK.