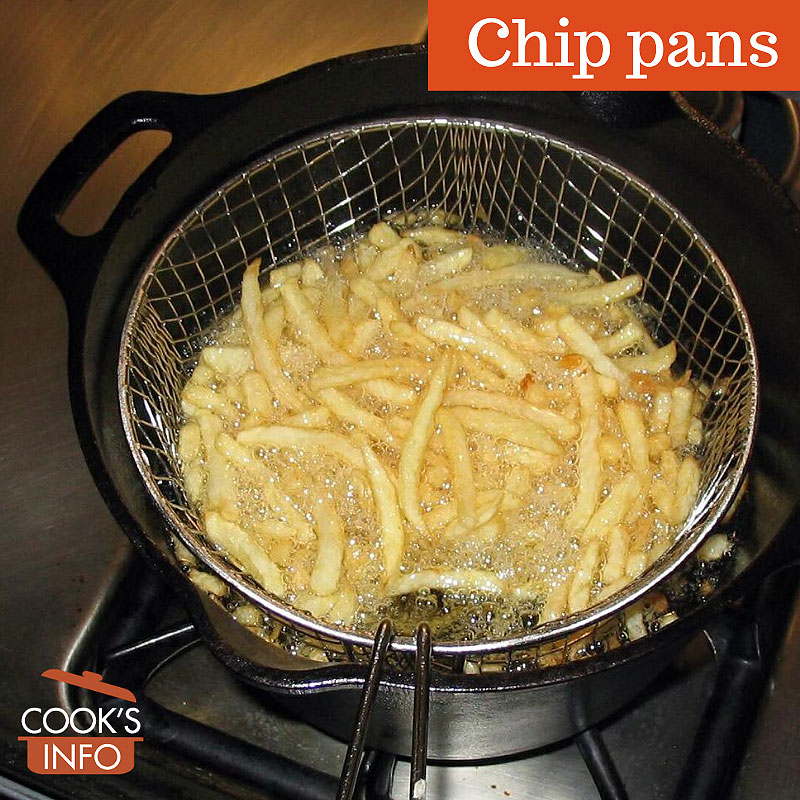 A chip pan is a deep pot used to fry chips (aka “French Fries” in America) in on stove-top burners.

For electric ones, see the entry on Deep Fat Fryers.

“The chip pan [is] a deep-sided open pan in which potatoes are fried in a basket” [1]Wilson, Bee. Consider the Fork: A History of How We Cook and Eat. New York: Basic Books. 2012. Kindle Edition.

Chip pans are made from typically made from aluminum or stainless steel, and come with a wire basket for handling the chips with. Older ones are cast iron. Not all modern ones are dishwasher safe; ask before purchasing if this is important to you.

To use, place on a stove-top burner, fill the chip pan one-third full of frying oil, no more than that, and turn the burner on to heat the oil. When a piece of bread crisps quickly in the oil, it’s hot enough. If smoking starts, turn the heat off.

Pat food dry before putting it in the oil, or you can get an explosion of oil out onto the burners which may go up in flames.

The danger of chip pans

“Chip pans are so dangerous that we urge people not to use them, if possible…We’d much rather you used oven chips or bought a portion of chips from the chippy, instead. If you need to deep fry things then get a thermostat controlled electric deep fat fryer; they’re much safer.” [2]Quoted in: Using a chip pan could be a recipe for disaster. Staffordshire Fire and Rescue Service. 25 March 2019. Accessed August 2020 at https://www.staffordshirefire.gov.uk/news/latest-news/using-a-chip-pan-could-be-a-recipe-for-disaster/

In some years past, the problem has been particularly bad. “In 1981 there were 21 deaths and 1,372 injuries caused by 15,000 chip pan fires.” [3]Cowpe, Chris. Chip Pan Fire Prevention. 1976-84. Institute of Practitioners in Advertising. Accessed August 2020 at http://www.loreto.herts.sch.uk/wp-content/uploads/Cowpe-chip-pan-fire.pdf

There have been many initiatives, including in some areas offers to exchange people’s chip pans for electric fryers for free or a nominal cost. As a result, England had seen a steady decrease in yearly chip pan fires, until they began increasing again. Some fire authorities point to television chefs encouraging people to use chip pans again:

“The London Fire Brigade today released new figures showing a rise in the number of chip pan fires in the capital. The Brigade believes the rise could be down to the current trend for gourmet chips, such as those that are triple cooked…. Many people think that chip pans are a thing of the past, but there’s been a recent rise in celebrities like Heston Blumenthal endorsing [them] on TV cooking programmes.” [4]London Fire Brigade. Brigade blames ‘posh chips’ for rise in chip pan fires. 17 February 2014. Accessed August 2020 at https://www.london-fire.gov.uk/news/2014-news/brigade-blames-posh-chips-for-rise-in-chip-pan-fires/

The numbers on chip pan safety are not good.

“Chip pan fires cause one fifth of all accidental dwelling fires attended by the fire and rescue service in the UK each year. Nearly 20 people are killed or injured every day in accidental fires that start in their kitchen, the most common of these caused by deep fat frying.” [5]Chip Pan Safety Advice. UK Fire Service Resources. Accessed August 2020 at http://www.fireservice.co.uk/safety/chip-pans/

Over 50 percent of injuries from fires in households had those fires started by chip pans.

“Almost half of the 4,900 chip pan fire casualties last year [took] place between 8pm and 4am… Chip pan fire burns accounted for 53 per cent of non-fatal injuries in household fires, with almost two in 10 resulting in some kind of casualty.” [6]McDermott, Nick. Chip pan fire? Think again before using a wet tea towel to put it out. London: Daily Mail. 18 December 2008.

“The chip pan… is an interesting example of how people often cling to kitchen technologies long after they have been proven to be lethal and inefficient.” [7]Wilson, Bee. Consider the Fork.

In addition to the physical danger to people, and the cost of repairs to householders, there’s also a cost to the taxpayer:

“Furthermore, chip pan fires represent a cost to the taxpayer in terms of emergency services such as the fire brigade, the National Health Service, and the police.” [8]Cowpe, Chris. Chip Pan Fire Prevention.

Do not fill more than one-third with oil.

Chip pans must never be left unattended, even for a second, even if someone knocks at the door or if the phone rings. You need to be fully cognizant when using one — in Britain, many chip pan fires burn down houses because people try to use one to cook up chips after a night at the pub.

The handle must not project out from the stove.

The following advice, from the Cheshire fire and rescue service, appears to be the current advice from all fire authorities in England:

To be clear, old advice about putting out chip pan fires with a wet towel, etc, has now been rescinded:

“For decades, the recommended approach to those confronting a pan fire in the home was for householders to attempt to extinguish it themselves. The most popular method was to place a tea towel under a cold tap, wring it out and then place the damp cloth over the rim of the pan. The advice, contained in several public information films starring celebrities such as chef Keith Floyd, is now considered too risky… ‘The wet tea towel advice is also contrary to all other advice we give to the general public about not tackling fires. ‘Although it was recognised that some people will continue to tackle chip and fat pan fires in the home, on balance, the best advice should be to “get out, stay out and call 999”. [10]McDermott, Nick. Chip pan fire? Think again before using a wet tea towel to put it out.

This web site generates income from affiliated links and ads at no cost to you to fund continued research · Information on this site is Copyright © 2022· Feel free to cite correctly, but copying whole pages for your website is content theft and will be DCMA'd.
Tagged With: Deep-Fried Foods, Pots