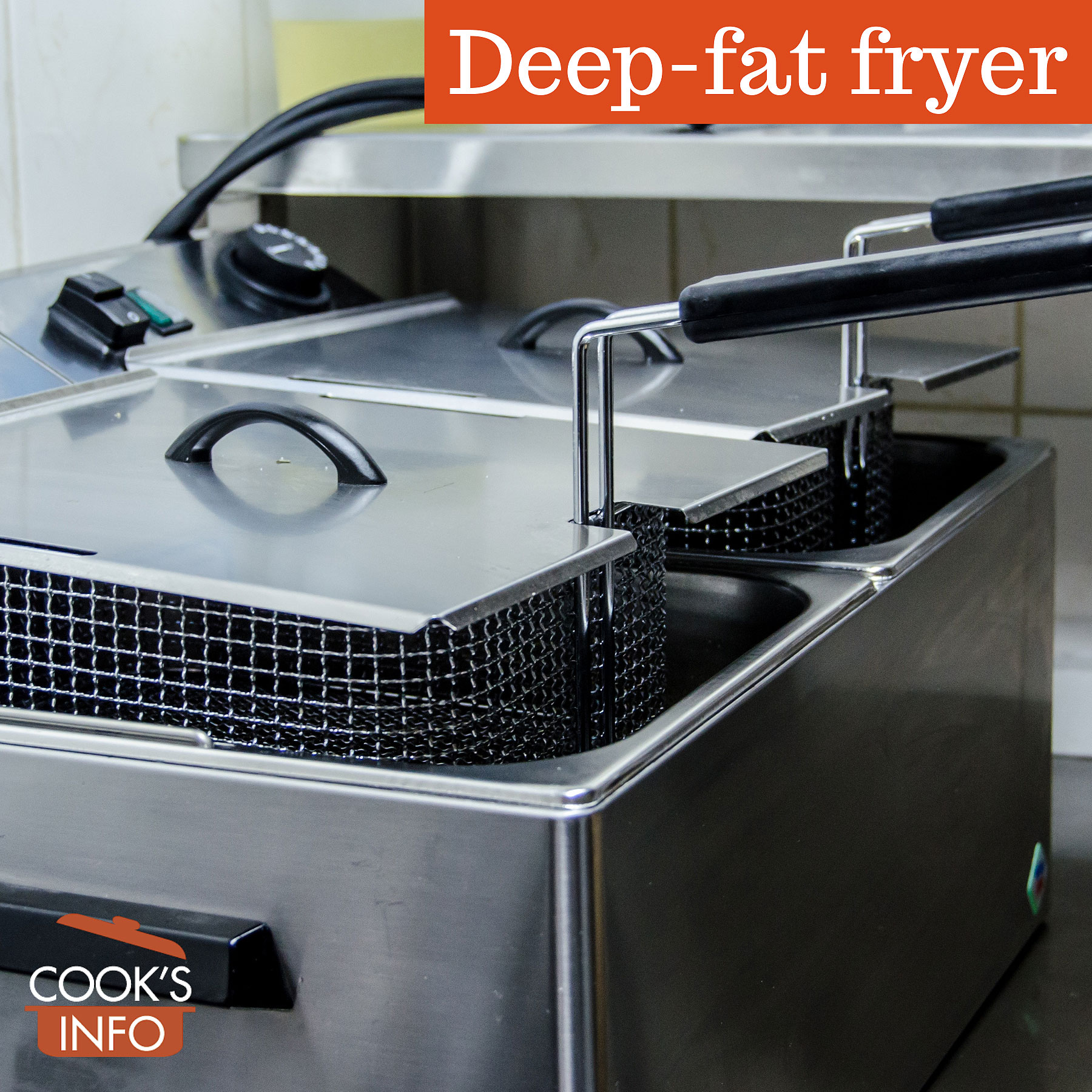 Deep-fat fryers are cooking vessels designed for the frying of foods in several inches or more of hot oil.

Almost all are powered by electricity now.

The frying range is generally between 160 to 190 C (325 to 375 F). Many cooks advise that it is best to use fats such as peanut oil (or beef tallow, if you’re lucky enough to have it), which have very high smoke points. Oils with low smoke points such as sunflower oil, when heated to high, can give the food a burnt taste, and even, in worst-case scenarios, burst into flame. 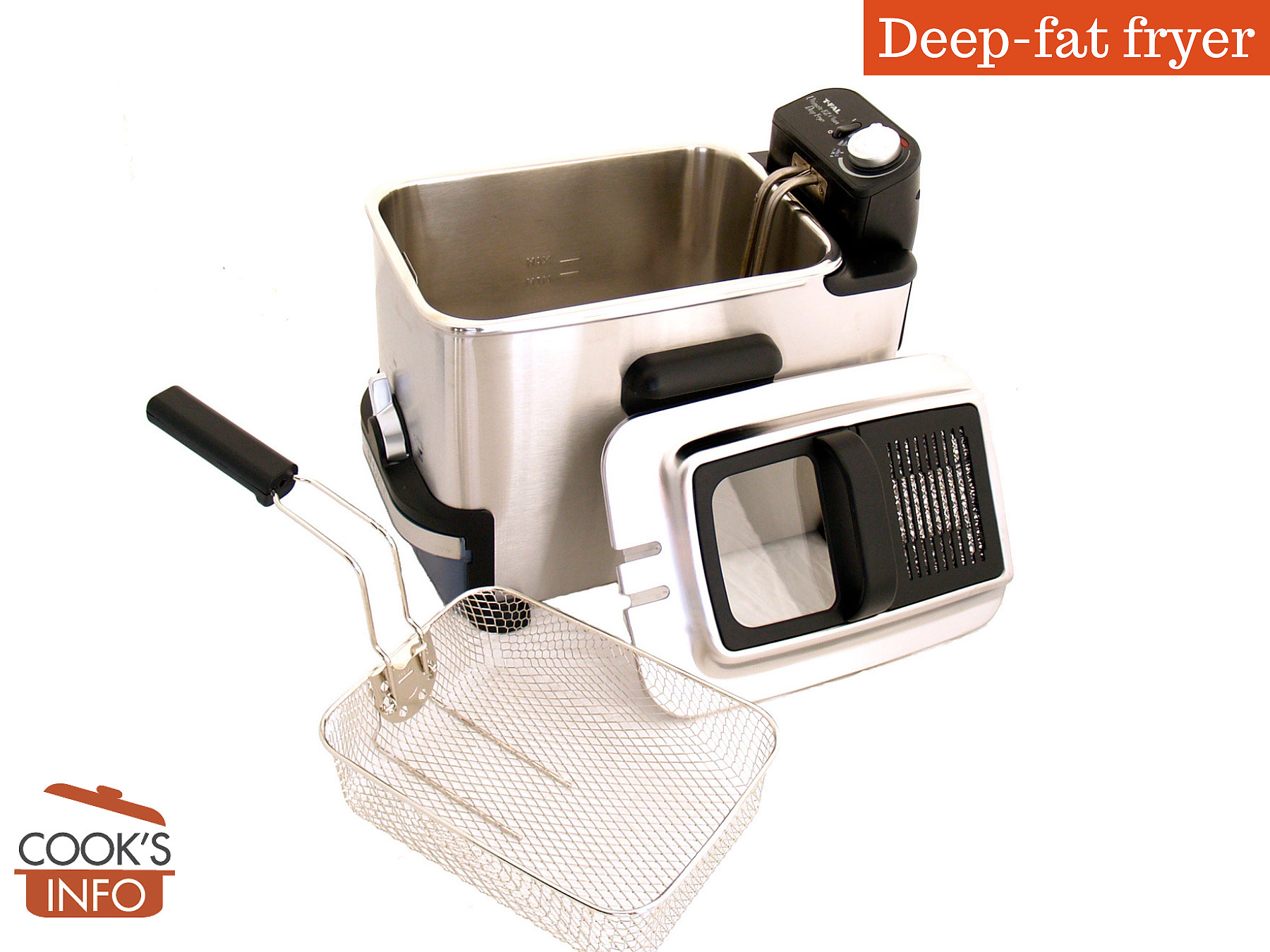 People tend to be as or more afraid of deep-fat fryers in the home than pressure cookers, even experienced foodies, and with good reason: stories of entire houses burning down are sadly all too routine in the news.

It seems that just about every instance of this involves stove-top deep-fat fryers. We don’t know of a single food-safety expert who does not advise against these now. See entry on Chip Pans for these.

Most modern electric deep-fat fryers have thermostats that will cut off the heat if the oil gets too high above a safe range. The thermostats will also keep the oil within 2 C (4 F) of the desired temperature range to help avoid the need for a cut-off in the first place. Some have a timer, with an alarm to let you know when the food being fried is done. Other features now include ventilation to avoid oil smells getting into the air and built-in filters. One odd feature about them that people comment on is that the electric cords tend to be quite short. No is quite sure why; some speculate that it’s a safety reason, so that long cords can’t be tripped over or tugged on by accident.

Insulation in some models around the fry pot can help to both reduce energy consumption, and make the device safer (cooler to the touch). In an ideal model, all parts (save understandably the control and heating element) can go in the dishwasher.

All electric fryers will come with a metal mesh basket that fits the inside perfectly. 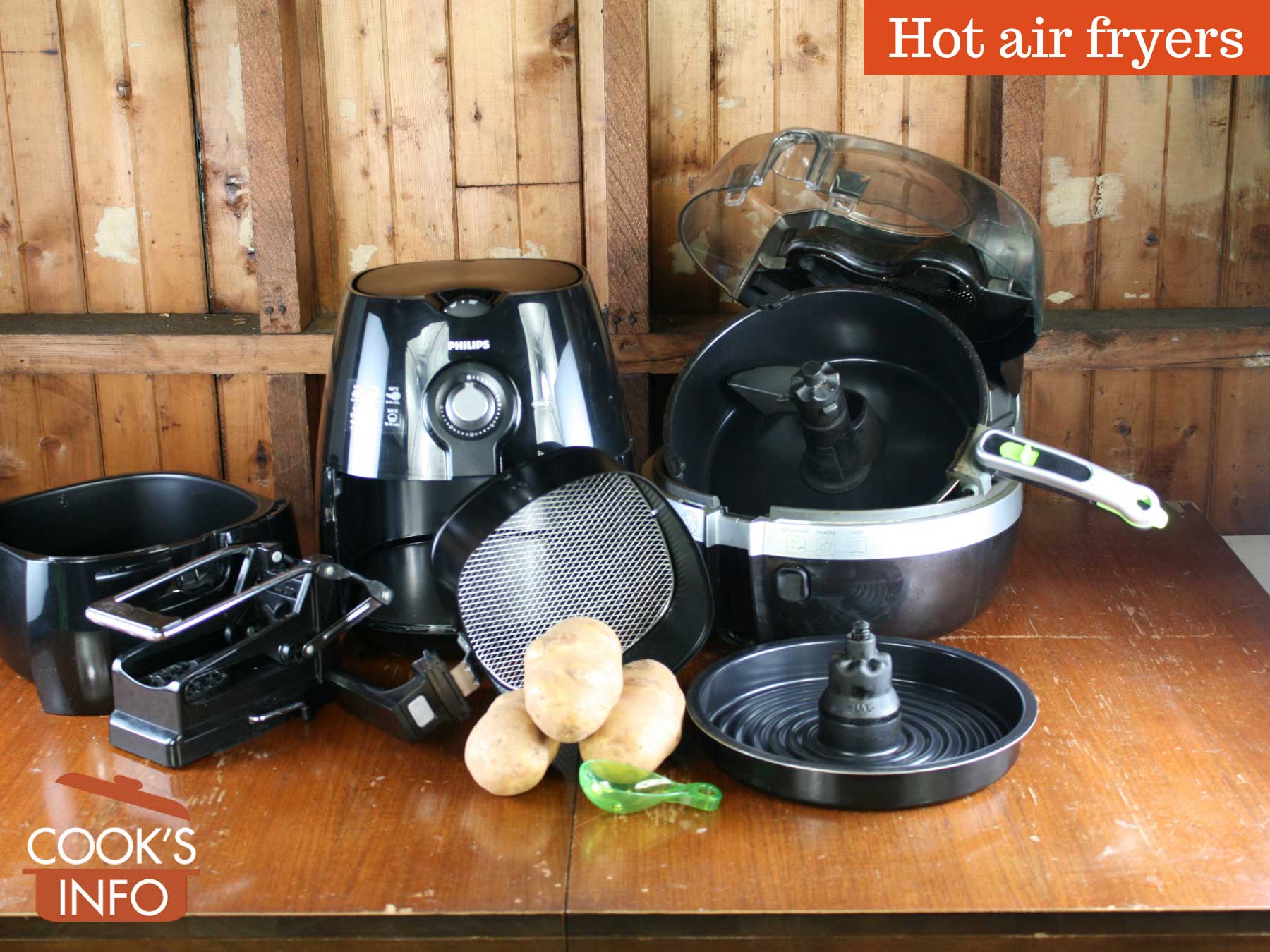 Hot air fryers are sold as a replacement for deep-fat fryers.

They are both safer, without the hot air, and more convenient. They don’t have the long heat-up times that actual deep-fat fryers require, nor the tedious greasy cleanup, and don’t require fridge space for the frying oil to be stored in.

While the taste of the resultant food is not identical to that of actual deep-fried food, fans say it’s “close enough” considering the convenience, and the health factors.

There are two main categories of home-user hot air fryers: basket-type and paddle-type. The basket-type requires you to shake the contents yourself; the paddle-type does the stirring for you.

Philips released the first home-use basket-type in 2010, calling it the Philips AirFryer ™.

Hot air fryers are not actually fat-free. They will use a very small amount of fat, typically a tablespoon per batch of food.

The machines use a grill along with a fan that circulates very hot air. They have varying capacities.

There are also commercial models of these hot air fryers.

Almost all commercial deep-fat fryers are electric, though you can get gas models.

Commercial ones can use a lot of energy, as they have to run non-stop during open hours. Electric ones are more energy efficient, but gas ones heat up faster, and can get hotter. Fryers with elements immersed in the oil are the most energy efficient.

Some commercial fryers have a low-heat zone or “cool zone” at the bottom, to help prevent burning of detritus which flakes off during the frying. This is usually achieved by suspending the element mid-way up in the fat.

Some commercial ones have built-in filtering systems to remove debris from the oil. Oils used commercially now have additives that also extend the frying life of the oil.

Fryers can take a long time to cool down. Allow for this in your planning for cleanup.

Don’t fill an electric fryer more than half full of oil, for safety.

The fat needs to be hot for minimal fat absorption into the food. If the fat is too cool, too much grease will be absorbed.

Never attempt to put out an oil fire with water; it will make the fire worse. Instead, if you can do so safely, disconnect the power and put the lid on, and leave the lid on for 30 minutes. If you cannot do so safely, call the fire department immediately.

This web site generates income from affiliated links and ads at no cost to you to fund continued research · Information on this site is Copyright © 2022· Feel free to cite correctly, but copying whole pages for your website is content theft and will be DCMA'd.
Tagged With: Deep-Fried Foods, Pots