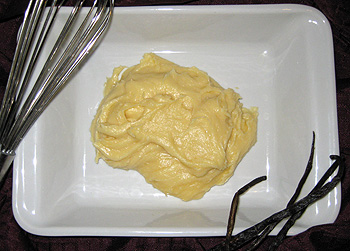 Choux pastry is a dough designed to make hollow puffy pastries from.

In Choux Pastry, steam is the leavener. The dough has a high moisture content which in the oven turns to steam and causes light pockets inside the pastry to form. The resultant pastries needs to be airy, crispy and light.

The dough is first cooked on a stove, in order to make a paste that a lot of the initial water has evaporated from. Moisture is then restored in the form of eggs beaten in off the heat. The dough is then formed into the desired shapes, often with the aid of a piping bag, and baked.

Some versions of Choux Pastry dough use whole eggs, others use only the yolks.

The British cook Delia Smith recommends 2 things: to use a strong flour (such as all-purpose) rather than a soft flour such as cake flour, and that after buttering the baking tray, you should run some cold water over it then tap the water off, so that small drops of water will stick and create more steam.

Optional: two tablespoons of sugar and a teaspoon of some flavouring such as vanilla, orange extract, etc, depending on what the intended use of the pastry is. If you are making savoury profiteroles, omit.

In a large saucepan, bring to a boil the water, butter and salt. When the water has boiled and the butter melted in, take the saucepan off the heat (leave the burner on), and whisk in the flour. Return the pan to the (high) heat, and stir the dough (wooden spoon ideal) until it “dries” enough to come away easily from the sides of the pan (about 3 to 5 minutes.)

Beat an egg in a bowl, then mix it into the dough. Repeat until all eggs are added. Only add the next one when the dough has completely taken up the previous one. This is the stage at which you are beating in air.

Pipe out onto a greased baking sheet in the sizes desired. Leave a good space between each, at least an inch (2 ½ cm.)

You have to proceed right from making the dough, to baking them. The dough won’t stand around.

Don’t open the oven during cooking or they may fall.

After baking, the base of each choux item should be pricked with a fork. This releases the steam that otherwise would condense as your baked item cools, therefore making the pastry soggy and soft.

“In 1533, when Catherine de Medici left Florence to marry the Duke of Orleans who was later to become Henry II, King of France from 1547, she brought with her to France her entire court, which included her chefs. Seven years later in 1540, her head chef, Panterelli, invented a hot, dried paste with which he made gateaux. He christened the paste pâte à Panterelli.

The original recipe changed as the years passed, and so did the paste’s name. It became known as pâte à Popelini, which then became pâte à Popelin. Popelins were a form of cake made in the Middle Ages and were made in the shape of a woman’s breasts. A patissier called Avice perfected the paste in the middle of the eighteenth century and created choux buns. The pâte à Popelin became known as pâte à choux, since only choux buns were made from it. [And choux buns were the same shape as small cabbages. Choux is the French word for cabbages.] Antoine Carême in the nineteenth century perfected the recipe, and this is the same recipe for choux pastry as is used today.” — Juillet, Claude. Classic Patisserie: An A-Z Handbook. Butterworth-Heinemann Ltd. 1998.