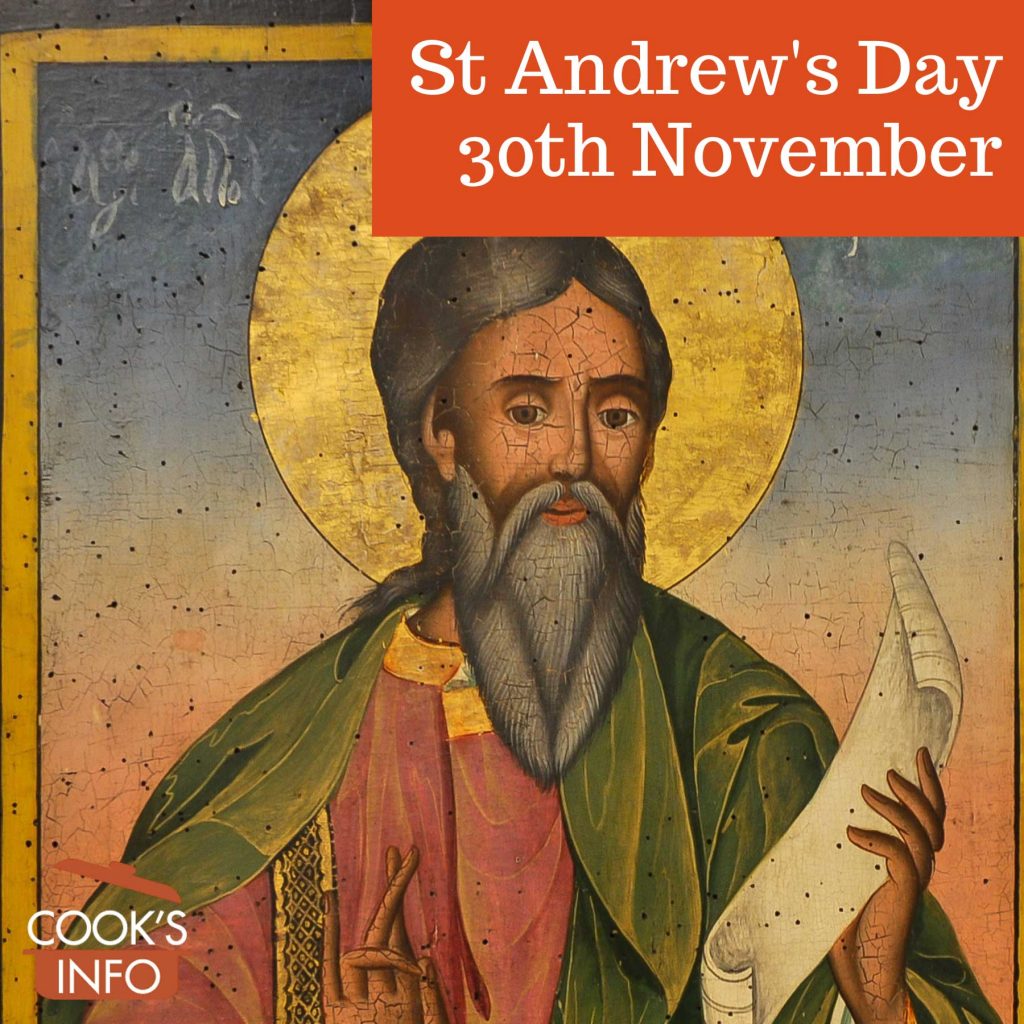 The 30th of November is the day of St Andrew, the Patron Saint of Scotland.

You might consider serving fish on this day because St Andrew was a fisherman, and maybe washing it down with IRN BRU.

On the night before St Andrew’s Day, single Scottish girls could pray to him for a husband. If a single girl could peel an apple in a whole, unbroken peel and then throw the peel over her shoulder, where it fell on the floor it would reputedly form the first initial of her future husband’s name.

In Eastern Europe, this was an evening for fortune telling by means such as melting wax and interpreting the shapes as it resolidified. 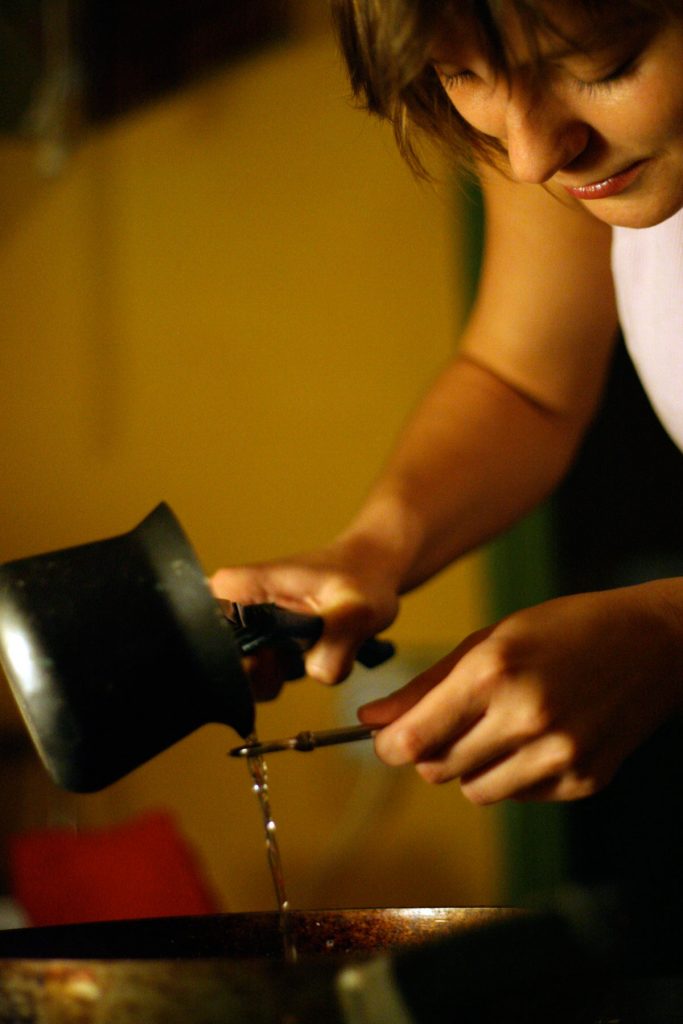 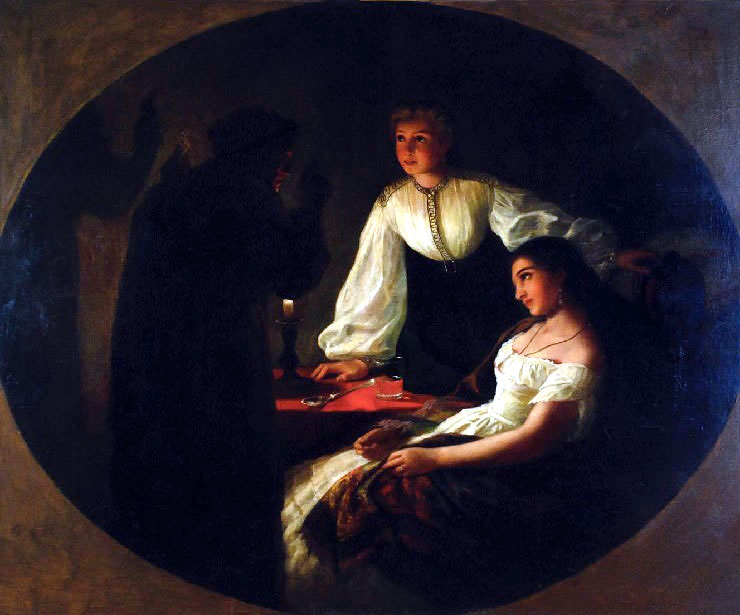 Special Christmas markets start opening at this time of year.

St Andrew’s Day was traditionally celebrated more abroad than at home. It is not a national holiday in Scotland. Only in 1996 did St Andrew’s, Scotland start holding a St Andrew’s week, with music contests, fiddlers, dancing, porridge-making contests and fireworks. Still, in 2004, only about one-quarter of Scots actually knew when the day was. The Scottish government is now using the day to promote Scottish culture and trade.

The Scottish flag, called the “Saltire”, displays the cross of St. Andrew. The cross is also incorporated into the British Union Jack, and into the flag of the Canadian province of Nova Scotia. The other flag of Scotland, with the lion rampant on it, is the Royal Standard of Scotland.

Andrew was a fisherman, like his brother Peter. He and his brother Peter were amongst the 12 apostles. He is said to have to been killed by the Romans in Patras, Southern Greece on a X-shaped cross (a “Crux decussata”), thus the X-shape of his cross on the Scottish flag. Some earlier versions of his life, however, had said the Romans nailed him to an olive tree: the X-shaped cross version doesn’t seem to have been introduced until around the 900s.

His bones were moved to Constantinople by the Roman Emperor Constantine.

Reputedly St Andrew’s cross appeared to an Angus (aka Oengus or Ungus) Macfergus (c. 731-761), leading an army of Picts against Saxon invaders near what is now called Athelstaneford (though much of the story is suspect, never mind the cross appearing in the sky). The Scots were consequently inspired eventually to make his cross the flag of Scotland, with the blue background representing the sky.

Some of St Andrew’s bones in Constantinople were taken to Scotland by St Rule (aka St Regulus, though it’s highly doubtful such a person existed under either name) or by Bishop Acca of Hexham in 733 AD and placed in a chapel at St Andrews (later a Cathedral started in 1160). The bones were probably destroyed during the Protestant Reformation in Scotland and the Cathedral is now in ruins. The bones that were left in Constantinople were stolen from it in 1210 by Italians and brought to the church of Sant’ Andrea Amalfi, Italy.

A piece of shoulder bone was sent back to Scotland in 1879 by the Archbishop of Amalfi. In 1964, Pope Paul VI gave Andrew’s head to Patras, Greece, and in 1969, a few more bones to Scottish Cardinal Gordon Gray. In Scotland, his bones are now in St Mary’s Roman Catholic Cathedral in Edinburgh.

A few books not included in the New Testament because they are considered apocryphal are the Acts of Andrew, Acts of Andrew and Matthias, and Acts of Peter and Andrew.

This web site generates income from affiliated links and ads at no cost to you to fund continued research · Information on this site is Copyright © 2022· Feel free to cite correctly, but copying whole pages for your website is content theft and will be DCMA'd.
Tagged With: Saints, Scottish Food