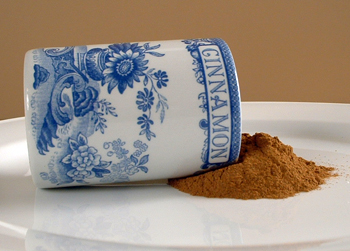 Cinnamon is the inner bark of branches from a tree that is a member of the laurel family (just as Bay Leaves and Avocados are.)

Cinnamon is often compared with Cassia Cinnamon. Food writers go on and on about Ceylon Cinnamon being the true Cinnamon; in fact, it’s probably de rigeur for them to do so. Pontificate as they may, though, it’s a losing battle in North America and in Southern Europe, where most people actually prefer Cassia Cinnamon.

Ceylon Cinnamon has a slight citrus flavour and is not as sweet as Cassia Cinnamon. It is tan-coloured (as opposed to Cassia Cinnamon, which is reddish-brown.)

Cinnamon comes in sticks and as a ground powder. 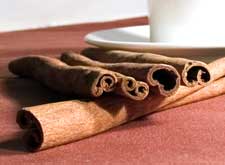 Cinnamon was used by the Egyptians as early as 3000 BC. It was mentioned in the Old Testament, though the variety they had access to was the Cassia variety.

Herodotus, the 5th century BC Greek historian, recounted the tales that the Arabs spun to throw Europeans off the scent of where Cinnamon came from. The Arabs said that it grew in swamps, protected by ferocious birds. The birds used twigs of Cinnamon to build their nests on top of inaccessible cliffs. Natives would tempt the birds with large pieces of meat: when the birds carried the meat to their nests, the nests would tumble over the cliffs down to the ground where they could be collected.

In Rome, Cinnamon was literally worth more than its weight in gold.

Ceylon Cinnamon only became available to Europe in the 16th century. Before that, Cassia Cinnamon was second in popularity only to pepper during the Middle Ages.

When Cinnamon trees grew just in the wild, they would grow up to 50 feet (15 metres) tall and it would be hard to harvest all the branches. The Dutch introduced plantations, where the trees were cultivated and kept under 8 feet (2 ½ metres) tall, which both made all the branches easier to reach and encouraged the trees to grow lots of little branches.

In the 1400s, Cinnamon was spelt “Synamone” in English.

This web site generates income from affiliated links and ads at no cost to you to fund continued research · Information on this site is Copyright © 2023· Feel free to cite correctly, but copying whole pages for your website is content theft and will be DCMA'd.
Tagged With: Ancient Greece, Roman