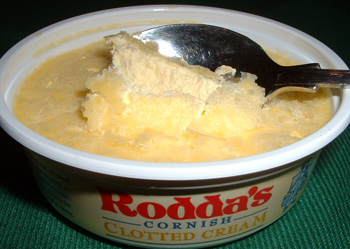 Contents hide
While it would be a stretch to say Clotted Cream is practically butter (butter has 80% butterfat and up, while Clotted Cream is “only” 55% butterfat), it is a thick, spreadable cream with the consistency of soft butter and has a pale, buttery colour. Its taste lies somewhere in between whipped cream and unsalted butter.

It was originally made in the Cornwall, Devon and Somerset areas of England from cream that was heated to evaporate the liquids, and then scalded to produce the golden crust typical of Clotted Cream on top. The texture is somewhat granular and the taste somewhat “nutty.” The milk needs to be unpasteurized at the beginning for this to work.

It can’t be used for cooking as it will separate when heated. It is meant to be served as a topping on scones or soft biscuits, a filling for cream cakes and buns, a garnish for fruit pies, or a foil for fresh fruit. 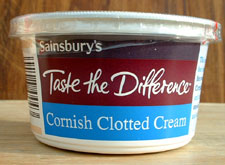 You won’t want to go crazy eating it, because you can almost feel your artery passages thicken as you eat it, but enjoy it from time to time. It is now available is some stores in North America.

On the 4 April 2008, intentions to award Cornish Clotted Cream the higher Protected Geographical Status were published in the European Union Journal. Barring no objections from other EU member states, the status would be official on 4 October 2008.

Don’t try to cook with it. You can use it as a filling for cakes or buns after they are baked.

Whipped cream — it won’t give you the same taste, but people will enjoy the whipped cream as a treat in itself. Or make a cream filling.

Greek Yoghurt and Mascarpone have completely different tastes, of course, but they are spreadable and will stay in place.

Consume by the use-by date. Some people report that they have frozen it with success for up to 1 month; others report that it hasn’t been worth using for them after freezing.

How to make your ordinary clouted-Cream: Take a quantity of Milk from the Cow, and put it into a broad Earthen-pan, and set it over a slow fire, letting it stand there from morning to night, suffering it not to boil by any means; then take it off the fire, and set it in some place all night to cool, in the morning dish off your Cream, for it will be very thick. Hannah Woolley. The Gentlewomans Companion. London. 1673.

This web site generates income from affiliated links and ads at no cost to you to fund continued research · Information on this site is Copyright © 2022· Feel free to cite correctly, but copying whole pages for your website is content theft and will be DCMA'd.
Tagged With: British Food, English Food, Protected Designation of Origin