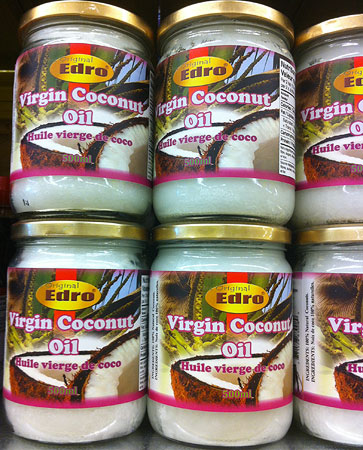 To make it, the flesh from inside a coconut (“coconut meat”) is dried, then the oil is extracted from it.

Coconut oil is very popular in Indian and Asian cooking. For certain Asian dishes, its taste is indispensable. In North America and the UK nowadays, it is mostly used for cosmetics and soaps. It is imported from Asian and tropical countries.

In France, the predominate brand of shortening, which is called “Végétaline”, is made from hydrogenated coconut oil.

For coconut butter: heat grated coconut in a frying pan just until it is about to start browning, but don’t let it brown. This will loosen up the oils in it. Then right away, whiz in a blender or food processor to make a smooth paste.

It was a firm in Hamburger, Germany, that first imported dried coconut for processing into a food oil in the first half of the 1800s.

Starting in the late 1950s, domestic oil producers started promoting their own oils. At the time, coconut oil was still used a great deal for commercial food purposes in North America and the UK.

Starting in the 1980s and 1990s, the switch away from it began as awareness built of its very high saturated fat level – 92%. The people helping to build awareness of this, and leading the campaign against coconut oil, happened to be or be funded by people who produced competing domestic oils, so it wasn’t entirely a self-less act of public education on their part. Nevertheless, the food media didn’t bother to connect the dots, and merely passed the PR releases on.

It now turns out that we turned from something bad to something worse: most of the domestic oils that were promoted as being healthy have turned out to be very high in trans-fatty acids, which are now believed to be even worse than saturated fat.

Coconut oil producers are now starting to try to fight back. One of the things they are saying is that half of the fatty acid in coconut oil is lauric acid, which gets transformed in our bodies to monolaurin, which the body can use to destroy certain viruses including HIV, herpes, influenza, etc.

This web site generates income from affiliated links and ads at no cost to you to fund continued research · Information on this site is Copyright © 2022· Feel free to cite correctly, but copying whole pages for your website is content theft and will be DCMA'd.
Tagged With: Asian Food, Coconuts