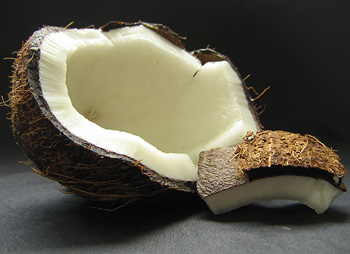 Coconuts
© Denzil Green
Contents hide
Coconut trees have a productive life of about seventy years, and can each produce up to seventy coconuts a year.

Each Coconut takes about a year to ripen. They actually grow inside smooth shells. This smooth shell is removed before sale to us: the hairy shell that we see is actually a second, inner shell.

The white inside, which we call the meat of the Coconut, is technically called the “endosperm.”

Many classic math puzzles involve monkeys picking and dividing up coconuts, but it’s actually true, at least the picking part. In Thailand, particularly on the island of Koh Samui, trained macaque monkeys are used to harvest coconuts. The monkeys can average 1,000 coconuts a day. The first monkey training school was established in Surat Thani, southern Thailand in 1957 by Somporn Saekow (1940 – 20 August 2002.) He wanted to show that a kinder yet more effective way of training monkeys for the picking could be done. At his school, the monkeys underwent a 6 week course.

When buying a Coconut, pick one that is heavy for its size. Hold it close to your ear and shake it; make sure you can still hear juice sloshing about inside. 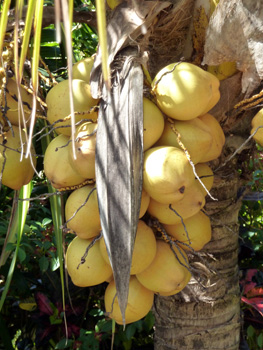 Pierce two of the three eyes with a screwdriver, or with a hammer and nail. Drain the Coconut juice out. To crack the shell, put it in a plastic bag, and then either put the bag on the floor and bash with a hammer, or bash the plastic bag onto a stone or concrete floor or step.

The “meat” can be hard to remove from the shell. Though you can buy Coconut scrapers, and they don’t much cost, they’re pretty much a single-function tool that wouldn’t get much use if you didn’t buy whole Coconuts very often. If you plan to use the Coconut for baking with, for cooking with in curries, or for making Coconut Milk, you can make the meat easier to remove by heating the Coconut shell in an oven at 350 F (175 C) until the meat just feels warm. This will cause it to pull away from the shell a bit, making it easier to remove. You can use the meat straightaway, or freeze it whole or grated for future use.

An unopened coconut can be just stored at room temperature up to 6 months. You’ll want to give it a shake from time to time to see if it’s drying out.

Once opened, refrigerate up to a week. Opened coconuts will last better with the coconut water poured over them.

Store grated fresh coconut in a sealed container for up to 5 days, or freeze for up to half a year.

Where coconuts originated is uncertain, and we may never know, as they didn’t need people or animals to carry them around the globe: a coconut would just float carried by the waves from one land mass to another.