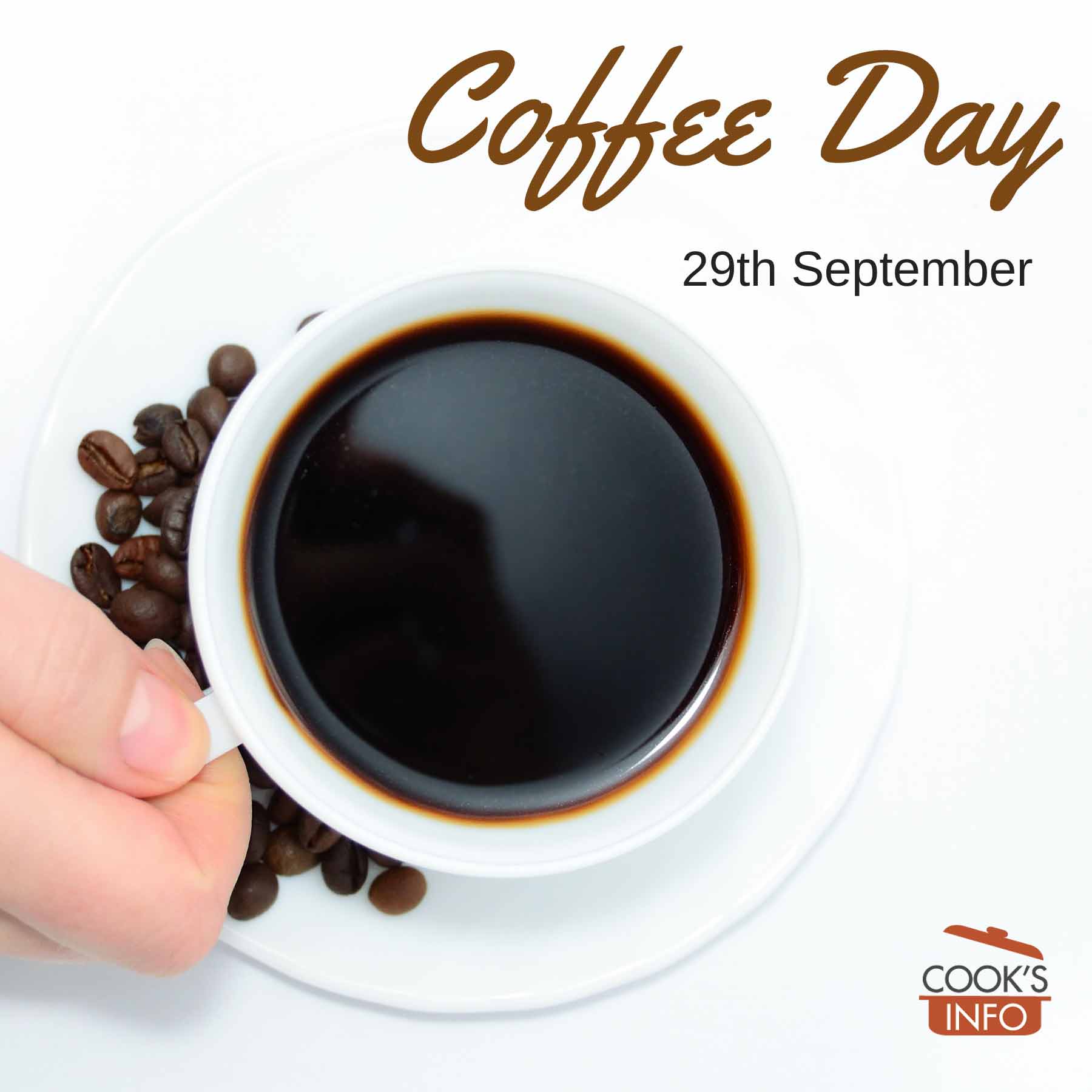 The 29th of September is Coffee Day.

Few people probably need a special reason to have a coffee on any given day.

But for today, you could mix it up: have coffee in a different form from your usual, or try a coffee-flavoured dessert or chocolate-covered coffee beans.

Note: this is a “made-up” food holiday. The genuine, non-fake, officially-recognized and endorsed International Coffee Day is 2 days later, on the 1st of October.

In the 1950s, a “National Coffee Day” was held in various months as part of fundraising campaigns for charities.

As an example, there was one in April in 1952 for the American Cancer Society:

“National Coffee Day for the American Cancer Society will be observed again this year, according to an announcement by the Society. The date for the observance in Fort Payne is Friday, April 25. Many restaurants and eating places donate a cup of coffee to their patrons, who, in turn, make a contribution to the National Cancer Fund Drive. The announcement says that most of Fort Payne’s cafes are participating.” — National Coffee Day to Aid Cancer Drive. Fort Payne, Alabama: The Fort Payne Journal. Wednesday, 23 April 1952. Page 1, col. 5.

There was another in January in 1956 for the March of Dimes:

“Tuesday [Ed: 10 January 1956] will be observed in Brownwood as “Coffee Day” in connection with the national observance for the 1956 March of Dimes campaign. The event here is one of many special functions being conducted during the March of Dimes. The Yellow Wagon Cafe is cooperating with the MOD in the Tuesday Observation. All receipts from the sale of coffee will be contributed to the Brown County March of Dimes.” — Coffee Day Set Here Tuesday for March of Dimes. Brownwood, Texas: Brownwood Bulletin. Monday, 9 January 1956. Page 1, col. 3.

In 1988, Holiday Inn championed the 15th of September as “National Coffee Day”, in aid of raising funds for resort for sick children:

“The Holiday Inn-Seguin will be fulfilling children’s dreams, as well as filling coffee cups, when hotel employees participate in Holiday Inn’s first National Coffee Day, Thursday, Sept 15. According to general manager Pam Mathis, all proceeds from coffee sales through room service, meeting-room functions or in the hotel’s restaurants will help build a Florida vacation center where children with life-threatening diseases can share special memories with their families.” [1]Soto, Elaine. Local Holiday Inn helps raise funds for terminally ill. Seguin, Texas: The Seguin Gazette-Enterprise. Wednesday, 7 September 1988. Page 11A, col. 1. [2]The village, Holiday Inn Kids Village, Kissimmee, Florida, was later renamed to Give Kids The World® Village and is still extant as of 2022.

In 2003, there was a Coffee Day on 2 June when Dunkin Donuts declared it “Free Iced Coffee Day” in the north-eastern United States (New York, New Jersey, Connecticut, Delaware and Pennsylvania); in 2004, they held the day on the 8th June.

By 2009, some newspaper columnists had begun reporting a date of the 29th of September for Coffee Day.

In 2010, Dunkin’ Donuts got behind the September day:

“Dunkin’ first celebrated it in 2010. That year the brand held “The Ultimate Dunkin’ Donuts Coffee Fan Contest”; last year, customers could get a free medium cup of the brand’s new roast on the day and Dunkin’ extended the deal to their locations around the world.” — Rubin, Julia. The Dubious, Brand-Led Surge of Fake National Holidays. Racked. 18 March 2015. Accessed December 2021 at https://www.racked.com/2015/3/18/8231685/fake-national-holidays

In some years, “Fair Trade Coffee Day of Action” days are held, though the months vary unpredictably from May to December.