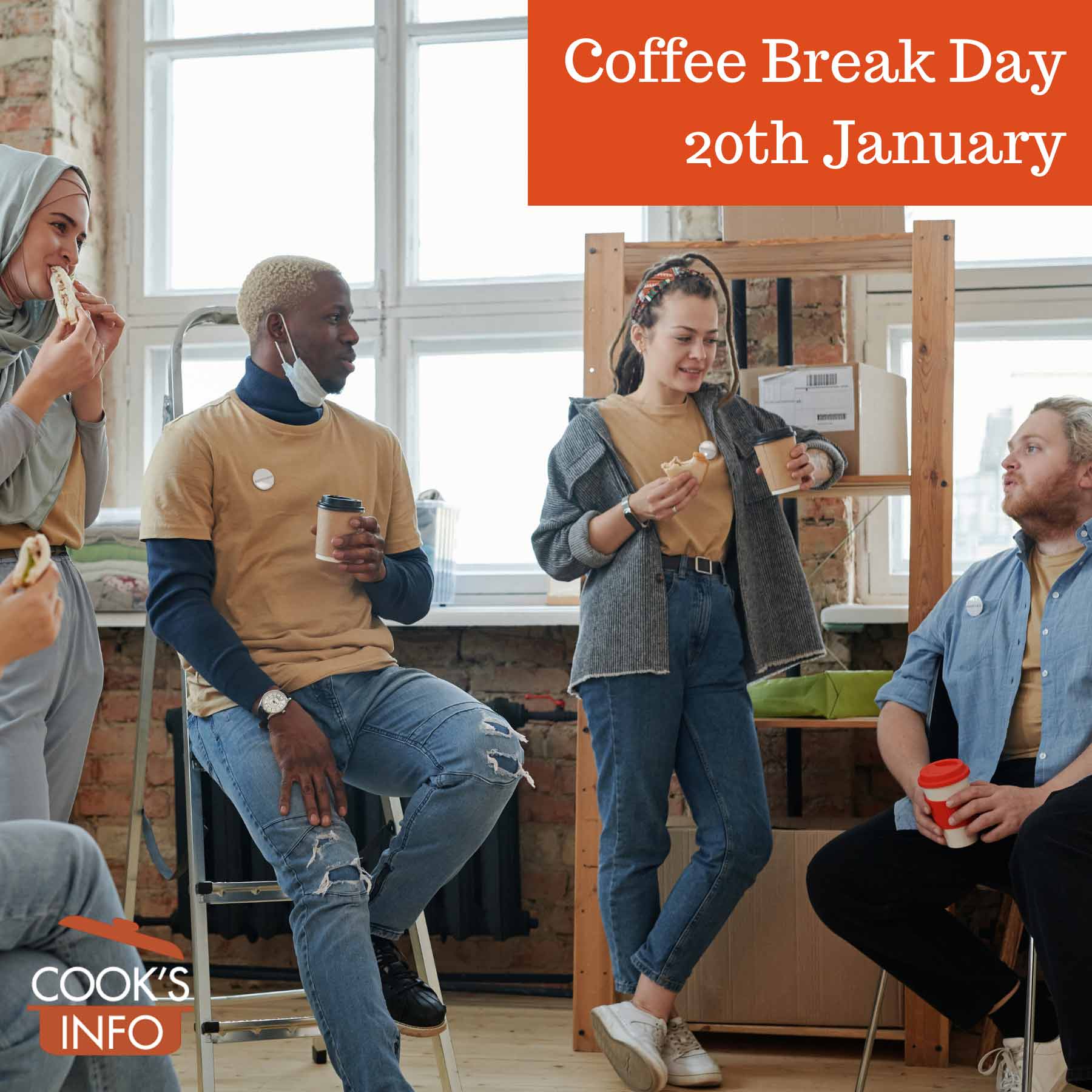 The 20th of January is Coffee Break Day!

It’s a day on which you may find your co-workers “extra perky” as everyone treats themselves to maybe a bit more coffee than usual!

Coffee breaks are now a vital part of the work day

Coffee breaks in the United States aren’t actually a legal right, at least under federal law, but they are certainly an expected feature of any job, and as an “institution” are now both a tradition and a culture.

If you’re in a country where this is also the case, take a moment to be thankful you live in a place where you get coffee breaks during the work day — it’s a relatively recent concept in human history, believe it or not, and still far from universal! Though in England, it’s called tea break time!

Types of foods have sprung up specifically for people to enjoy during a coffee break, from types of candy bars to pastries to healthier fruit and cheese snack packs. Admittedly, some keeners like to use their coffee breaks to get in 15 minutes of stretching and exercise while the rest of us tuck into the danishes and muffins. These breaks also often provide a chance for workers to network, exchange ideas, or just simply run quick work or personal errands.

A coffee break from work or chores can be either “you” time, or “you and your tribe” time, whoever makes up your tribe during a busy day. You can enjoy a cup of coffee by yourself just to clear your mind for a few minutes, or enjoy it with friends, family or work colleagues while having a quick gab and catch-up.

Or are you a non-coffee drinker, preferring to enjoy your break with another beverage entirely, such as tea, a soda pop, or a hot chocolate? (Hot Chocolate Day, by the way, is coming up fast, on the 31st of January.) 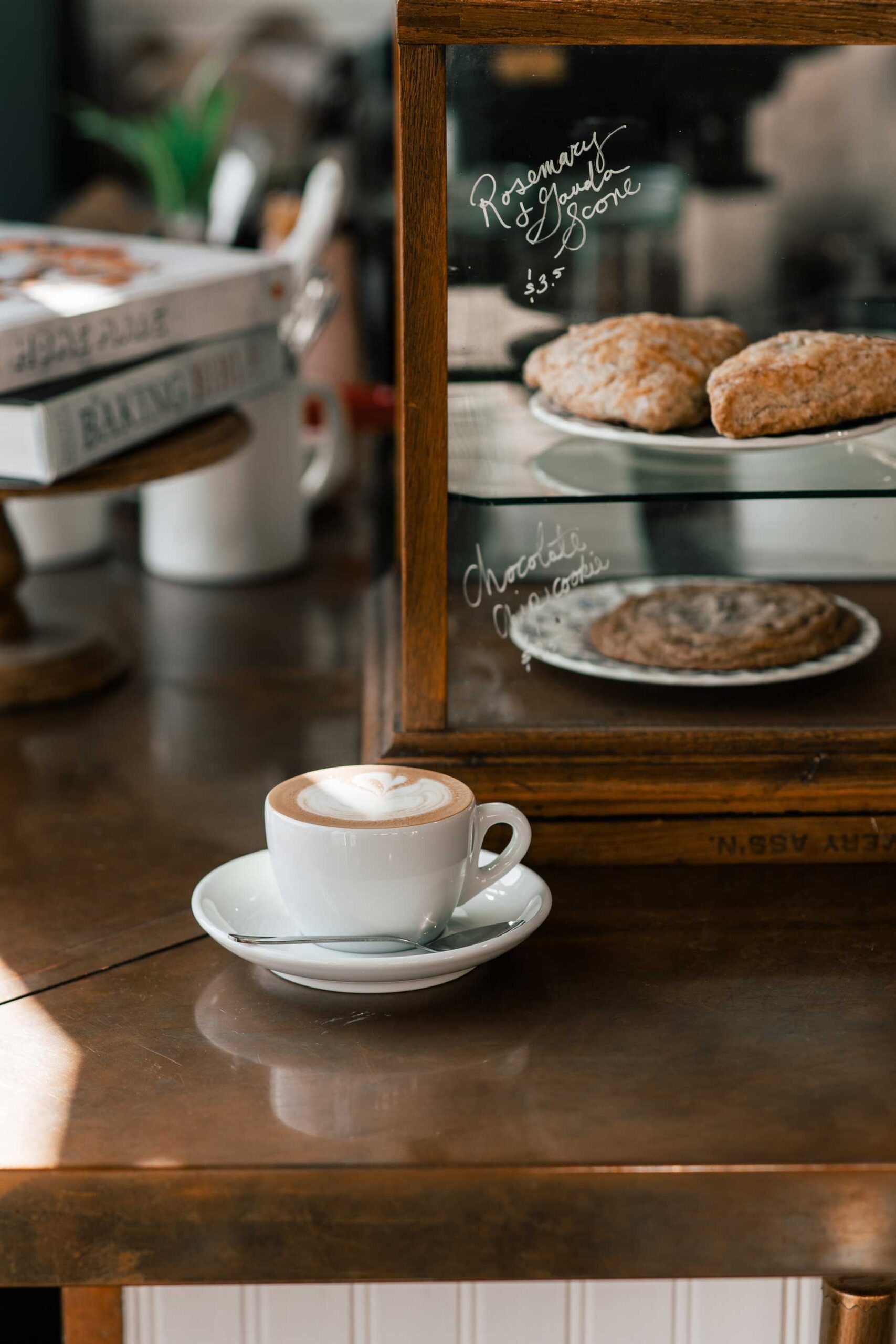 To celebrate the day, you might wish to try a premium type of premium coffee that you don’t usually get. You could even get right into the spirit of the day by having an Italian form of coffee — espresso — which was invented expressly for short coffee breaks.

Is the weather warm enough where you are to have an iced coffee? Or, if that is what you felt like, would you have it anyway, whatever the weather! If you are drinking an iced coffee outside in cold weather in January, do you keep your mitts on?

Some coffee places today may offer a free or discounted coffee, or a free upgrade, or a complimentary coffee with the purchase of something else for your break

Here’s an ad from the National Coffee Association 1984. “You are the New Coffee Generation!” Includes David Bowie, Heart, Kurt Vonnegut.

In the late 1990s and and into the early 2000s, the Alzheimer Society in Canada promoted a “National Coffee Break Day” in September. People were invited to host coffee breaks or coffee get-togethers as a fundraiser for the cause.

The first year was 2011. The Association said that:

“…industry members are encouraged to host consumer promotions and events that inspire consumers to take a break from their day with a cup of coffee… not only [to] use the event as a way to drive traffic at their stores but to get people involved in coffee culture and inspire them to participate in a charity event that they can set up surrounding the National Coffee Break Day.” [3]Is Your Chain Ready For National Coffee Break Day? La Jolla, California: CStore Decisions. 23 December 2010. Accessed October 2021 at https://cstoredecisions.com/2010/12/23/is-your-chain-ready-for-national-coffee-break-day/

The first print media notice of a “National Coffee Break Day” falling on the 20th January that CooksInfo is aware of occurred in November, 2010:

The first year, 2011, was the centennial of the U.S. National Coffee Association.

There doesn’t seem to be, however, any particular reason given for the specific date of the 20th of January.

For the first few years, the association made “point-of-purchase materials available, as far as ideas for promotions, templates for print ads…” [4]Is Your Chain Ready For National Coffee Break Day? La Jolla, California: CStore Decisions. 23 December 2010. Accessed October 2021 at https://cstoredecisions.com/2010/12/23/is-your-chain-ready-for-national-coffee-break-day/

There was a website for it, www.nationalcoffeebreak.org, but it has been abandoned and the domain name has now been claimed by someone else. Here is the archived Coffee Break Day website. 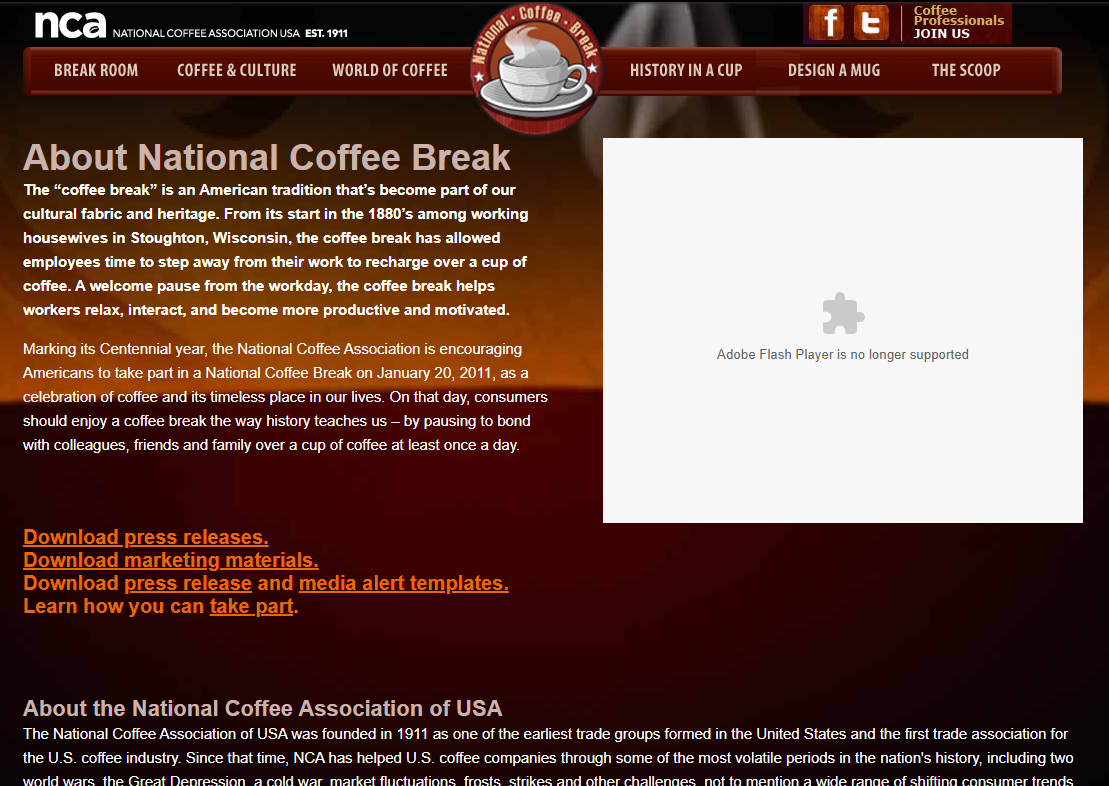 The campaign may not have been really well supported: after the initial activity on their Facebook and Twitter accounts in 2011, there has been no further activity as of December 2021. It’s always possible they really only initially meant it for the one year.

Evolution of the term “coffee break”

15 minute work-day breaks seem to have started around the start of the 1900s.

“For the past three years the 4,000 day shift workers and 1,600 night men have taken an unofficial 15-minute-break at the end of their regular working day for coffee before going on to work two hours overtime. Monday the company put an end to the practice. Day shift men attempting to leave the plant for coffee were turned back at the gates. As a result 700 refused to work overtime. Early yesterday morning 521 of the night shift made a similar move. Members of the union, Local 13, Industrial Union of Marine and Shipbuilding Workers of America (CIO) held a lunch-hour meeting yesterday and decided to work the overtime — without the coffee break — for a week, during which time they will ask the Navy conciliator for the yard to restore the 15-minute coffee period.” — Shipyard Men Beg Time for A Cuppa Java. New York, New York: Daily News. Wednesday, 5 April 1944. Page 31, col. 1.

In 1945, there’s a mention of older people making fun of the younger generation for taking coffee breaks during work days:

“They look upon the easy life of our younger citizens with scorn. They pooh-pooh the coffee breaks, the short working day, the long weekend…” — Need New Names For Our Senior Citizens. Hagerstown, Maryland: The Morning Herald. Saturday, 6 October 1945. Page 4, col. 3.

Also in 1945, there’s mention of an afternoon coffee break provided to a visiting delegation from another town:

“Points of interest visited by the men in the afternoon were the Water Works Department, the Sewage Treatment Plant, Metalloy Foundry and Rima Manufacturing Co. At the same time the women were touring Sacred Heart Catholic Church, the Library, and Coleman Manor. In the late afternoon the group joined together and paused for a coffee break at the Tiffin Street home of Duane and Joan Murphy.” — Hudson Entertains Manchester. Hagerstown, Maryland: The Morning Herald. Thursday, 8 November 1945. Page 16, col. 1.

In 1946, there’s a mention of homemakers taking coffee breaks:

“And it does take stamina to work 16 hours a day, or more. Granted, there are frequent coffee breaks, but few career women are “on call” for duty as many hours as the home professionals.” — Cunningham, Dorothy. The Professional. Hagerstown, Maryland: The Morning Herald. Wednesday, 2 January 1946. Page 6, col. 1.

In 1947, a coffee break is referred to as a “midmorning second breakfast” and said to be a “universal habit”. The writer mentions that someone should open a business selling pastries for people on coffee breaks:

“Even the boss does it now. The midmorning second breakfast has become a universal habit in America, and people who figure such dull things as load limits on elevators say they no sooner get the hordes of office workers upstairs than they are swarming back down, like a drove of determined lemmings. Smart business, which figures efficiency along with profit and loss, has established a philosophy toward the coffee’ break. Telephone Company officials were among the first to think of it. They’ve been encouraging a 15-minute “relief” morning and night for years, and say women, especially, return in better shape for work. Atlanta restaurants, who like the tinkle of nickels in their cash registers, note the trend is growing, and that every day more coffee drinkers say “and bring me an order of toast, too.” Sweetrolls, if they could be found, would be premium items (someone could make a fortune on coffee cake in our town), and doughnuts, no matter how soggy, go like waffles and honey with the ravenous midmorning diners.” — CUPPA COFFEE. Atlanta, Georgia: The Atlanta Constitution. Monday, 17 February 1947. Page 3, col. 2.

In 1948, a “Help Wanted Ad” in Minneapolis, Minnesota specifically mentioned “coffee breaks” as a perk of the job: 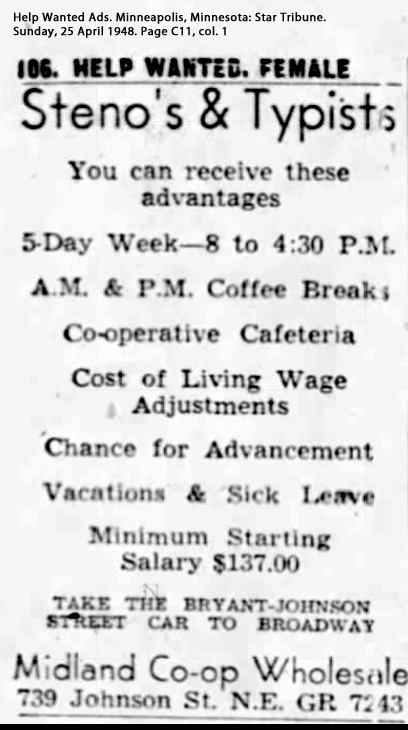 At the start of the 1950s, use of the term “coffee break” — and acceptance of the practice — starts to take off a bit more.

In Ottawa, Canada, home of the country’s federal civil service, there was a debate about how healthy it was in the winter for civil service office women to go out into the cold to purchase a coffee somewhere:

“Civil Service health authorities look with approval on the 10-minute “coffee break” for employees mornings and afternoons, Dr. R. G. Ratz, Chief of the Civil Service Health Division told The Journal today. In Toronto yesterday, George T. Jackson, director of the organization and classification branch of the Civil Service Commission deplored the time lost through these recess periods and recommended that instead of staff going out for coffee or soft drinks that they should be brought in to the office.

Dr. Ratz said that “there is no indication whatever” that even on cold Winter days girls who run out of their offices for coffee without coats, hats or overshoes, catch cold or ‘flu any more readily than those who do not. They’re remarkably hardy plants”, the Health Chief said of girls in Civil Service departments. “There’s nothing in our statistics to show that their health is affected to the slightest degree by running out rather thinly-clad for a couple of hundred feet or even a block. “We think it’s a good thing for them to have a break”, he added. “I think that these girls are much more likely to catch cold from getting over-tired, sitting in crowded movies and crowded restaurants where people are coughing and sneezing. Those are the likely places to pick up colds and Winter infections.”

Dr. Ratz made it clear that there is a great difference between a girl running a few hundred feet in her office dress with thin stockings and no coat, and one being exposed to the cold for half an hour or an hour thinly-clad. The latter is looking for trouble. The former hasn’t seemed to hurt the girls a bit, he said.” — Java-and-Coke-Break ‘Good’ for CS Girls. Ottawa, Canada: The Ottawa Journal: Thursday, 12 January 1950. Page 16, col. 2.

In 1952, the Pan American Coffee Company launched a year long company to promote the practice of having “coffee breaks” during the work day. It looks like the first volley of the campaign was “softening up the press” in January with light stories and stats:

On the 13th of April that year, the first actual campaign promoting the practice appeared in newspapers and magazines across the United States.

The ads ran throughout all of 1952. Here’s a Christmas one from the 21st of December: 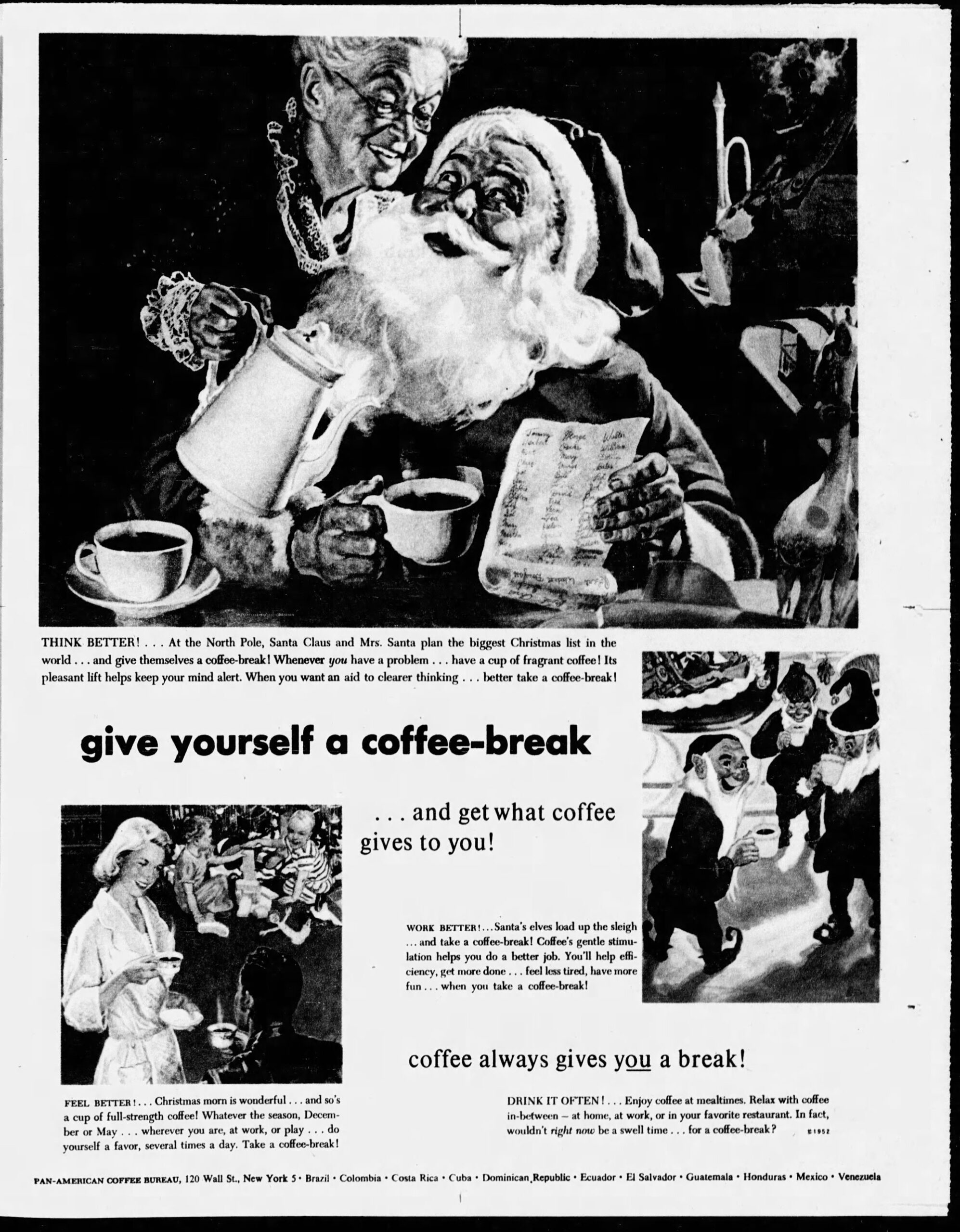 This web site generates income from affiliated links and ads at no cost to you to fund continued research · Information on this site is Copyright © 2023· Feel free to cite correctly, but copying whole pages for your website is content theft and will be DCMA'd.
Tagged With: Coffee