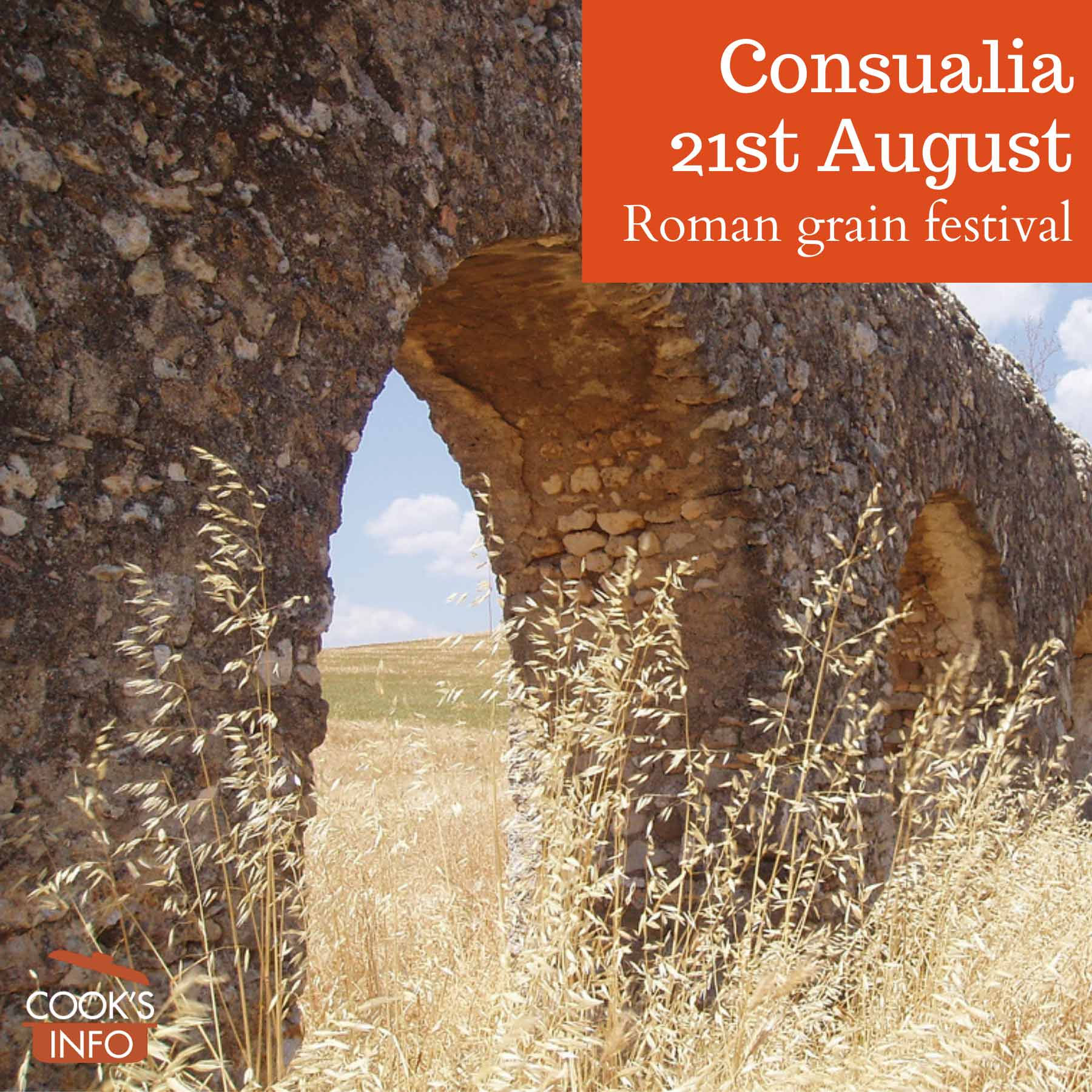 The 21st of August was the Roman festival of Consualia.

It honoured the minor god Consus, a diety of the harvest, and of stored grain.

In Rome, grain was often stored underground, in vaults and in oversize buried pottery jars called “dolia”. Consus’s shrine was underground as well, helping to create an association between him and stored grain.

His underground shrine was incorporated into the middle of the Circus Maximus, and typically kept covered. 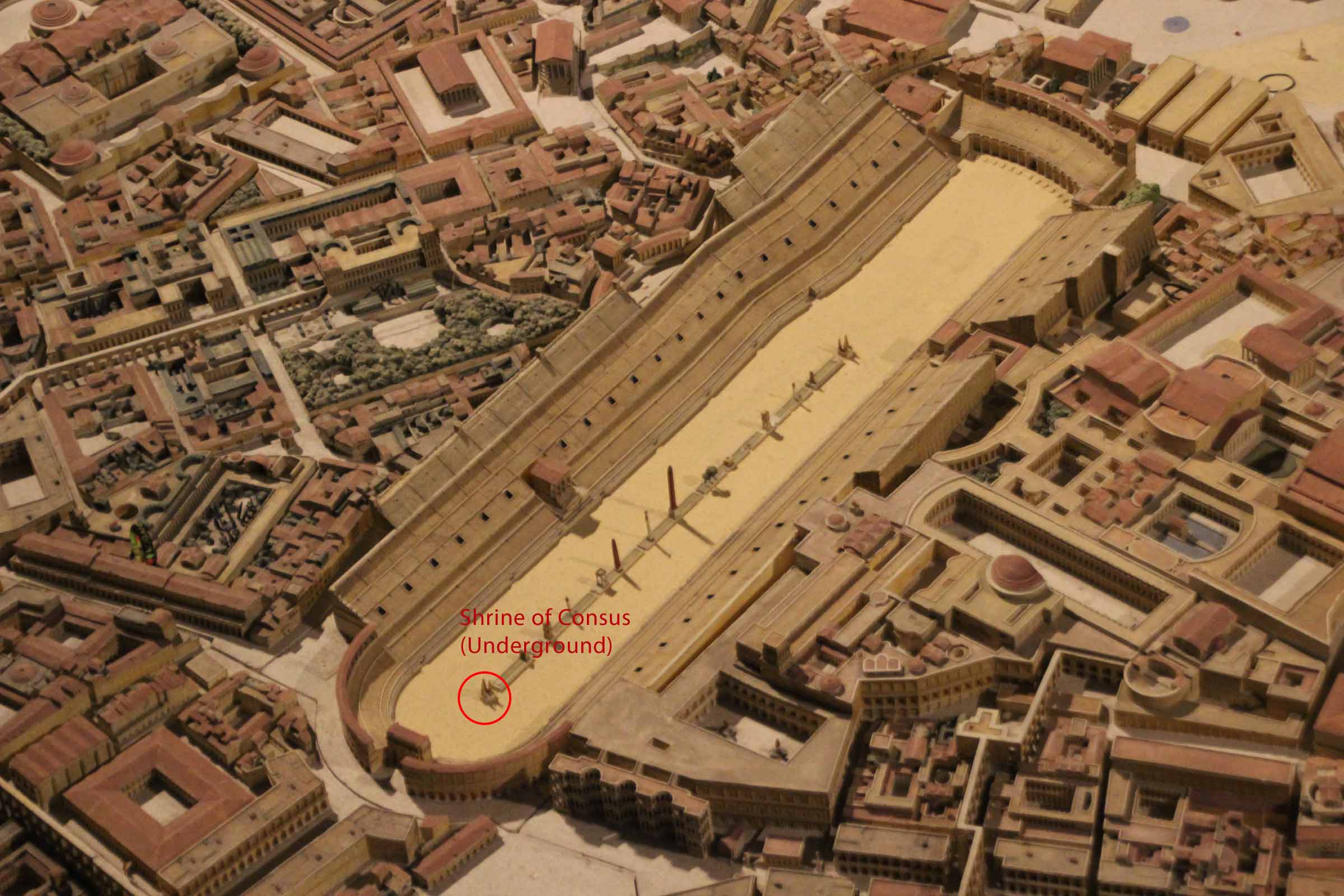 It would be symbolically uncovered on this day [1]Smith, Philip. Consualia. In: Smith, William. A Dictionary of Greek and Roman Antiquities, John Murray, London, 1875. Pp 351-351. , and sacrifices of burnt offerings and librations offered by the priest called the Flamen of Quirinus, accompanied by the Vestal Virgins. [2] “Et nunc ara Conso illi in circo demersa est ad primas metas sub terra cum inscriptions eiusmodi: CONSUS CONSILIO MARS DUELLO LARES COILLO POTENTES. Sacrificant apud eam nonis Iuliis sacerdotes publici, XII Kalend. Septembres flamen Quirinalis et virgines.” Tertullian. De spectaculis. V. 93. “This is still (I might add) an underground altar, dedicated to that Consus, in the Circus, at the first turning-point, with this inscription: ‘Consus in counsel, Mars in war, Lares Coillo mighty.’ Sacrifice is offered on it on the seventh day of July by the state priests, on the twentieth of August by the Flamen of Quirinus and the Vestal Virgins.’ ” — Tertullian. De spectaculis. Glover, T.R., Translator. Cambridge, Massachusetts: Harvard University Press. 1977. Pp 246-247.

Games called the Consuales Ludi were then held in the Circus Maximus. They were of a rustic, fun nature. The program included chariot races, including one unusual one with asses.

Horses, mules and asses got the day off work and were decorated with flowers and paraded through the streets.

Consus’s grain connection and underground altar give him associations with Ceres, the goddess of grains, whose daughter Proserpina was kidnapped by Hades to live underground.

Another Consulia was held later in the year on the 12th of December:

“The 12th December may have been the day when the grain was first checked and when the first grain was removed for trading and consumption, or it may have been a day for a symbolic ritual, the offering of the first grain or a celebration of the opening of the granaries.” [4] The Colchester Archaeological Trust online. The festival of Consus: Today, 12th December. Colchester, Essex, England: The Colchester Archaeologist. Accessed August 2021 at https://www.thecolchesterarchaeologist.co.uk/?p=16928

Consus also had another minor duty as god of counsel. Some say it’s because he possibly counselled Romulus to kidnap the Sabine women. (See below.)

The history of the Consualia starts with the legend of Romulus and Remus, founders of Rome.

In the legend, Romulus discovered the altar of Consus underground in the valley between the Aventine and Palatine hills, near to where many hundreds of years later the Circus Maximus would be built.

Romulus decided to hold a feast at the site of the altar to celebrate the discovery of the god’s shrine. The feast would include races, and games.

Romulus used the feast as an excuse to invite the Sabines to come to Rome, so that Roman men could abduct their daughters for wives.

“In order to [achieve] this, [Romulus] first gave out that he had found the altar of some god which had been covered with earth. This deity they called Consus or God of Counsel. Upon this discovery Romulus by proclamation appointed a day for a splendid sacrifice with public games and shows. Multitudes assembled at the time and he himself presided sitting among his nobles clothed in purple. As a signal for the assault, he was to rise, gather up his robe, and fold it about him. Many of his people wore swords that day and kept their eye upon him watching for the signal which was no sooner given than they drew them and rushing on with a shout seized the daughters of the Sabines, but quietly suffered the men to escape.” — Florian, Jean Pierre Claris. (J.A. Ferris, Translator.) Numa Pompilius: Second King of Rome. Boston: Ticknor, Reed & Fields. 1850. Page 263.

The original site of the altar to Consus was incorporated right into the structure of the Circus Maximus:

“There was an altar to Consus in Rome which stood on the site of and pre-dated the Circus Maximus. When the Circus Maximus was built, the altar to Consus was included within it, towards the south-eastern, curved end, near the first meta (the far turning-post)… The old altar to Consus was later incorporated into the platform of the first meta itself of the Circus Maximus. This platform was built as a chamber with a small sub-chamber cut into the rock below which formed a symbolic underground granary. (In the Roman world, grain was stored underground.) The chamber functioned as an altar or ‘temple’ and there was an inscription to Consus on the outside. This ‘temple’ of Consus in the Circus Maximus was, apparently, only opened during races… There was also a ‘temple’ to Consus at the Circus Maxentius in Rome, and a later temple to Consus on the Aventine Hill in Rome.” [7] The Colchester Archaeological Trust online. The festival of Consus: Today, 12th December. Colchester, Essex, England: The Colchester Archaeologist. Accessed August 2021 at https://www.thecolchesterarchaeologist.co.uk/?p=16928

The Greek historian Dionysius of Halicarnassus (63 BC to approx. 7 BC) gives more detail about the day. He also touches on the confusion that arouse at one point of some people associating Consus with Neptune [Ed: some say this confusion could have arisen because there were horses and statues of dolphins in the circus, both of which are associated with Neptune / Poseidon, but that in any event, there was no actual association]:

“And the Romans even to my day continued to celebrate the festival then instituted by Romulus, calling it the Consualia in the course of which a subterranean altar, erected near the Circus Maximus, is uncovered by the removal of the soil round about it and honoured with sacrifices and burnt-offerings of first-fruits and a course is run both by horses yoked to chariots and by single horses. The god to whom these honours are paid is called Consus by the Romans, being the same, according to some who render the name into our tongue, as Poseidon Seisichthon or the “Earth-shaker”; and they say that this god was honoured with a subterranean altar because he holds the earth.​ I know also from hearsay another tradition, to the effect that the festival is indeed celebrated in honour of Neptune and the horse-races are held in his honour, but that the subterranean altar was erected later to a certain divinity whose name may not be uttered, who presides over and is the guardian of hidden counsels; for a secret altar has never been erected to Neptune, they say, in any part of the world by either Greeks or barbarians. But it is hard to say what the truth of the matter is.” — Dionysius of Halicarnassus. “Roman Antiquities”. II, 31.