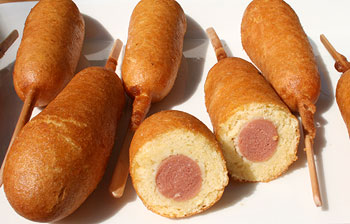 Corn Dogs are hot dog wieners, pork or beef, that are coated in a cornmeal batter and deep fried. Usually, the wiener is put on a stick first, which later is used to hold the Corn Dog while eating it. No hot dog roll is involved at any point.

They are popular at American State Fairs: because of the stick, they are easy to eat while walking around.

For the batter, the cornmeal is usually mixed with some wheat flour, and some baking powder is added for leavener because a good batter should end up light. The soon-to-be Corn Dog just needs frying for 3 to 5 minutes; the wiener requires no separate cooking in advance. Under USDA regulations, there can be up to 65% coating on commercially-prepared ones.

Corn Dogs can be eaten on their own, or with special dipping sauces, or with standard hot dog condiments such as ketchup, relish, mustard, etc.

You can get Corn Dogs at county and state fairs, and at fast food places, or, you can make them at home. You can also get them frozen at supermarkets, ready to heat in the oven or microwave. Variations now offer wieners that are vegetarian, turkey, chicken, etc.

Mini corn dogs are served at bars: stickless, bite-sized corn dogs that you each out of hand.

The wieners’ skin is slippery, so the wieners need to be dredged in wheat flour or cornstarch before being dipping into a batter. If you are still having trouble getting the batter to stick, allow the battered wiener to fry for just a few seconds to cause the layer of batter on it to set, then remove from oil, set aside for a minute or two, then re-dip it in batter. The second coat of batter will stick much better, having the first thin coat to grip onto.

To freeze homemade ones, place on a plate and freeze with space in between them. When frozen, then bag them and freeze.

Corn Dogs evolved over time. They were first wieners baked in corn bread; the evolution to deep-frying and being on-a-stick came later.

Some early versions were simply wieners cooked in a pan of corn bread batter, that you cut out in slices. 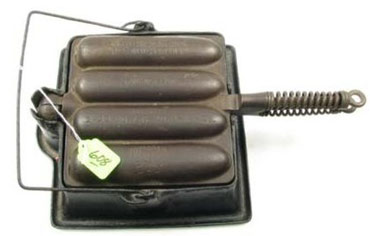 Around 1910, the Wagner Manufacturing Company of Sidney, Ohio added a new item to its line of Wagner Ware cast iron products: what they called the “Krusty Korn Sausage Pan.” It was a kitchen appliance for home use.

An advertisement for the product read: “Cornbread and sausage have always been a famous combination. With these irons, they can be baked together as a full ear of crusty cornbread with a sausage inside. They are as easy and quick to bake as waffles. Other combinations such as wieners in biscuits can be made in these irons.”

You cooked the wieners thoroughly first separately, then put them in corn bread batter into Wagner’s “Krusty Korn Sausage Pan” cast-iron mould that moulded the finished product to resemble an ear of corn. There was a bottom section, and a top. If you had an electric stove, you could use it as is. If you had a wood, coal, gas or other stove, there was a square base for the mould assembly to be placed on. The base could also be used on its own, as a griddle for grilled sandwiches, stove-top quick breads, frying meat, etc.

Note that the items were then baked, not deep fried, and the Corn Dogs were served lying down on a plate, with other food items, not alone on a stick.

In the 1929, the Albert Pick-Barth catalogue (a wholesale catalogue of catering supplies for the food industry) listed the “Krusty Korn Dog” baker: ” ‘Krusty Korn Dog’ baker, also sandwich roaster (grill) or steak fryer. A big money maker! For use on gas, gasoline, oil or coal stoves. ‘Krusty Korn Dogs’ are novel and delicious. The hot dog is baked inside the corn batter, which as it bakes, moulds itself to resemble an ear of corn 6 ⅜″L and 1 ½” diameter. Easy to make: Red hots are first fried in butter, then placed in ‘korn dog’ sections together with required amount of batter, they are then quickly and thoroughly baked together. Baker is made of cast iron, smooth japanned finish, with heavy, sturdy wire coil pan handles.” This appears to be an pretty exact description of the “Krusty Korn Sausage Pan”, perhaps just rebranded or renamed by the catalogue producer. “Krusty Korn” was a trademark owned by WagnerWare. 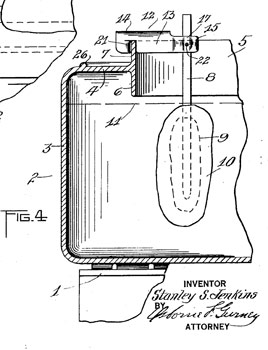 In 1927, a man named Stanley S. Jenkins filed for a patent (which was granted in 1929) for a machine that could be used to fry battered wieners on a stick: “I have discovered that articles of food such, for instance, as wieners, boiled ham, hard boiled eggs, cheese, sliced peaches, pineapples, bananas and like fruit, and cherries, dates, figs, strawberries, etc., when impaled on sticks and dipped in batter, which includes in its ingredients a self rising flour, and then deep fried in a vegetable oil at a temperature of about 390° F., the resultant food product on a stick for a handle is a clean, wholesome and tasty refreshment….. As will be observed the sticks 8, on which the food articles 9 coated with batter 10 are impaled, function both as a means for suspending the coated articles in the cooking medium, and, also, as handles for holding the articles while being eaten. ….If the encased article is a wiener or other partly cooked food, it becomes thoroughly cooked with the batter.”[1] 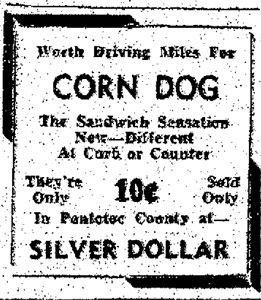 The Silver Dollar Restaurant and Nite Club, north of Ada, Oklahoma on Highway 99, was offering “Corn Dogs” for sale in 1940, both sit-down and curb service. We don’t have any way of knowing for sure, though, what they defined as a “Corn Dog.”

Commercial interest in Corn Dogs as a product was stirring by 1940, as this short piece indicates: Tries “Corn Dogs” Houston, Tex. — (IP) — The headaches of a football mentor will harry Jimmy Kitts no more. Kitts, who was fired at Rice Institute after last year’s disastrous season, has deserted the coaching business. He is promoting a new type of sandwich in Houston — the “corn dog” — a wiener wrapped in corn bread.” [2]

In the 1940 article below, it seems pretty clear that Jack Payne will be using Wagner’s Krusty Korn Dog machine, because his corn dogs will be baked, and resemble an ear of corn. We aren’t certain why what was available everywhere was associated with franchise rights. Note as well the article states that such items were sold a while ago (making it the 1930s) at the Louisiana State Fair. It’s somewhat likely that someone bought a bunch of Wagner’s “Krusty Korn Sausage Pans” and set up a stand at that State Fair.

“The corn dog will soon make its bow in Port Arthur as the city’s newest sandwich treat, according to Jack Payne, proprietor of the Silver Hut, where it will be served to guests in the near future The Silver Hut, located at 4508 Procter, has obtained the exclusive franchise for the corn dog sandwich, Payne stated. “It is destined to be the city’s fastest selling sandwich if it enjoys only half the popularity which it has achieved elsewhere,” Payne says. “Everywhere it has been introduced, it has been an instant hit with both young and old.”

This sandwich innovation is described as a juicy, skinless frankfurter baked in a long cornbread roll on a griddle resembling a waffle iron. The finished product resembles an ear of corn because of the pattern of the griddle. Served with the sandwich will be baked beans and a special delicious sauce, according to Payne.

Only the choicest ingredients go into their making, it is claimed. Fresh eggs, rich milk, quality corn meal and other ingredients are used in making the cornbread. Debut of the corn dog came some time ago at the Louisiana state fair. The idea later sprang to nearby Texas. In the first two weeks they were introduced to Dallas, one single stand sold more than 14,000 corn dogs.

Announcement will be made within the next few days of the corn dog’s debut in Port Arthur at the Silver Hut, just as soon as all preparations have been completed, Payne said. The Silver Hut is always striving to give Port Arthurans something new, different and deliciously good, according to Payne. A few months ago, it introduced the tenderloin trout sandwich here and, since, has sold thousands of them, he claims. The corn dog should make an even greater hit, Payne believes. Many attractive girls are employed by the Silver Hut to serve the large trade it enjoys.” — [3]

Another 1940 note ties notice of baked Corn Dogs with Louisiana: “New Orleans is a variant of the Progress: Introduced recently in [New Orleans] hot dog called the corn dog. Consists of a skinless frankfurter baked in corn batter.” [4] 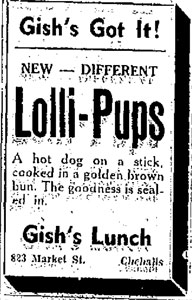 Gish’s lunch of Chehalis, Washington, advertised in May 1946 a hot dog on a stick:

LOLLI-PUPS: A hot dog on a stick, cooked in a golden brown bun. The goodness is sealed in.” [Advertisement in: The Daily Chronicle. Centralia, Washington. 9 May 1946. Page 2.]

But we have no way of knowing if the batter used as Gish’s lunch was wheat, or corn, so we can’t say for sure that this was a Corn Dog.

It is certain that a corn-battered wiener on a stick was being sold commercially by the summer of 1946. Cozy Dogs Drive In of Springfield, Illinois started business selling Corn Dogs on a stick at Lake Springfield Beach House, Illinois on 16 June 1946. They called their Corn Dogs “Cozy Dogs”, and in the fall of 1946, introduced them at the Illinois State Fair.[“Using cocktail forks for sticks, the U.S.O kitchen in which to experiment, we made a very tasty hotdog on a stick, that we called a “crusty cur.” [5]

His daughter-in-law suggests that his inspiration may have come from the Wagner Ware “Krusty Korn Sausage Pan”: “My father-in-law’s version of the story is that he saw one made in a waffle iron and figured there had to be a quicker way to do it,” said current owner Sue Waldmire about founder Ed Waldmire. “He put the hot dog on a stick, his buddy’s dad had a bakery where they made our special batter, he had special fryers made and the rest is history.” [6]

Also in 1946, Dave Barham (born 1913) began selling corn dogs on a stick, deep-fried, from a concession stand at Muscle Beach, California. Though he called his business at first “Party Puffs”, his business would become the franchise now known in America as the “Hot Dog on a Stick” chain.

A Korn Dog franchise opportunity being advertised in 1952. Korn Dogs were advertised throughout the 1950s and 1960s, but fast-food places offering them as “Korn Dogs” seem to drop off by the 1970s. But by then, Corn Dogs — cornmeal battered, deep-fried wieners on a stick — were ubiquitous.

National Corn Dog Day happens annually every March, held in conjunction with the first Saturday of the NCAA Men’s Division I Basketball Championship.