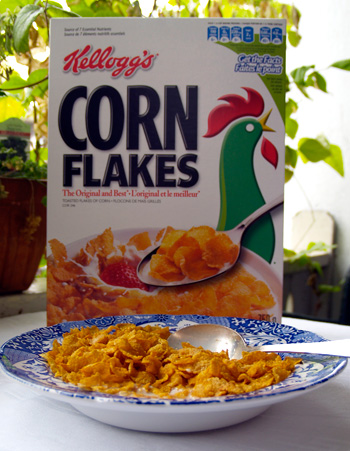 Corn Flakes is a flaked breakfast cereal based on corn, flavoured with sugar, malt, salt, etc, and usually fortified with vitamins. You serve it in a bowl, with cold milk on it.

Corn Flakes is a generic name. Various companies brand theirs by adding their company name, such as “Kellogg’s Corn Flakes” or “Skippy Corn Flakes.” Post Cereals calls theirs “Post Toasties.”

The cereal was first made by the Kellogg’s company

Kellogg’s does not make corn flakes for other companies to sell under other brand names.

In the UK, Kellogg’s Corn Flakes are made in Manchester. It is the largest production plant of Corn Flakes in the world, and operates 24 hours a day, 365 days a year.

The history of Corn Flakes begins with religion. In 1860, the Seventh-Day Adventist church established its headquarters in Battle Creek, Michigan, USA. The Church believed in healthful living, and built a health institute in Battle Creak to promote their dietary ideals, which included vegetarian diets.

John Harvey Kellogg (born 26 February 1852) was the son of a broom-maker, John Preston Kellogg (1806 to 1881) and Ann Janette Stanley (1824 to 1893.) The Kellogg family were Adventists. He became the director of the Battle Creak Institute in 1876. He invented the word “Sanitarium”, and applied the word to the name of the Institute (“The Medical and Surgical Sanitarium”.) The Sanitarium became wildly popular.

William was 34 when the great discovery was made in 1894. Will often helped his brother in experimenting with new ways of preparing nutritious food. The two brothers that year were experimenting with masses of boiled wheat dough, put through rollers to make it into sheets. One night, Will left the dough out overnight before rolling it. The next morning, instead of a flat sheet coming out through the rollers, the dough broke up into flakes. Nothing daunted, he put it on the menu for breakfast for patients at the Sanitarium, and it was a hit — the patients asked for more. In fact, patients wanted the flakes even after they had left the Sanitarium and returned home, so a mail-order business was set up, 15 cents for a 10 ounce (280 g) package. In 1896, Will sold 113,400 pounds (51,450 kg) of the Corn Flakes this way — without any advertising.

John Harvey didn’t want to expand the Corn Flake business: he was afraid that the commercialism would affect his reputation as a doctor. By 1906, however, Will (at the age of 46) decided to go for it. He bought out the commercial rights from his brother, sweetened the flakes with malt (which patients loved but his brother hated on health grounds) and started the Battle Creek Toasted Corn Flake Company.

On Wednesday, 7 June 1907 his first truly major advertising campaign began in New York City. Housewives were told to go wink at their grocer on Wednesday and they would get a free box of Corn Flakes. The city loved the campaign and sales increased 15 times because of it. He then went on to promote other products such as Rice Krispies and All Bran.

Meanwhile, his wife Ella helped to pioneer Home Economics as a field. She founded a school, and published on the topic. One of her books was “Science in the kitchen: a scientific treatise on food substances and their dietetic properties, together with a practical explanation of the principles of healthful cookery. (Battle Creek, Health Publishing Co., 1898.)

William became a multi-millionaire, and during the Great Depression, in 1934, he put most of his fortune, about $66 million US, into a foundation he created, the W.K. Kellogg Foundation.

He died in 1951 at the age of 91. He lost his sight in the final years of his life owing to glaucoma. His guide dog, “Rinson”, was the son of “Rin Tin Tin” the famous dog from the movies.

In 2009, Kellogg’s came up with a way to laser-brand individual corn flakes with their logo. They then considered whether to introduce some of the branded flakes into each box to ensure its authenticity to consumers. As of 2011, the company did not appear to have decided to proceed yet.

This web site generates income from affiliated links and ads at no cost to you to fund continued research · Information on this site is Copyright © 2022· Feel free to cite correctly, but copying whole pages for your website is content theft and will be DCMA'd.
Tagged With: American Food, Cereals