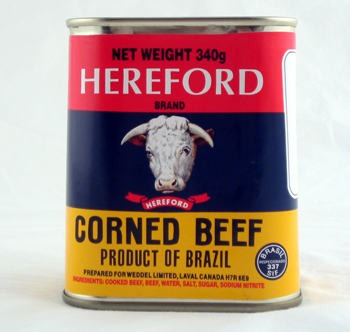 To make Corned Beef, a brine (salt) solution is used to cure a less-tender cut of beef, usually Brisket, but sometimes Rump or Round. Peppercorns and bay leaves are commonly used in the solution to add flavour. The curing process gives the meat a bit of a tangy taste.

The pink colour of Corned Beef used to come from nitrates (usually saltpeter) in the curing process, but with rising concern about nitrates other methods are being used to keep the red colour that consumers expect. The nitrates used to give extra preservative powers to the meat, in addition to colouring it. Homemade Corned Beef without nitrates will generally be greyer, and saltier, as the amount of salt used in the curing has to be increased to compensate for the missing nitrates.

You can buy Corned Beef raw or already cooked: make sure you know which you have bought! Raw Corned Beef is usually sold vacuum packed in plastic. The meat will feel a bit rubbery, but it will feel more like meat after soaking (see cooking tips) or cooking.

Kosher Corned Beef is made with the same general methods, except under rabbinical supervision. It will be from the front half of the cow, not the hindquarter (see entry on Kosher.)

When Brits, Canadians or Australians think of Corned Beef, they usually think of the tinned kind. Americans and Irish are more likely to think of the “fresh” version, which is often used as a deli meat.

Corned Beef still needs cooking, and because it is made of a less-tender cut of beef, it needs long, moist cooking.

Though some Corned Beef is now sold “tenderized” for oven cooking, Corned Beef is generally boiled. Cover with unsalted water, bring to a boil, and then let simmer till a fork can reach the centre and the internal temperature is safe. Allow about 1 hour per pound (450g). If you are cooking a frozen Corned Beef, you can plop it frozen right into the boiling water; just add a few more minutes on at the start to allow for the thawing time in the hot water. 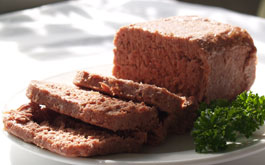 The Corned Beef may still be pink in colour after cooking owing to the curing process. Don’t go by colour; use instead an instant read thermometer to see that the internal temperature reaches 160 F (71 C).

After it is boiled, some people like to stick it in a 350 F (175 C) oven for about fifteen minutes with a glaze on it.

Some people recommend soaking Corned Beef in water in the fridge for 24 hours before cooking, to remove some of the saltiness.

When slicing Corned Beef, always slice thinly against the grain.

If you are slicing tinned Corned Beef and want the slices to remain intact (for instance, for frying), chill the tin well first, and slice thickly. (If you’re in a hurry, pop the tin in the freezer for an hour or two.) A typical way of cooking with the slices is coating them with flour, dipping them carefully in milk or beaten egg, then coating them with bread crumb, and easing them into a hot buttered frying pan until golden brown on both sides. These are sometimes referred to as “corned beef patties.” 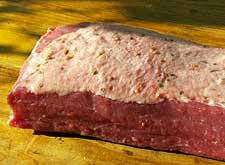 Salt used to be heavily used as a way of preserving meat. Pellets of salt, some the size of kernels of corn, were referred to as “corns” of salt. These were rubbed into the beef to preserve it. Thus, the name “Corned Beef” does not refer to any corn used with the meat, but rather to the method used to preserve it.

Corned Beef became an important export of Ireland, but was not widely eaten in Ireland itself. The demand for export pushed domestic prices up, causing it to be a luxury product in Ireland, making perhaps appearances at Christmas, Easter or St Patrick’s Day, with cabbage.

Note that this Irish corned beef was not the canned variety that the British later exported from South America; these were actual joints of meat, salted and sold whole. All cuts of beef were salted, including neck and shank, though they were sold at lower-grade prices.

From the late 1650s onwards, Ireland started exporting salted beef to the French islands in the Caribbean. Producers of the product in Ireland had an advantage over England, because the salt tax was almost 90% lower in Ireland. Ireland imported its salt from Spain, Portugal and the south-west of France.

50% of the exports went through Cork, with lesser amounts through cities such as Belfast, Dublin and Waterford.

In the 1800s, Irish immigrants to America found that Corned Beef was far more affordable than it had been at home, and so treated themselves to it more often, leading to an American perception that back home in Ireland Corned Beef had also been an everyday food for the Irish.

“Granddad started it over thirty years ago. His son and his son’s sons continue with his original formula, turning out the corned rounds, the corned briskets, the corned navels, the corned spareribs. And the sons and the grandsons of Grandfather Joseph’s customers of the Wall Street district still buy most of their corned beef at this venerable firm in Washington Market. Better corned beef is not to be found in this city.

The corning is done in the old-fashioned manner; that is, the meal is given time in the curing tanks to drink in the brine, just as much as enough. This enough gives a water content of around 5 to 6 per cent in comparison with the 8 to 10 per cent water usually present in meat cured by the pumping system. In (this) newer process, the pickling brine is injected into the meat. Speed is the big idea, as this method takes but six to ten days, while the let-it-soak style requires from two to three weeks.” — Paddleford, Clementine (1898 – 1967). Food Flashes Column. Gourmet Magazine. June 1944.

Parker Bowles, Tom. You can make your own salt beef – just don’t forget to tell your other half you’ll be taking over the fridge. London: Daily Mail. 26 February 2011.

This web site generates income from affiliated links and ads at no cost to you to fund continued research · Information on this site is Copyright © 2022· Feel free to cite correctly, but copying whole pages for your website is content theft and will be DCMA'd.
Tagged With: Beef Round, Corned Beef