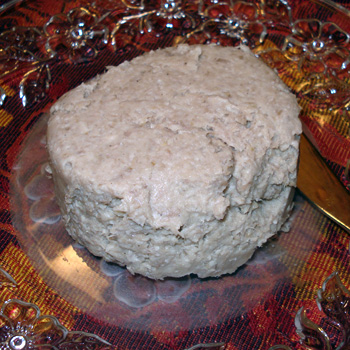 Cretons is a pale potted meat spread made in Québéc. It is also eaten by Acadians.

The texture should be creamy and velvety, not grainy, because traditional recipes were about 30% fat. Modern commercial versions have reduced that to 5 to 17% fat. There are low-fat versions (“Cretons minceur.”)

Cretons are often served at breakfast on toast in Quebec; with Acadians, ployes are traditional (though toast more likely these days.) It can be spread on toast points or on small round toasts as an hors d’oeuvre, or used as a picnic snack.

In some recipes, the ingredients are assembled a step at a time. Lard is first melted then pork is cooked a bit in it. Any rendered fat from the pork is also kept in. Older recipes have you add additional lard on top of all this. Then seasonings are added, along with the rest of ingredients such as milk.

In other recipes, all the ingredients are whacked together in a pot right from the start.

However the ingredients arrive in the pot, they are simmered slowly down, for about an hour to three hours, depending on the recipe. The cooked mixture is then refrigerated until chilled and set. Some recipes, before you chill it, have you mix it when cooked with a mixer, to smooth it.

The fat and meat can come from Hog Jowl. Some recipes add pig bone marrow to add more gelatin smoothness to the end product.

“Cretonnade” refers to Cretons made from a meat other than pork. There are some vegetarian versions made from base ingredients such as lentils.

Some consider the Cretons made in the Kamouraska region of Québec to be the best.

Cretons is often compared to the French dish of “rillettes.”

Cretons was originally made from leaf lard, with no lean pork added at all.

“When I was little we would slaughter a pig and there was this thing called la panne [Ed: “leaf lard”] that covered the ribs that could be pulled off in one piece. My mother would put it in the oven with onion and salt and pepper until it would get crispy. Then she would grind it to make creton. You can’t get la panne easily now, you have to use ground pork but it’s so dry there’s not enough fat. I take ground pork, cracker crumbs, onion, savoury, ground clove, milk, salt and pepper and cook it all up.” — Knight, Ivy. An Acadian Christmas Feast. Retrieved August 2010 from http://www.gremolata.com/Articles/169-An-Acadian-Christmas-Feast.aspx

In this regard, Cretons were very similar to the dish called Cretons made on the island of Jersey:

Later, more refined versions of Cretons evolved, based on ground pork with melted lard added, and after that, lean, healthier versions came along. And then the complaints about dryness started.

Cretons are called “corton” or “gorton” by Maine Acadians.