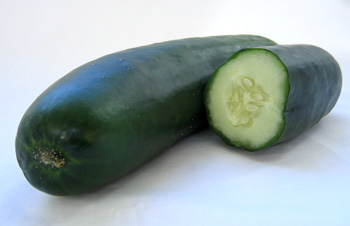 Cucumbers are in the same family as other squashes such as zucchini, pumpkins, watermelon, etc. They have a high water content, which keeps them cool and moist inside. This may be one of the reasons they are such a summertime favourite — and may be where the phrase “cool as a cucumber” comes from.

Cucumbers are classed as either “slicers” (aka slicing or salad cucumbers), “pickling” cucumbers or novelty cucumbers.

English cucumbers are generally treated as slicing cucumbers, with the general opinion being that they don’t stand up well to pickling (though they are fine for relishes.)

Cucumber seeds are soft and edible. Seedless ones are grown in greenhouses — they can’t develop seeds as they haven’t been pollinated. Regular cucumbers are often shipped sealed in wax to preserve their moisture. Long, seedless cucumbers (called “English Cucumbers” in North America) are usually shrink-wrapped instead. They aren’t actually seedless, though: the seeds are just very small and hard to spot. Pickling cucumbers are sold unwaxed to ensure that the acidity being used can penetrate them for safety and taste.

English cucumbers can be eaten without peeling or seeding. The skin is thin on them, which is why they are shipped in protective plastic wrap. While you can eat the skin of other cucumbers as well, many people find the skin of those a bit coarser.

Choose cucumbers that have good green colouring in their skin and are firm to the touch. Thicker cucumbers are likely to have more seeds than thinner ones.

Wash. Wash especially well if they are waxed and you don’t plan to peel them. If you are serving them unpeeled, take a second before slicing, and score the skin lengthwise on all sides with a fork — no particular reason, except they look nice that way.

You can make an old-fashioned sunburn remedy by cutting one up in large chunks and squeezing the juice out of the chunks with a lemon-squeezer. However much juice you get, mix it with equal amounts of glycerine and rose-water, and bottle.

Cucumbers seem to have a particular affinity for dill-weed and sour cream.

Cucumbers can also be cooked (steamed, simmered or baked) for use as a side dish.

Cucumber skin contains lutein and xeazanthin, two carotenoids that can help fight ocular degeneration (such as cataracts) and the resultant blindness. It also contains caffeic acid, an anti-oxidant.

Cucumbers are thought to have originated in the lower Himalayas of Asia.

People have grown cucumbers since about 4000 or 3000 BC. The Egyptians, Greeks and Romans grew them. The Emperor Tiberius reputedly had them on his table throughout the year. The Romans probably ate cucumbers when the vegetable was still young and small, possibly about gherkin size. Cucumbers arrived in France by the 9th Century, and they were common in England by the time of Edward III (1320’s). They fell out of popularity, but came on strong again in the mid-1600s, and the love of the British for their cucumbers is now renowned.

Columbus brought cucumber seeds to the island of Hispaniola in 1494. Their cultivation in the New World spread, to the point that Indians in Florida were growing them in 1539.

Cucumber growing didn’t really take off, though, until the mid 1800s. Cucumbers love to grow in greenhouses, which is where most of them are grown today. Greenhouses require glass, and it wasn’t until 1845 that the tax on glass in Britain was repealed. (The next big greenhouse leap was in the 1880s, with prefabricated cast iron). 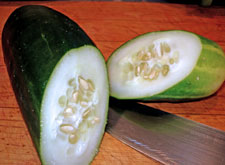 You will see in print and all over the Internet that the internal temperature of cucumbers on the vine can be up 20 F cooler than the outside air temperature on a warm day. It is even cited by writers for agricultural departments of many governments. This has “urban myth” written all over it. First, most of the time, relatively the same wording is used, as people repeat what they have read. The wording usually includes “scientists”; “scientific fact”; or “scientific testing”, which is usually a dead giveaway that science has little to do with this. Many versions have this “fact” being established in the 1500s or in 1615, well before the Fahrenheit scale was invented, never mind even well before Galileo invented the first thermometer. Other people parroting this myth realized that slight anomaly and adjusted it to be “scientific testing in the 1970s”.

Until the late Victorian period, many people in Britain believed that cucumbers were poisonous. Some people surmised that the poison resided mainly in the skin, but that some of it was in the flesh of the cucumber as well. It was only after the general belief about cucumbers being poisonous eroded that cucumber sandwiches became popular. Over time, however, as the poison belief eroded, it was replaced with another vague belief in some people’s families that what their grandmothers had labelled poison was just a bitterness, but one which nevertheless had to be dealt with just as thoroughly.

Various rites were performed to exorcise the poison. Some felt that scoring the cucumber with a fork would let the poison or bitterness drain off, though people couldn’t quite explain where it was supposed to drain off to, and why there was never anything visible draining off to see. Other methods involved cutting off the ends of the cucumber, and using those cut off bits to rub each end until the ends appeared frothy. This would either draw out the poison, or draw out the bitterness, depending on the school of thought. Some felt that cutting and rubbing a piece from the stem end alone was necessary. The more froth it made, the more bitterness or poison there had been in that particular cucumber that needed drawing out, really vindicating your efforts. Then you rinsed away the froth under running water.

A related superstition was that before pickling cucumbers to make pickles, you needed to trim a thin piece off the end that the flower would have grown on in order to remove the bitterness in that end. This superstition is actually right, though for the wrong reasons: it’s enzymes in that area of the cucumber that can cause pickles to go soft.

Barb Ingham, of the University of Wisconsin Extension service, writes:

Remove a thin slice (1/16″) from the blossom end of each cucumber prior to pickling. Enzymes which cause softening are concentrated in the blossom end.” [1] Ingham, Barb. Safe Preserving: Grape Leaves, Alum and Old Wive’s Tales. University of Wisconsin Extension. Blog posting 18 September 2013. Accessed March 2015.

The bitterness myth made it over to North America, where the poison or bitterness extraction rites are still performed in secret in a dwindling number of households even for cucumbers not being pickled. In some parts, the myth has been updated further: in these versions, what the process does is makes cucumbers less “gassy” when digested.

The writer Samuel Johnson was not a fan of cucumbers. He held that “a cucumber should be well sliced, and dressed with pepper and vinegar, and then thrown out, as good for nothing.”

This web site generates income from affiliated links and ads at no cost to you to fund continued research · Information on this site is Copyright © 2023· Feel free to cite correctly, but copying whole pages for your website is content theft and will be DCMA'd.
Tagged With: Ancient Egypt, Ancient Greece, Cucumbers, Roman Food