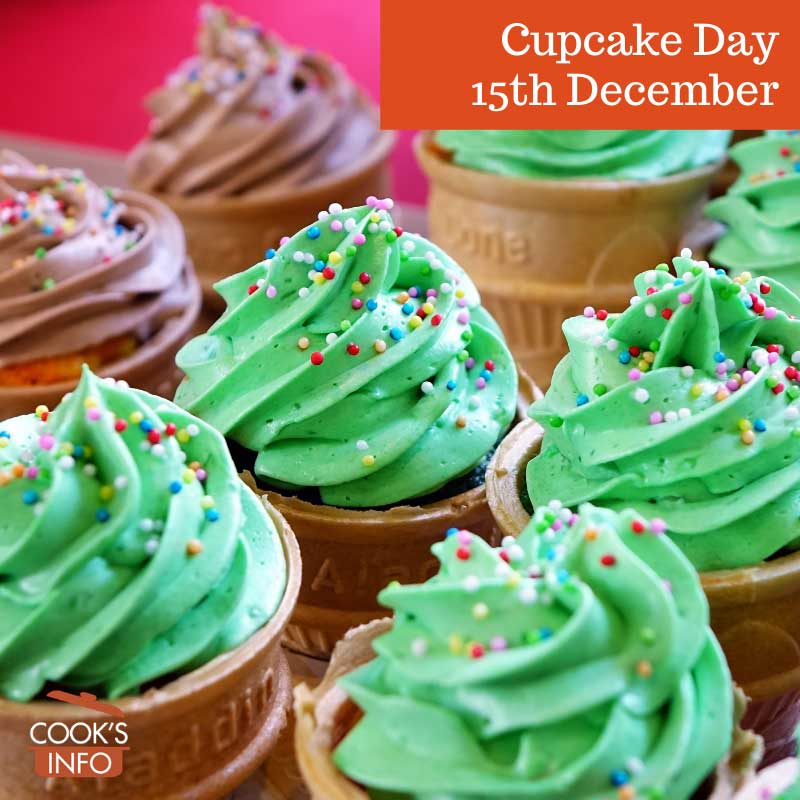 The 15th of December is Cupcake Day.

This is a very easy food day to celebrate, as cupcakes can be bought anywhere, and are very affordable.

Or, you can bake some at home and share with family, friends and neighbours; you might also bring some into work to share with your coworkers.

Cupcakes used to be boring, and dry, but there are so many flavours to choose from now. It’s not just vanilla or chocolate anymore: there are many unique flavours now, such as coffee and bacon, peanut butter and jelly, Oreo, etc.

There’s also a lot of variety in plain or frosted, with or without sprinkles or other toppings.

There are also many ways to get freebies now on Cupcake Day. Some bakeries will be giving out free cupcakes: some with a purchase, some without.

However, instead of merely hunting for freebies, you may wish instead to prioritize buying from a local bakery, to both treat yourself and to support them at the same time to make everyone’s day!

A National Cupcake Day was celebrated in October from approximately about 2000 to 2009.

Somewhere along the way, that got merged with Lemon Cupcake Day, and assumed its December date.

The first print media mention that CooksInfo is aware of for a Cupcake Day on the 15th of December dates from 2009 in Florida:

“This week, as our nation sort of celebrated National Cupcake Day (Tuesday[15th December]), we treated ourselves to cupcakes from five companies offering to ship their goodies right to our door.” — Saunders, Kathy. Taster’s Choice. St Petersburg, Florida: Tampa Bay Times. Page 3B, col. 1

From then on, it was firmly associated with the 15th of December.

As early as 2010, it has also been associated with charitable causes. Here’s one in 2010 to raise food for a local charity:

“Maggie Moo’s is hosting Cans for Cupcakes in conjunction with National Cupcake Day 3 to 7 p.m. Wednesday, Dec. 15. Bring in any canned good and receive a sample of an ice cream cupcake. The canned goods will be going to a local charity.” — Coming Soon. Rock Hill, South Carolina: The Herald. Page 2A, col. 4.