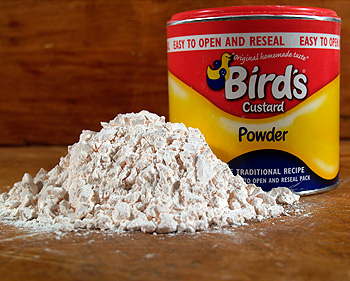 Contents hide
Custard Powder is not actually custard which has been dried into a powder. It’s mostly a starch that has been coloured yellow, sweetened and flavoured so that when hot milk is added the starch will make not only thicken the liquid, as a starch is bound to do anyway, but to give it the right colour, taste, and aroma for a custard-like sauce.

There are several name brands of Custard Powder, and many stores sell their own brands as well. When you mention Custard Powder, though, it’s probably very hard for someone not to picture the red, yellow and blue cardboard tins that say “Bird’s” on them.

Bird’s Custard Powder is based on corn starch. The starches that other Custard Powder brands use include tapioca or sago starch. The ingredient list for a British tin, as of 2010, reads: cornflour (aka cornstarch), salt, colour (annatto), flavouring. The container also says, “Contains no artificial colours.”

Some say the version of Bird’s made in North America doesn’t taste as good as the version made in Britain.

Whatever the brand of Custard Powder, though, whether Bird’s or another, the ingredients are very similar to a North American Vanilla Pudding Mix.

You stir the Custard Powder into boiling milk, and add sugar. You can use whole or skim milk. For thicker custards, use a full-fat milk, condensed milk, or a thinner milk with some instant powdered milk stirred in. The containers will give you exact proportions to use. If it turns out too thin on you, you can always add cornstarch (mix a teaspoon of cornstarch with a teaspoon of cold milk before adding).

Because Custard Powder has no eggs in it, there is no danger of it curdling on you as real custard can. 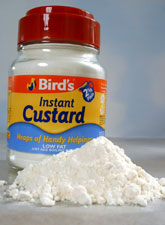 Custard Powder was invented by Alfred Bird in Birmingham, England in 1837 for his wife who couldn’t eat eggs. He began marketing it across the UK in 1844. In 1947, Bird’s became part of General Foods. By 1988, through various mergers and acquisitions, it had become part of the Kraft line until the fall of 2004, when it was sold to the company called “Premier Foods”.

Custard Powder dust is actually explosive (as is flour and sugar dust.) The dust has to first form a dust cloud, which if ignited in a confined space will explode. The organic particles in such dust clouds combust almost instantly, releasing carbon dioxide and steam in an explosion.