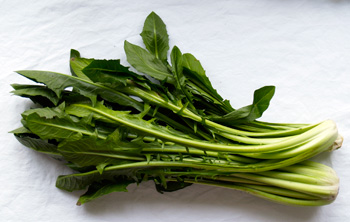 Dandelion is a perennial herb, though it dies back in winter. It is a member of the sunflower family, and closely related to chicory.

The leaves are crisp, and have a peppery taste. They can be used as a salad or pot herb. In Europe, there are cultivated varieties, whose leaves are longer, larger, and more tender.

The flowers have a bittersweet flavour. They can be used fresh in salads, used to make tempura, steamed, pickled, or used to make wine (the small green leaves at the base of the flower are too bitter; discard those.) The taproot is edible, too, but it is best harvested during the winter. If you are harvesting the tap root for folk-medicinal purposes, people advise the opposite — the height of summer — when they are at their most bitter. The roots need to be cooked in soups, or roasted and ground for “coffee.”

The flower head disperses seeds by changing quickly into a white fluffy seed head. Each seed is attached to a bit of fluff, that acts as a parachute to carry it in the wind.

The plant gives off a milky sap when the flower stalk or tap root is broken.

When picking Dandelions from the wild, be sure you know that they weren’t sprayed with chemicals. They are best picked in the spring when the leaves are small and before the plant has flowered. The taste of the leaves will be sweeter then. Granted, this is very difficult to do, as the flower stalks seem to shoot up just as the plant is getting its first few leaves. The leaves are also sweeter in late fall after a frost.

The bitterness in Dandelion leaves comes from a compound called “sesquiterpenes.” The more sun Dandelions have to grow in, the more bitter the leaves will be.

Even when picked young and delicate from the wild, the leaves for most people still taste vile, and among those who do eat them, many feel that the leaves are too bitter to be eaten fresh in a salad. The way they were used in “salad” in the American South was to have hot bacon grease poured over them, sprinkled with chopped cooked bacon and chopped boiled eggs, and a bit of salt and vinegar to taste. Those who do eat them fresh and say they aren’t bitter may have educated their palates to be okay with that level of bitterness.

If using Dandelion leaves in a fresh salad, try having them less than ⅕th of the greens in the salad, and chop them up and sprinkle them around. Other ingredients such as vinegar, fat, sugar, etc, distract your taste buds, so that the bitter becomes less prominent.

Some say to place a flower pot “with holes punched in it” over the dandelion for two days before picking it, to blanch it (though it’s difficult to know how you “punch holes” in a clay flowerpot and still have a flowerpot, or stop plastic ones from just blowing away.)

Many people say they can’t figure out why you’d bother with any of this or with Dandelions at all, if you live anywhere near a supermarket.

They are a bit of a diuretic, so you may not want to eat a feast of them before sitting down for a long symphony concert.

Introduced into North America from Europe.

Dandelion comes from the Old French name for them, “Dent-de-lion.”

This web site generates income from affiliated links and ads at no cost to you to fund continued research · Information on this site is Copyright © 2022· Feel free to cite correctly, but copying whole pages for your website is content theft and will be DCMA'd.
Tagged With: Leafy Vegetables