Dates are a fruit of a particular palm tree — the Phoenix palm. The trees flourish in hot, near-desert conditions, but are intolerant of temperatures below -7 C (20 degrees F ). When a date tree is happy, it can last at least 200 years. The trees will grow up to 50 cm per year (about 1 ½ feet), reaching about 6 metres ( 20 feet) sometime between their 15th and 20th years. Date trees reproduce by making offshoots from their bases; each tree will only produce about a dozen.

Date trees are either male or female. Both kinds produce flowers that look like white wheat when about 3 years old — though it isn’t apparent whether a tree will be male or female until then. The male flowers are sweet enough to eat; the female flowers taste awful, reputedly, but they are the only ones that bear fruit. The trees begun blossoming at the end of February, and are both in full bloom by mid-March. At that point, blossom sprigs from male trees are grafted onto the female trees so that insects can then cross-pollinate them. One male tree supplies enough pollen for up to 50 females. There are other methods of pollination — such as blowing male pollen on the female flowers through a long tube — but in any event, apparently it was the Babylonians who first hit upon the idea of manual pollination to control the quality of the fruit.

By its fourth year, a female date may start to produce a few dates. More will be produced in by its sixth year, but the tree won’t hit its stride in production until 8 to 10 years old. At that point, the tree will continue being productive until it becomes about a hundred years old, though productivity will start to diminish when the tree is sixty to eighty years old. The problem with trees this old, though, is that the fruit may be too high up harvest. A date tree will only bear flowers (and thus fruit) at the top, which is its “growth point”, but trimming the top will kill the tree. Growers consequently will often cut trees down when they reach 50 feet (15 metres), because harvesting them becomes unmanageable.

The date is a single large seed that takes about six to seven months to develop. The pits are not lignin (a woody substance) as they are for many other fruits, but rather “hemicelluloses” which provide a food source to new plants. Dates are harvested by hand because they mature at different times. One tree can produce up to 300 pounds of dates (135 kg.)

Raising dates remains very labour intensive. The plants must be climbed six to eight times a year, to cut off dead leaves, to pollinate them, and to gather the fruit. Thus, their price has remained fairly constant even while the price of other fruit has fallen.

When unripe, dates are green. This is called the “kimri” stage.

When ripe (but not yet dried), dates are at the “khalal” stage. They are sold in the Middle East at this stage. To Western tastes, these are hard and bitter and have a funny texture.

The next stage is when they have “matured” — alright, started to rot. This is called the “rutab” stage. They turn a light brown, and become soft with a nice texture.

The stage at which we in the UK and North America prefer them is the final stage, “tamar.” Dark brown, basically rotted, wrinkly and somewhat dried. The Dates are usually allowed to dry out right on the tree, then harvested. They are usually rehydrated before being sold. 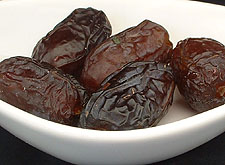 Medjool (aka mejhoul) is the variety most seen in gift trays and baskets, and for dates to eat out of hand.

The fruit is 7 to 8 cm (about 3 inches) long and quite soft, with small seeds. The trees take a long time to get started, but its dates are considered very desirable and consequently fetch a good price.

The most popular date variety grown in the U.S. is Deglet Noor, which was brought over from Algeria in 1913. It is usually used in cooking.

Halawy dates are small and when dry, very wrinkled and a light golden colour. They are very sweet, and feel like toffee in your mouth.

When fresh dates are referred to in Western recipes, it means dried, but not cooked.

When chopping dates, spraying your chopping knife first with cooking spray, and the job will be easier.

Up to 80% of a date is sugar. The rest is various small amounts of fibre, protein, fat, vitamins, and minerals. 5 Dates have about 3 grams of fibre, and contain about 240 mg of potassium — apparently, weight for weight, a better source of potassium than bananas. A pound of dates can pack a hefty 1430 calories — so even though California date producers say their dates are fat free, clearly they still aren’t the ideal diet snack!

Dates were grown throughout the ancient world as early as 6000 BC, in Mesopotamia, India and Egypt. The Arabs spread their cultivation, and in 1765 the Spaniards introduced them to California. Large scale importation to America began in the late 1800s, and the trees thrived in the hot dry areas of the lower Colorado River in California and Arizona. America produces 60 million pounds of dates annually (27 million kg), but even with that, the world’s biggest producer remains Iraq.

“It’s a date that melts in the mouth, so tender the skin and soft the flesh. And all flesh! The seed is a miniature. It is the choice of Persian royalty, the first date to be packaged to have a name for a trade-mark. So tender this fruit, it requires special handling, careful boxing. See-through tops are used in the 2-pound boxes to show off the dates’ plump little figures. The boxes are specially treated to help preserve the dates’ freshness. All manner of little cares are taken to get the dates marketed in their best condition.

These Persian dates have been grown for centuries in Persia, prized above all other dates by people in those regions. It was with great difficulty that offshoots were secured and planted in California’s Coachella Valley. Now after many years there are enough to be offered in a small way commercially.

Mr. and Mrs. A. W. Connor of Beaumont, California, who control over one hundred acres of grove, pack the Royal Persians. For twenty-six years this couple has been in the date business, formerly selling the Degler Noor by nail order. Now they have switched to the Persian and sell primarily through stores.” — Paddleford, Clementine (1898 – 1967). Food Flashes Column. Gourmet Magazine. February 1950.

This web site generates income from affiliated links and ads at no cost to you to fund continued research · Information on this site is Copyright © 2023· Feel free to cite correctly, but copying whole pages for your website is content theft and will be DCMA'd.
Tagged With: Ancient Greece, Bletting