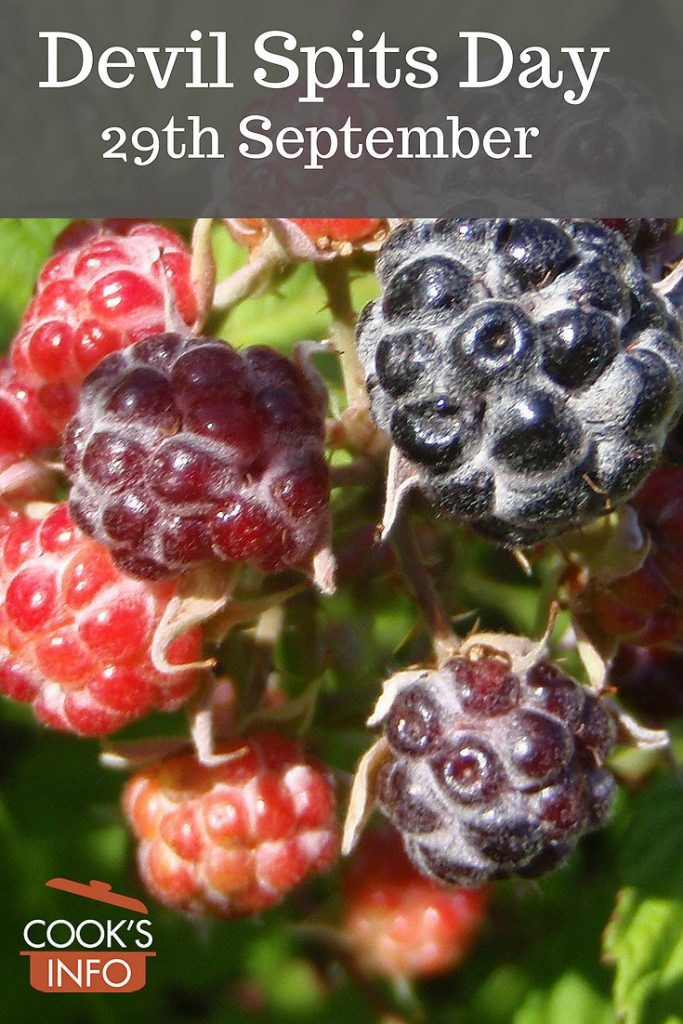 On the night of the 29th of September, the Devil is said to spit on blackberries.

Some versions of the tale say it’s to curse them because when he was kicked out of heaven, he landed in a prickly patch of blackberries. Other versions say it’s to claim them as his own.

Consequently, all blackberries must be gathered by this date. It’s also, conveniently, usually the time past which they have gone mouldy, anyway. The mould that will settle on them this late in the year is the grey botrytis cinerea mould.

Because they looked so awful, they were said to be covered with the Devil’s “spits.”

In some parts of England, the cut-off day for harvesting blackberries was considered to be Michaelmas Day:

“In Sussex, I have heard the superstition [Ed: about the Devil in September] was connected with blackberries. It was held that the devil “puts his paw” upon all blackberries on the last day of September. Perhaps this accounts for their sickly and insipid taste when over-ripe.

In some parts Michaelmas was the particular day, and all children who gather and eat blackberries on that day ‘will fall into great trouble and die before the year is out.’ A farmer’s wife living near Marlborough told me how at Michaelmas, she was making blackberry jam, and not having fruit enough, she asked the woman helping her, ‘to let her children gather more.’ ‘Why this is Michaelmas!’ said the woman in surprise. ‘Well, what of that?’ ‘Why I thought everyone knew that the devil goes his rounds now, and spits on the blackberries, and if anyone picks them they won’t see the year out. No child of mine shall go blackberrying to-day.'” — September Lore. Stockton-on-Tees, Durham: Northern Weekly Gazette. Saturday, 28 September 1929. Page 10, col. 1.

These two home canning recipes are on our satellite site, Healthy Canning: