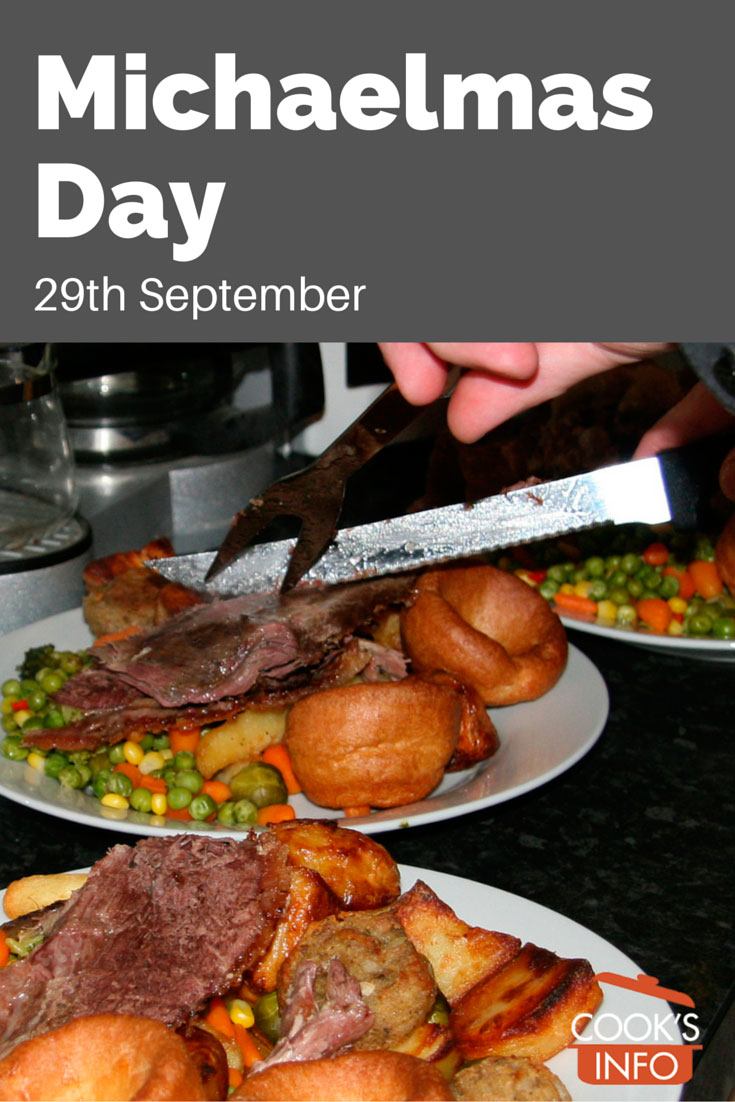 The 29th of September is the feast of St Michael the archangel, who, among other things, is the patron saint of grocers. The feast day is also known as Michaelmas.

Goose is a traditional food on this day.

Michaelmas Day was a major festival during the Middle Ages; in fact, it was one of the quarter days that divided the calendar year into four: Lady Day (March 25th), Midsummer Day (June 24th), Michaelmas Day (September 29th), and Christmas Day (December 25th.) In Sweden, it was an official holiday until 1772.

On Michaelmas, rents were due, employment years ended and began, and school autumn terms started.

Michaelmas marked the start of the winter half of the year. It was the end of fishing season, the start of the hunting season for large game. By now, everyone’s harvest was usually in, so country fairs were held at which the excess could be sold. It was the time to start harvesting apples and making cider.

Geese at this time of year are sometimes called “green geese”. It doesn’t mean that they’re actually green; just younger and smaller than the geese that would be sold later at Christmas. It was considered good luck in Ireland and England to have goose on this day; it was believed that it would help to ensure the next year would be prosperous.

There were many different traditions, food customs and superstitions in different countries in Europe.

In Ireland, they’d make a Michaelmas Pie, and hide a ring in it. Whoever got the ring was destined, it was thought, to be married within the year. The Michaelmas Pie was probably a sweet pie (as goose was usually served as the main course), perhaps apple or blackberry. Irish high society would begin leaving their country estates and return to the city centre for the fall season, bringing desirable streets in Dublin such as Henrietta back to life.

In many countries, today was also considered the day after which it was unwise to pick blackberries, as the devil might have spat on them after today. (See Devil Spits Day.)

On this day, waffles were traditional in France, gnocchi in Italy, and mutton in Estonia.

In Mindanao, Philippines, a parade is still held.

This day is also called the “Feast of St. Michael and All Angels” (for Michael, Gabriel, and Raphael, though in theory, Gabriel has his own day on 24 March and Raphael his on 24 October.)

Some sources state that the Spanish Armada attacking England was defeated on this day in 1588, and that because Elizabeth I was eating goose at the home of Sir Neville Umfreyville at the time, she decreed that henceforth goose should be eaten on this day. She may indeed have had a goose dinner on this day, but it wasn’t the day when the Armada was defeated — that had already happened back in July.

This web site generates income from affiliated links and ads at no cost to you to fund continued research · Information on this site is Copyright © 2022· Feel free to cite correctly, but copying whole pages for your website is content theft and will be DCMA'd.
Tagged With: Goose, Saints