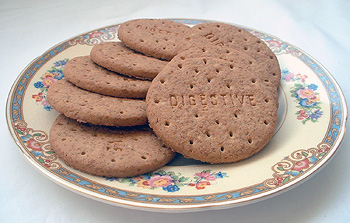 Digestive Biscuits are made from a mix of coarse wholewheat and white flours. They are firm, but still soft (rather than being crisp, like Crackers or Water Biscuits.)

The biscuits are semi-sweet. They can be served as a sweet (you can even buy them already covered with milk chocolate), or you can use the plain ones as a savoury biscuit to be had with cheese.

They are popular in the UK, in Australia, and amongst older people in Canada.

For cooking, Digestives are often crumbled into crumbs for use as bases for cheesecakes, and crusts for pies, etc.

When crumbled for use in cake bases or pie crusts, you can substitute Graham crackers, Breton Palets, or hob knobs.

Once the packet is opened, store in a tin or cookie jar for up to two weeks.

Alexander Grant invented the Digestive Biscuit in 1839 while working for McVitie’s.

McVitie’s originally called them “Homewheat” biscuits because unlike other biscuit makers who were using imported wheat, McVitie’s chose to use British-grown wheat. Though given that half the world was British at the time, it would be worth enquiring further whether that actually meant grown in Britain. The name “Homewheat” was later dropped.

McVitie’s says the name Digestive comes from the Baking Soda in the biscuits, which was presumed to help digest food and settle stomachs.

Baking Soda is a bicarbonate, and so can act as an antacid. It doesn’t seem likely, however, that this effect would transfer through to the packaged biscuit, as the Baking Soda would already have been broken down in the cooking process, leaving it no power to cure indigestion. And after all, no such claim was ever made about Soda Crackers, invented around the same time across the pond in Massachusetts and also made from baking soda.

Other sources say that the name didn’t so much refer to settling stomachs but rather to the use of whole wheat flour: with more fibre than white flour biscuits, it was thought that it would help keep people “regular” in their bowel movements. In this regard, it would be no more a special aid to digestion than would be piously choosing the brown toast with your Denny’s Grand Slam Slugger breakfast.

Though the name has not been changed, McVitie’s no longer makes any special claims to health benefits for this biscuit in regards to digestion.

In late 2001, McVitie’s transferred its production of biscuits from Hatton, near Peterhead, in Aberdeenshire, Scotland, to Halifax, West Yorkshire, England.

This web site generates income from affiliated links and ads at no cost to you to fund continued research · Information on this site is Copyright © 2022· Feel free to cite correctly, but copying whole pages for your website is content theft and will be DCMA'd.
Tagged With: British Food, Digestive Biscuits, Scottish Food