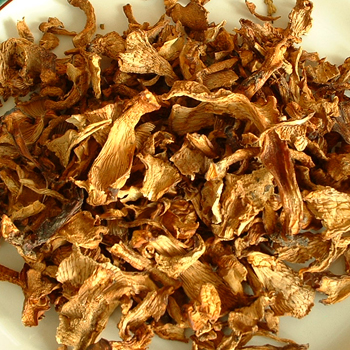 Dried Mushrooms are mushrooms that have been deliberately dried in order to preserve them.

Both wild and cultivated mushrooms are available dried. You can get packages of one single kind of dried mushroom, or packages of mixed varieties of mushrooms. Dried Mushrooms allows easy, year-round access to the flavours of wild mushrooms.

They have a very concentrated flavour. Treat them more as a flavouring agent, rather than as a vegetable ingredient.

Dried Mushrooms can seem expensive, but they actually deliver a better flavour bargain by weight than fresh mushrooms.

Make sure the packages you buy aren’t full of dust — that means the dried mushrooms are so old they are crumbling.

With many dried mushrooms, the best flavour is obtained through very mild simmering for 15 minutes, rather than letting them stand in hot water. Most of the flavour goes into the water, and that is what you should definitely use. Either strain the water through a piece of mesh, cheesecloth or coffee filter paper to get the grit out, or just pour it off carefully to leave the grit behind. Once reconstituted, give the mushrooms a swish in a bowl of fresh warm water, then drain them on paper towels if appropriate for the recipe.

Rehydrated Dried Mushrooms are usually added at the start of cooking to dishes, so that the flavour can seep into other ingredients.

Store in a dry, cool place for up to six months. In a freezer, tightly wrapped, you can store Dried Mushrooms for a year or more.

This web site generates income from affiliated links and ads at no cost to you to fund continued research · Information on this site is Copyright © 2022· Feel free to cite correctly, but copying whole pages for your website is content theft and will be DCMA'd.
Tagged With: Mushrooms