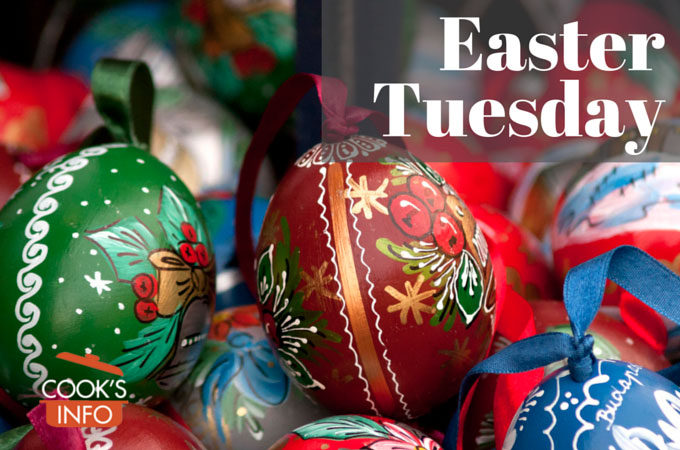 Easter Tuesday is the day after Easter Monday.

In Kraków, Poland it is called Rekawka (meaning “Sleeve” in English, though it’s unclear why it’s called that.) People gather around a small hill in Krakow called the Krakus Mound where legend says Krakus, the first prince — in legend at least — of Kraków is buried. Money, candies and food are thrown from the top of the hill into the crowds below.

In other parts of Poland, the girls get to hit the boys with red willow branches.

In Bristol, England, at the church of St Michael-on-the-Mount, Without, located at the bottom of St Michael’s Hill near the Christmas Steps, Easter Tuesday used to be also Tuppenny (“Twopenny”) Starvers Day. Any child attending morning service today was given the gift of a “tuppenny” bun. (A regular plain old bun cost a penny, but a special, spiced bun cost two pennies i.e. “tuppeny”.) The practice was funded from a bequest left for it in 1739.

The church was called “without” because it was built just outside the city walls. The church was damaged during the Blitz, then restored but finally closed in 1999. Since then, the bun tradition has been picked up by a local primary school. [1] https://calendarcustoms.com/articles/tuppenny-starvers/

Easter Tuesday in 1941 was the night of the Easter Tuesday Blitz in Belfast, Northern Ireland. East Belfast was pounded the entire night by German bombers.

In the Anglican Church calendar, today is also dedicated to Doubting Thomas, the Apostle, who on this day insisted on examining the wounds of the risen Jesus before he would believe he had come back to life.

‘Drama is very important in life: You have to come on with a bang. You never want to go out with a whimper.’ — Julia Child (to Jacques Pepin during ‘Cooking in Concert’)