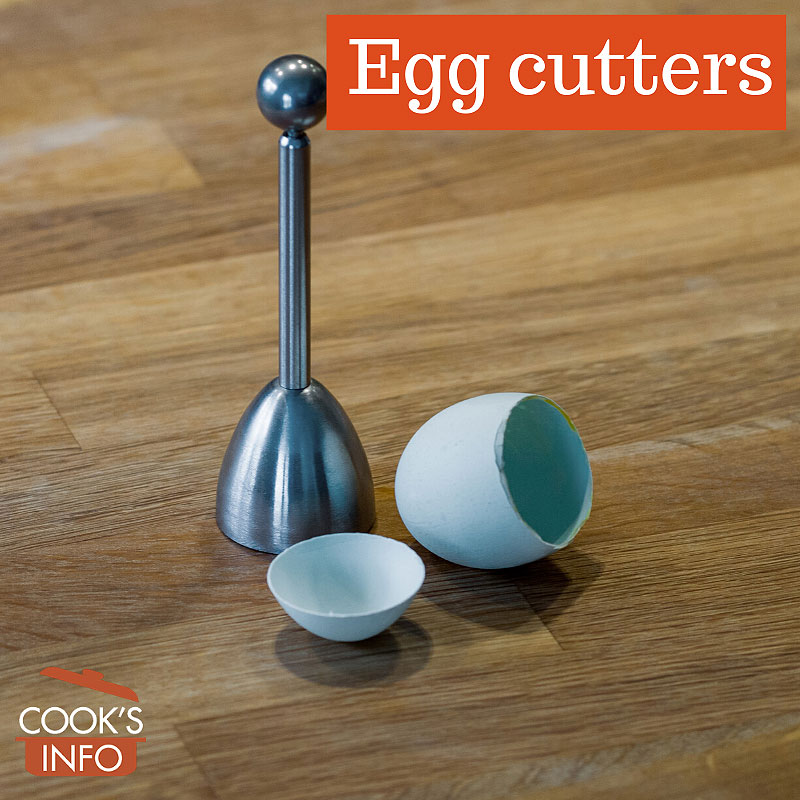 An egg cutter (aka “egg topper”) is not the same as an egg slicer.

While the purpose of an egg slicer is to cut an entire peeled, boiled egg into slices, the purpose of an egg cutter is to slice the top — and just the top — off a boiled egg that hasn’t been peeled. It allows a more advanced and refined method of what the rest of us do, which is whacking the top of our boiled eggs repeatedly with the tips of our knives. It saves scalding your fingers, and helps reduce shattered egg shell.

Some are like a hood on a rod. You lower the hood over the top of your egg, and let a steel ball on the rod drop down onto the top of the hood. Then you just lift the rod (and the attached hood) away, to reveal that the dropping motion has caused a precision hairline crack to appear around the outside of the top of the egg. Lifting the hood off at the correct angle causes the top of the egg to be removed with the hood. The rods are about 16 cm (6 inches) long. The hood is called the “clack.” This type of egg cutter is best used with large egg, as it seems to take off too much top for smaller ones and create the crack where you’d be getting into the yolk. Germans seem particularly enamoured with this type of egg cutter, and make many different versions of it (some fans will even tell you that the falling steel balls achieve a velocity of 1.77 meters a second.)

A French design (called a “toque oeuf”, “egg cap”) has a hood, but instead of dropping a ball, you pull and release a plunger that snaps back in, causing the shock that creates the crack.

Some egg cutters are like scissors, except that in place of straight blades, the blades are circular. There are many variations on the scissors theme, with some looking like cigar cutters. One type looks like a plastic cello-tape dispenser and you’d be hard pressed to know what it was for unless someone told you.

Some egg cutters are a ring with teeth on the inside circle. You press on two handles on either side of the outside of the ring, which press the teeth in on the egg to cut it.

Egg cutters were made in the 1800s of nickel-plated brass or sterling silver.

This web site generates income from affiliated links and ads at no cost to you to fund continued research · Information on this site is Copyright © 2021· Feel free to cite correctly, but copying whole pages for your website is content theft and will be DCMA'd.
Tagged With: Egg Cups, Egg Slicers, Eggs