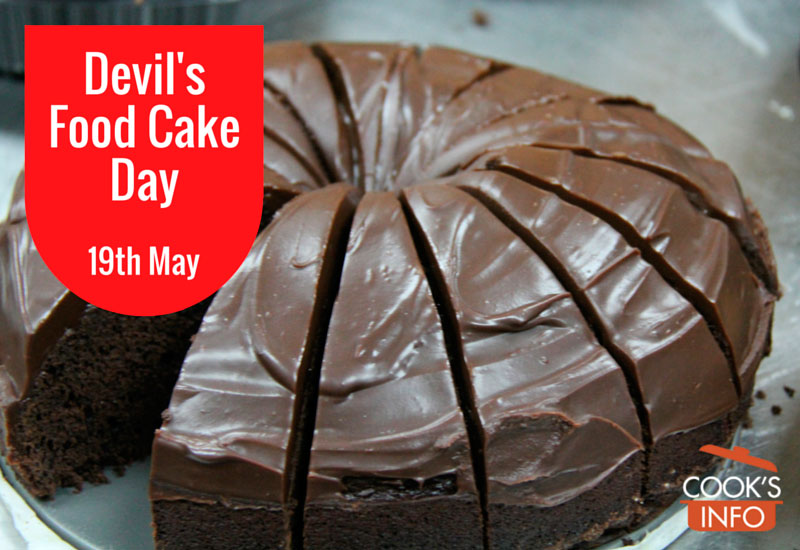 The 19th of May is Devil’s Food Cake Day.

When’s the last time you had devil’s food cake?

Maybe devil’s food cake seems quaint now, at a time when cakes have to be professionally decorated and excessive in every way to even register on our consciousness, but for decades, it was the big thing in desserts, a real treat to make and show off, and to enjoy.

Up until the 1970s, it was the ultimate in chocolate cake, and usually made at home. But then a food scare in the 1970s caused people to stop making it, and by the 1980s, its place had been taken by cakes such as “Death by Chocolate”, usually bought.

You can honour the day by making one, even from a mix, if time is pressing. Folks in Canada may be able to make it to serve at a Victoria Day dinner party, which occurs around this time of year in their country.

And check out CooksInfo’s entry on devil’s food cake for answers on questions such as the following:

It was also on this day, in 1962, that Marilyn Monroe sang “Happy Birthday Mr President” to J.F. Kennedy at Madison Square Garden in New York City.

The first print mention that CooksInfo has found of a “Devil’s Food Cake Day” in May dates from 2014 in Montana:

“Sunday, the 18th the Augusta Baptist and United Methodist churches did services for us. Monday [Ed: the 19th], we made devil’s food cake in Cooking Club in honor of it being National Devil’s Food Cake Day…..” — Kropf, Sharmen. Teton Medical Center News. Fairfield, Montana: The Fairfield Times. 29 May 2014. Page 5, Col. 1.

The holiday was circulating on the Internet, though, since at least 2004, which is when CooksInfo first reported on it.