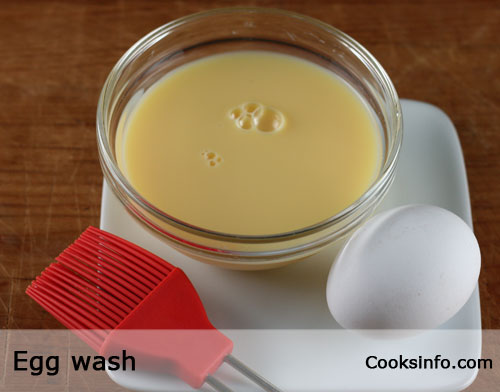 Contents hide
An egg wash in cooking is a liquid mixture based on raw egg used to brown pies, etc. You vary the mixture easily to achieve exactly the effect you want.

How to make an egg wash

First, a summary of the principles. Sometimes you may use the whole egg, just the yolk, or just the white (the egg is usually chicken egg.) The more yolk, the darker the finish on a baked good. The liquid is usually milk or water. The less liquid, the crisper the finish on a baked good. Salt in an egg wash helps break down the protein in the eggs, helping crumb coatings, etc, stick better to the wash. Ground spices such as cinnamon or nutmeg adds surface flavouring and a bit of colouring.

1 egg white on its own, lightly beatenBinder for a coating

1 whole egg, few dashes of salt
Generally, a 1-egg mixture is enough for most applications (such as a pie) unless you are batch cooking or dipping many items in a coating. In which case, double or triple the ingredients in the above table.

Heavy Cream, as much as neededMatte, golden colour

Single Cream or half and half, as much as neededFaint shine, golden-brown

Olive Oil, as much as needed

Understanding the different types of effects you can achieve with an egg wash helps you pick the right ingredients for it.

Egg wash as a surface browner

When used to finish the surface of something, the mixture is brushed on (“washed on” if you will, hence the name) prior to its being baked, usually an item with a crust such as pies, bread rolls, breads, Cornish pasties, empanadas, etc.

Egg wash as a binder

Egg wash as a sealer

An egg wash can also “seal” the surface of a food item. Some recipes will have you brush the surface of a pastry shell being baked “blind” with egg wash, in order to seal the surface against moisture from the anticipated filling.

Commercial bakers often use an artificial egg wash, sprayed on baked goods before baking as they pass through special applicator machines.

Industrially, an “egg wash powder” is available, but that’s a different item altogether — it’s used to actually wash the shells of fresh, whole eggs straight from the farm. It’s used in the ratio of 1/10 to ½ oz per gallon of 100 F (38 C) water, as the eggs pass through special egg-cleaning machines. It both cleans and sanitizes the shells.

To apply egg wash to a loaf of bread being made and baked in a bread machine, wait for the final rise cycle (you have to get to know your machine first.) You can then either brush it on right in the pan inside the bread machine, or if you want to make sure that none will drip and burn, or if you’re applying messy things like seeds after the egg wash, then just after the bread machine has finished its final punchdown and is about to move into the final rise cycle, take the dough out of the bread pan (leave the machine on), do your work quickly, and then set the dough back in the bread pan inside the machine, egg-washed side up of course.

You almost always have some leftover egg wash: discard if you were using it to brush raw meat or dipping raw meat or fish into it. If not contaminated in any such way, then you can pop it covered into the fridge and incorporate the leftover into scrambled eggs or another recipe in the next day or two.

You can use a commercial egg substitute instead of the wash, such as Egg Beaters™ or Egg Creations™. If the substitute is a liquid one, just use it straight, don’t add any water.

In older days when eggs were dearer, some frugal cooks would just use plain milk as a wash.

Vegan substitutes include soy powder mixed with water, soy milk, or an oil such as olive oil.

This web site generates income from affiliated links and ads at no cost to you to fund continued research · Information on this site is Copyright © 2023· Feel free to cite correctly, but copying whole pages for your website is content theft and will be DCMA'd.
Tagged With: Baking, Eggs, Pastry